The absence of large swaths of trees has had a role in November’s catastrophic landslides, according to academic studies on forest management, but B.C.'s Ministry of Forests contends that measures are in place to mitigate the effects of clearcutting.

Thousands of British Columbians remain displaced following a series of devastating floods and landslides that have swallowed highway roads and entire cities in the southern part of the province.

The floods prompted British Columbia to declare its third state of emergency this year on Nov. 17. The devastation was triggered by an atmospheric river that carried rainfall two times the average amount within a 72-hour period.

As the severity and frequency of extreme weather events increases in B.C., researchers say the long-standing use of clearcut logging has exacerbated the probability of floods.

But one of Vancouver Island’s largest forestry management companies disagrees, maintaining that it is an “effective” system that actually reduces the area of disturbance.

A recent University of British Columbia (UBC) study by XuJian Joe Yu and Younes Alila found that logging can increase the frequency of large floods by up to four times.

Alila is a UBC forestry professor who has been studying the relationship between the forest cover, logging, and hydrology for over 25 years.

“What we are seeing now is just the tip of the iceberg,” he said.

Aggressive forestry practices over the past several decades have resulted in cut rates of up to 60 per cent in some watersheds, said Alila.

The way the province has been managing forests is not only “highly unsustainable,” but regulation and policies do not appreciate how sensitive the hydrology is to these “high cut levels,” he said.

When a forest is removed from a watershed, its canopy is no longer there to intercept precipitation.

“That means you have more rain directly hitting the ground,” said Alila. “And therefore, you have more moisture available for runoff.”

The forest’s canopy also slows down snow melt because it acts like a barrier from the sun’s radiation.

“If you remove the trees, the snowpack is receiving way more solar radiation,” he said. “So, you've got more snow on the ground, but also more energy to melt the snow.”

The location of a cut-block can also greatly contribute to the disruption of hydrology within a watershed, Alila explained. South and west-facing aspects of mountains, for example, are more sensitive to logging than east and north-facing sides.

Global warming only adds to the issue, he said.

“The severity and the frequency of these atmospheric rivers in the fall has now increased as a result of global warming,” said Alila. “Even modest increases in the magnitude of these larger extreme events, like floods, can translate into surprisingly large changes in their frequency. The larger the event, the more frequent it becomes.”

Clearcutting does not cause landslides, says Mosaic

The Ministry of Forests said that harvesting can contribute to flooding because it creates soil conditions less conducive to absorbing water.

“That’s why B.C. uses a science-based reforestation approach to reduce risk of flooding,” the ministry added.

Under the province’s new vision for forests, the ministry said it’s working “to ensure our oldest and most ancient forests are protected, and Indigenous peoples are full partners in sustainable forest management.”

Nuu-chah-nulth Tribal Council President Judith Sayers said she has yet to see this transition. There is recognition by the government, she said, but there are no “concrete” actions yet.

“UNDRIP [The United Nations Declaration on the Rights of Indigenous Peoples] talks about our ability to control, manage and use our own forests,” said Sayers. “And I don't see that reflected in the new forestry policies or law that [the government] is proposing.”

In February, the Sierra Club BC released an independent report by Peter Wood that considered the relationship between B.C.’s forest management and severe climate impacts.

Entitled, “Intact forests, safe communities”, the report disclosed that of the 15 environmental hazards identified in B.C.’s 2019 Strategic Climate Risk Assessment, the majority are influenced by logging.

Jens Wieting, Sierra Club BC senior forest and climate campaigner, said logging was examined “because the B.C. government ignored the role of logging in their 2019 climate risk assessment.”

Clearcutting not only increases the frequency and intensity of forest fires, but it also disrupts the local hydrology and raises the risk of flooding, the report said.

Debris from clearcuts accumulates in and around creek channels, which eventually lets loose under heavy rain, he said.

It tears creek banks, taking mud and all the surrounding debris with it, he added.

“You end up with very large landslides,” Merkel said.

One of the 14 recommendations outlined in the Old Growth Strategic Review suggested developing alternative harvesting methods to clearcutting.

If forests were harvested delicately so the ecosystem’s attributes, structure and function remained intact, Merkel said you can have very little effect on the ecosystem.

“But the standard systems that we use are primarily clearcut,” he said.

Mosaic Forest Management is the timberland manager for TimberWest and Island Timberlands, which have been operating for over 100 years on B.C.’s coast.

“It is a common misconception from the public that clearcutting causes landslides,” a Mosaic spokesperson wrote in an email. “The public has probably seen old stumps that persist for decades and more – all still functioning to support stable slopes. Furthermore, other plants – both planted trees and other forest shrubs and herbs – quickly re-establish on these sites. Mosaic plants trees on average within ten months of harvest. Native shrubs and herbs persist or re-establish after harvesting, and seedlings growing from seed dropped from the original forest also re-establish on these sites. All these forest plants contribute to the soil structure and rooting systems in these areas.”

Mosaic said a variety of factors influence slope stability, including steepness, precipitation, the types of vegetation present, historic disturbance, as well as man-made structures, such as roads and culverts.

“Because these factors, and many others, all come into a geotechnical engineer’s assessment of landslide risk, it would be highly unlikely that any expert would categorically suggest that clearcuts cause landslides,” said Mosaic. “Instead, with today’s professional standards in place and scientific knowledge and legislative framework, it would be more appropriate to say that professional foresters assess landslide risk before proceeding with harvesting activities.”

Clearcutting is commonly used in forest management for a number of reasons, said Mosaic. Some of these include mimicking fire and other types of natural disturbances, providing safer working conditions, managing mature trees that contain forest health issues, as well as providing optimal growing conditions for crops of trees that will be replanted, such as the Douglas-fir.

But Alila maintained that the only way forward is to rethink how we manage forests “before it’s too late.”

“We continue to manage the trees in ways that do not project an appreciation of how sensitive the hydrology is,” he said.

Governments also need to consider the impacts of climate change and land use developments when designing infrastructure, such as bridges and culverts, said Alila.

“We should not continue doing business as usual without accounting for the fact that the flood regime has changed and is continuing to change,” he said. “The past does not represent the future anymore.”

Floods are ‘not surprising’

The Ministry of Transportation stated that “to ensure transportation infrastructure is resilient and adapted to the effects of climate change, including extreme weather events, we must look beyond historical information to future trends and what they might mean for British Columbia.”

The province has undertaken initiatives to evaluate and address potential climate change impacts on transportation infrastructure, the ministry wrote.

Low land and flat areas in watersheds are critical sponges, said Merkel, adding that many have been cleared for roads, houses, agriculture, forestry, and logging.

“It's not surprising that we’re having some of these problems because we've taken out those buffer areas of our landscape,” he said.

Since 2018, the Ministry of Forests said the province has planted over 1 billion trees in its reforestation efforts.

“Replanting harvested areas and those areas ravaged by wildfire and pests is essential to our fight against climate change and rebuilding forest health,” the ministry said.

Although clearcutting is “the most commonly applied” harvesting practice over the last 20 years, the Ministry of Forests noted that in recent years logging represents less than a third of the disturbance caused by wildfires.

“In general, any stand-replacing disturbance, be it through harvesting, wildfires or mountain pine beetle, can contribute to flooding because they create soil conditions less conducive to absorbing water,” said the ministry. “In BC, over 16 million hectares have been affected by the mountain pine beetle, and a record 2.7 million hectares have burned in wildfires over the last 5 years. In comparison, 888,000 hectares were harvested between 2016 and 2020.”

“It's a huge opportunity for all of us,” he said. “But we need real leadership and funding.”

In August, Environment and Climate Change Canada announced an investment of up to $340 million in new funding over the next five years to support Indigenous leadership in nature conservation.

"Indigenous peoples are key partners as we work to protect more nature, conserve biodiversity, and combat the worst effects of climate change,” Jonathan Wilkinson, minister of Environment and Climate Change, said in a release. “We understand that Indigenous peoples have a deep knowledge and understanding of land management, which is why [Indigenous Protected and Conserved Areas] are being established.”

While Sayers said, “there’s never going to be enough money for the amount of work that needs to be done,” she hopes that the federal and provincial governments show more of a willingness to sit at the same table with First Nations.

“I really would like to see the province working more closely with First Nations [to] use our traditional ecological knowledge and Indigenous wisdom,” she said. “We can use our knowledge to restore these forests.” 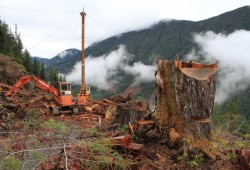 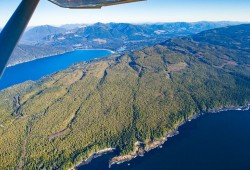 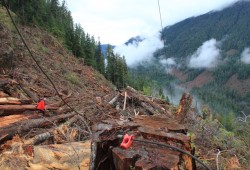