A collection of George Clutesi’s work will be exhibited in Victoria's Batemen Gallery in June, and could go on the road in 2023, including a term at the Alberni Valley Museum.

An exhibit honouring the works of late influential Tseshaht First Nation member George Clutesi will open at the Bateman Gallery in Victoria this June.

Officials from the Bateman Foundation, the Alberni Valley Museum, the University of Victoria and the Royal BC Museum have collaborated with Clutesi family members, Tseshaht speakers and Nuu-chah-nulth cultural advisors in exhibit preparations.

The five Indigenous words after Clutesi’s name in the exhibit title were chosen to reflect his life and work as well as his ongoing legacy as an artist, scholar, educator and activist.

In order, the words translate to: keep/protective, generous, talented, strong willed and treasure.

“I’m always thinking of how small museums can make big change,” said Andrea Walsh, who teaches in the anthropology department at the University of Victoria and believes the Clutesi exhibit can have a significant impact in the community.

Walsh has been tasked with being the curatorial lead on the Clutesi exhibit. She said Peter Ord, the executive director of the Bateman Foundation, which operates the Victoria gallery, approached her about a year and a half ago to see if she would be interested in organizing an exhibit on Indigenous languages or Clutesi.

“I was interested in that because of the work I’ve been doing the last 10 years with survivors of the Alberni Indian Residential School,” she said.

Clutesi, who was born in Port Alberni in 1905, had attended the residential school. He died in 1988.

Clutesi’s family members gave their blessings for the exhibit to proceed.

“They were formally asked if we could go ahead with this exhibition,” Walsh said, adding Deana Clutesi has been designated to serve as the family spokesperson.

More than 20 of Clutesi’s original and reproduced works will be included in the exhibit. These works will be drawings, oil paintings and lino cut prints. These works are currently in the collections of the University of Victoria, the UBC Museum of Anthropology, the Royal BC Museum and the McMichael Canadian Art Collection. The works that will be in the exhibit were created by Clutesi between the early 1940s and the late 1970s.

The exhibit will also feature the work of some contemporary Nuu-chah-nulth artists.

“They are going to be curating work inspired by Clutesi,” Walsh said.

Those whose work will be included in the Clutesi exhibit are three artists from Tla-o-qui-aht First Nation: Hjalmer Wenstob, Timmy Masso and Marika Swan.

Also included will be artwork from Petrina Hildebrand, a member of Mowachaht/Muchalaht First Nation.

The exhibit will also include a film featuring the voices of seven Alberni Indian Residential School survivors, including Samuel.

“I’m really excited about that part of the exhibition,” Walsh said, since it relates to her extensive work with residential school survivors.

Samuel is one of two Ahousaht members included in the film. Mark Atleo is the other one.

The other residential school survivors who share their memories in the film are Fran Tait and Arthur Bolton, who are both Tshimshian, Deborah Cook (Nisga’a), Kathy Lafortune (Pacheedaht) and Gina Laing (Uchucklesaht).

The exhibit will also include some of Clutesi’s writing, which will be interpreted by a pair of Nuu-chah-nulth scholars, Dr. Dawn Smith (Ehattesaht) and Tommy Happynook (Huu-ay-aht).

After its run at the Bateman Gallery this year, there are plans to have the exhibit at the Alberni Valley Museum, starting at some point during the spring of 2023.

Clutesi’s son is the one who requested the exhibit travel to the museum, as it is on Tseshaht First Nation territory.

Walsh said there might be additional travel plans for the exhibit in future years.

“We never thought it would go further than the Bateman Gallery and the Alberni Valley Museum,” she said. “But we’ve had interest (in hosting) from two other B.C. institutions.”

Throughout his life Clutesi had advocated for increased awareness of the values of Nuu-chah-nulth culture to Canada, as well as the retention of traditional knowledge within Nuu-chah-nulth communities.

Clutesi’s work was commissioned for Expo ’67 in Montreal. He was inducted into the Order of Canada in 1973. 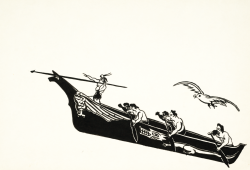