Tsaxana’s “gathering garden” is growing a lot more than vegetables as it enters a third season.

Also known as Sara’s Garden, the community resource represents an old idea given fresh impetus during the pandemic, a means of building greater food security and self-sufficiency for the Mowachaht/Muchalaht community.

Even with a new co-op food store set to open soon in nearby Gold River, the garden will remain an invaluable food source and more for Tsaxana.

A new greenhouse had its first full season of operation last year and proved successful, yielding plenty of cucumbers, tomatoes and hot peppers in addition to field crops such as lettuce, squash, potatoes and leafy greens. Carrots, in contrast, failed due to the intense heat dome of early summer 2021 after a bumper crop in the garden’s first productive year.

This year’s addition will be a pantry, opening May 1, equipped with a work station and small freezer, a place to store preserved food for community use. Garden volunteers managed to put away plenty last fall.

“Whenever we’re working in the garden, the pantry will be open,” Walker said.

But Walker doesn’t measure progress only in terms of crop yields or new amenities. She sees greater value in the eyes of young children, excitement among youth, interest from elders and an essential ingredient she describes as “the golden ticket”: shared knowledge.

“This has been really awesome,” she recalled. “We had a lot of little kids coming through the garden last year. It’s really very cool when they see where food comes from. There were young mothers walking over with children, and just elders coming by, saying, ‘Oh, I want to try this’.”

For the second summer, the garden will provide training and work for half a dozen youth, said Rose Jack, MMFN health director.

“My core is a group of youth and they’re super passionate, super excited and they are the future, the future of food sustainability,” Walker said.

Part of her role as wellness co-ordinator is to teach and guide others in maintaining the garden.

“It’s also about getting back into traditional foods,” she added.

Last season, they collected salmon from fishermen to hold a preserving workshop and managed to put up 240 salmon. MMFN contributed an elk hunting tag, so they can add this to the community pantry.

“The golden ticket there is that the knowledge keepers are sharing,” Walker said. “When we get the elders sharing with the youth, we are passing on knowledge for all future generations.”

With the prospect of pandemic restrictions easing, they are looking ahead to summer and a wild blueberry harvest at Yuquot, Walker said. They also want to expand into traditional medicines.

Rose said she has seen the health benefits that come from a ready supply of fresh greens.

“Having a garden here was very important,” she said, recalling how Sara Fred championed the idea of food security for years. “She worked and worked to get it off the ground and it just never happened.”

“She was a big inspiration. We dedicated and named the garden after her,” Jack said.

Before she passed away in 2020, Fred was able to watch the project finally take root.

A grand opening ceremony will be held on Mother’s Day to honour Fred’s memory and spirit.

“We had been trying to get the community garden off the ground for a number of years, but we didn’t have enough volunteers,” Jack said.

They had grant funding from First Nations Health Authority and Island Health, along with the materials required, but they did not yet have the magic ingredient: community.

“That was my missing link until last year, getting the numbers out,” Walker said. “It’s been a little bit tricky.”

Continued volunteer support will be critical in keeping the garden going, yet the garden produces its own kind of energy.

“It really makes a difference in that community sense of having a common goal,” James said as the garden got going in earnest last year. “We all eat. That’s one of the really core values of ‘indigenuity,’ sharing your food.”

Area residents have galvanized around forming a food co-op in nearby Gold River. The village’s Super Valu store closed six years ago, leaving a major gap and requiring countless more trips to Campbell River for supplies. The 180-kilometre round trip can be “pretty wicked” in winter, Jack noted.

The new co-op will serve not only surrounding communities but also people in Tahsis and Yuquot, said David Humphrey, MMFN financial officer and a co-op board member. They have so far managed to raise $30,000 through sale of $300 lifetime memberships.

“Our magic number was 100 to get started and we got that in January,” Humphrey said.

Since then they have negotiated a lease, purchasing equipment and aiming for an opening date sometime in March.

“It’s getting down to brass tacks now,” Humphrey said. 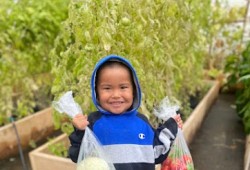 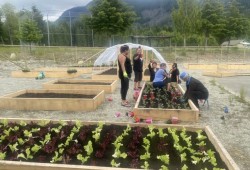