By integrating the natural benefits of kelp, Jordan White and Stevie Dennis are eyeing an opportunity to help the environment while expanding the plant’s capabilities. (Melissa Renwick photos)

Stevie Dennis has always felt a natural affinity towards the sea. Growing up on the west coast of Vancouver Island, he’s spent his entire life working and living on boats. Be it as a commercial fisherman, diver or whale watching guide, he’s tried it all. But nothing called to him in the way kelp has.

That’s why over a year ago, Dennis and his business partner, Jordan White, launched Naas Foods, an Indigenous-led company that produces organic kelp products in Tofino.

Following in the footsteps of Louis Druehl, the first commercial seaweed operator in North America, the co-founders have been working towards building a kelp farm in the Clayoquot Sound for the past three years.

Not only do they see the move as a solution to address food shortages, but  also a way to combat climate change issues.

Seaweed aquaculture is a fast-growing sector of global food production, offering opportunities to mitigate climate change by sucking carbon from the atmosphere.

A 2018 International Panel on Climate Change report suggested that global warming stems, in large part, from excess carbon in the atmosphere.

“Without increased and urgent mitigation ambition in the coming years, leading to a sharp decline in greenhouse gas emissions by 2030, global warming will surpass 1.5 C in the following decades, leading to irreversible loss of the most fragile ecosystems, and crisis after crisis for the most vulnerable people and societies,” the report read.

By integrating the natural benefits of kelp into the everyday, the duo sees it as an opportunity to give back to the environment, while expanding what people think kelp is capable of.

As they wait for an aquatic plant license from the province, Dennis and White remain hopeful to have a kelp farm in the water near Tofino by this time next year.

In the meantime, the entrepreneurs have been using wild bull and giant kelp foraged within traditional Ahousaht territory to create a kelp-based product line.

Although they plan to continue harvesting wild kelp to stay connected to the ecosystem, Dennis said a farm will allow them to relieve some of the pressure from wild species.

Last April marked the launch of their first product, Keltsmaht Kelp – a plant probiotic designed to increase the yield of crops without conventional fertilizers.

Dennis and White tested over 60 variations of the “plant food” before releasing it.

It had quick success and was picked up by garden stores across Vancouver Island, but the kelp enthusiasts were just getting started.

They’ve since expanded their repertoire to include a seafood salad, which west coast residents and visitors can find at local restaurants, including Pluvio, and from local food distributors, like the Tofino Ucluelet Culinary Guild (TUCG).

Bobby Lax, TUCG community food coordinator, said that while the seaweed salad isn’t a “huge seller” yet, he felt it was important to support Dennis and White develop a market for kelp.

“Two things that make food feel good is usually where it comes from, and that it didn’t travel too long to get to you because it still has flavour and freshness,” said Lax.

Naas Foods is holding up food harvested locally as an “important resource that both tastes good and has a ton of health benefit,” he added.

It only made sense that the TUCG integrate kelp into their weekly meal plan and find a way for more people to have it hit their dinner plate, Lax said.

Kelp has only started to become a staple in people’s diets within the past 10 years, said Dennis.

Each year, it becomes more “user friendly,” he said.

Using wood chips from a mill in Chemainus, White said they experimented with 25 different smoke batches before landing on the “perfect combination using a couple of different local woods.”

There are many “cool things you can do with it for food,” he said, adding that as Naas expands, they hope to create replacement products for imported items like pasta.

Establishing a deeper relationship with kelp has highlighted the need to create a food economy that is less reliant on foreign goods, said Dennis.

The COVID-19 pandemic only further solidified that need, he added.

“We need more food security,” he said. “And we need greener ways of working.”

As the benefits of seaweed gain momentum worldwide, “there’s no ceiling” for where the industry can go, said White.

Emulating the underwater ecosystem, Dennis and White are taking an integrative approach to their business.

That’s why it felt like a “no brainer” to incorporate a fresh seafood market into their distribution and storefront, said Dennis.

By buying fresh fish from the five Nuu-chah-nulth nations that comprise the T’aaq-wiihak Fisheries, Dennis said he’s able to support his uncles, cousins and relatives from Ahousaht and his neighbouring nations continue to practice their traditional ways of life.

After processing the fish in-house, Dennis and White tag it, outlining the day it was caught and the fisherman who caught it.

“We’re hoping to bring traceability back to the fishing industry,” said White.

By selling species that are often overlooked, including rockfish, the duo hopes to remove pressure from some of the keystone species, like salmon, which many studies suggest are on the verge of extinction.

“People are on board with the whole seasonality,” said Dennis. “Through the availability of fish that the T’aaq-wiihak can fish for, we can start bridging these gaps.”

Mike David normally works for a nearby fish farm on a harvest boat, but found himself out of work when the boats were sent in for servicing last summer. The Tla-o-qui-aht man started fishing for the T’aaq-wiihak Fisheries instead.

This summer, he plans to take time off from the fish farm to work for the T’aaq-wiihak Fisheries for a second season.

“I made more money fishing than I would have at work,” said David, who grew up fishing.

On any given weekend last summer, Dennis said there could be up to 20 T’aaq-wiihak boats out fishing.

“It’s stimulating an economy that’s growing right here in the community,” he said. “This is food on the table, and clothes on the kids’ backs for school.”

As seafood lovers, providing fresh fish is an offering that they feel passionate about. But when the business partners look ahead, images of rich kelp forests along Vancouver Island’s west clouds their minds.

“It is the future,” White echoed. 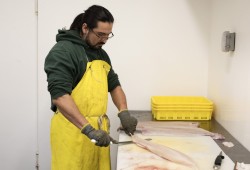