Carver Tim Paul holds his panel, the First Scientist, which will become a part of the Sculpture Garden of Native Science and Learning at the Heron’s Shadow in Sebastopol, California. The Sculpture Garden incorporates Nuu-chah-nulth art to share traditional teachings with a Western audience. (Denise Titian photo)

A group of Indigenous scholars and artists are collaborating on a unique garden that will not only serve as a celebration of art but also act as a teaching tool showcasing traditional knowledge that has been passed down from generation to generation. And they have turned to Nuu-chah-nulth artists to take part in the project.

The Cultural Conservancy and the Native American Academy have partnered to bring to life The Sculpture Garden of Native Science and Learning. It will feature totem poles and other carvings and include spaces where artists can demonstrate their knowledge - not only of carving methods, but also the ancient stories that are incorporated into the art.

Rose Thater Brann-Imai is co-founder and director of The Native American Academy which endeavors to make the Indigenous learning processes and native science visible to the western world. Not only an artist but also a "Native-trained astrophysicist", Brann-Imai is passionate about raising the profile of Indigenous knowledge to the Western world.

“Many of our founders are Canadian,” said Brann-Imai, adding that for the past 25 years she has worked to make the Indigenous world view accessible and understandable to Western-trained minds.

She pointed to the still concerning suicide rate among Indigenous youth.

“That has to be addressed,” she said.

Rose believes in empowering young Indigenous people by showing them the knowledge they hold is key.

According to Rose, Indigenous science and knowledge is everywhere in the form of symbols, glyphs and other art forms.

“That is where our scientific knowledge is contained as opposed to numbers, formulas, books,” she said.

For example, “the planting cycles followed by Indigenous women for centuries emerged from their relationship with the moon and the stars,” reads the Native American Academy website. “They codified their observations in embroidery and weavings. A single piece of cloth carries a knowledge of astronomy, mathematics, chemistry, entomology, etc., and how they relate.”

The Native American Academy was founded by a circle of traditional knowledge holders and aboriginal scholars dedicated to preserving and protecting Indigenous knowledge while bringing to life a 21st century science that is in a respectful relationship with the natural world.

Their work includes the creation of the Sculpture Garden of Native Science and Learning located at the Heron’s Shadow in Sebastopol, California. The garden features totem poles and other carvings along with information that they hope will serve as a library or encyclopedia of Indigenous ways and knowledge.

For Rose, the concept is important because of the holistic and interconnected nature of the Indigenous world view and teaching methods.

“The sculpture garden will provide Indigenous youth with a reflection of themselves in an education system and society that does not recognize their world view, knowledge, or learning processes as valid,” according to the Native American Academy.

“The vision is to teach them how we learn, not necessarily what we know,” Rose told Ha-Shilth-Sa.

In her search for Indigenous carvers, Brann-Imai found a rich source in British Columbia. She met with master carvers Tim Paul of Hesquiaht and Joe Martin of Tla-o-qui-aht.

Paul has been working on his interpretation of a carved panel called the First Scientist. Based on a charcoal drawing by Brann-Imai, the First Scientist is an image of a pregnant woman planting corn. Bran-Imai says Indigenous women were the first to hybridize plants like potatoes, rice and corn to make food and medicine.

Of Paul’s work on the carved panel, Brann-Imai said his selection and knowledge of the cedar itself is science and the tools he uses to create the image demonstrates his knowledge.

For Paul, spirituality is an important part of his culture.

“I’ve been brought up with cultural teachings. The spiritual side of who we are is a big part of what we want to bring out,” he said.

“The elders want to bring forward our connection to nature. My uncle Mo used to say we’ve been given lots (from the elders before us). Don’t keep it to yourself,” Paul shared.

Before Moses Smith died at Tim’s home, he asked Paul to bring him outside so that he could enjoy nature.

“He reminded me put everything out for the young people, everything I have,” Paul recalled.

Paul spoke highly of the grandmothers that so generously shared knowledge with him – Carrie Mickey, Carrie Little, Louise Roberts, Kathy Robinson, to name a few.

Paul’s carving will be displayed in the sculpture garden when it is complete. He said the panel will go to the Native American Academy for them to announce who they are.

“There will be first man and first woman to be shown in the exhibit,” said Paul.

Brann-Imai said the place, Heron’s Shadow, is a learning site that began with the creation of an organic farm. The sculpture garden itself will be a teaching site where artists will work, demonstrating their skills - and if they’re willing - their knowledge, to the public.

“We want to create a physical symbol, a library of knowledge,” said Brann-Imai.

There will be a mobile component to the Sculpture Garden, allowing artists to go to schools or other educational gatherings.

“We want to inspire kids to go to their grammas and look at weavings or embroidery – they might see planting patterns in there,” said Brann-Imai, adding that this could expand a child’s meaning of art.

Brann-Imai is helping to fundraise for the project through the sale of prints of some of her art. She made a set of prints after the first unmarked graves were discovered at former residential school grounds in Kamloops in 2021. The set tells a story of the discovery, the outcry and Indigenous healing.

The series of ten museum quality prints called The Children’s Series are available for sale at https://www.nativeamericanacademy.org/sculpture-garden 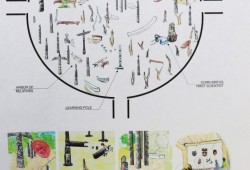 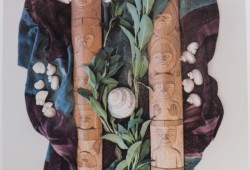