Observations this year from Huu-ay-aht territory see that volume of herring may finally be improving, as the First Nation is reporting a growing number of wild salmon migrating through its rivers.

Amid widespread Pacific salmon declines throughout the West Coast, the reports could be seen as encouraging news for those who subsist off the watershed. Each year the First Nation usually releases approximately 200,000 hatchery-raised smolts, two-year-old salmon that are ready to migrate to the sea, according to the Huu-ay-aht’s Lands and Natural Resources department. But in 2021 wild salmon travelling out to the sea was counted at about 170,000, a number that appears to be approaching the smolts raised in more artificial conditions.

So far this year Chief Councillor Robert Dennis Sr. is seeing a different situation unfold on the water.

“This is the first year that I’ve noticed I caught more wild chinook salmon than hatchery salmon, and even the same thing with coho,” he said, adding that while out fishing this month he saw more schools of herring in the rivers than in many years.

“The herring is making a slow comeback. I’m seeing a lot of needlefish for a change in our territory, I’m seeing a lot of squid again, which was really surprising for me,” continued Dennis. “The smallest fish that I’ve caught this year has maybe been around four pounds, but before that would be the average for this time of the year because there was no food around for the fish. Now when I cut open my salmon they’ve got herring in the stomachs.”

These observations could be seen as encouraging news, as the First Nation is nearly five years into a large-scale initiative to enhance the Sarita and Pachena watersheds. Largely funded by money set aside for every cubic metre of timber harvested from Huu-ay-aht treaty settlement land, the watershed enhancement project is being supported by the industry that was historically responsible for much of the degradation of the First Nation’s rivers and streams.

During an online presentation hosted by the Bamfield Marine Sciences Centre in January, Huu-ay-aht member Larry Johnson addressed how the First Nation has taken a greater role in managing its natural resources.

“For years when I was on council we sat on the outside of forestry watching as forestry development happened within our traditional territory,” reflected Johnson, who currently serves as president of the Nuu-chah-nulth Seafood Development Corporation and chair of the Maa-nulth Treaty Fisheries Committee. “There was around a million cubic metres being harvested, and there we were, we had only four people working in the forest industry.”

A significant shift occurred in 2017, when the First Nation launched more than 20 projects to gain a closer look into the condition of its territory, with enhanced monitoring of salmon species, assessments of the habitat they rely on and examinations of the condition of logging roads.

“We knew we had 35 salmon rivers and streams, but only four had salmon left,” said Johnson. “It was a real good opportunity, from my perspective, to bring Indigenous knowledge and combine it with science, because we look at the world today, and the world is based around science, a lot of science. There needs to be some on the ground values attached to it.”

As a biologist with LGL Limited, Bob Bocking has brought his scientific expertise to the Huu-ay-aht’s enhancement project. In a video released by the First Nation detailing recent watershed renewal work, he points out piles of cut timber that have sat on the Pachena River for over half a century.

“He sorted through all these logs, and chose the nice ones,” said Bocking of the past forestry activity. “This is all cedar that’s been lying in the creek for 50, 60 years.”

In other parts of the river gaps in reforestation are evident.

“A lot of areas, they were not replanted,” said Bocking, who is chair of the Huu-ay-aht’s technical working group on watershed renewal. “They were cut 50 years ago, and all you have is alder growing there.”

To improve fish habitat, approximately a dozen wooden debris structures were installed in the Pachena River in 2021, an ongoing effort to reverse the buildup of gravel in streams when banks are affected by logging. Using big pieces of timber collected from cutblocks combined with boulders and cables anchoring them in place, these structures offer shade and shelter for fish, creating a diversity of pools in an otherwise shallow stream.

Dennis believes that the watershed enhancement project wouldn’t be possible without the Maa-nulth treaty.

“It was our decision under the treaty process that enables us to provide the funding from any harvesting on treaty land,” he said of using a portion of the forestry revenue. “If we didn’t have the treaty land, we wouldn’t be able to allocate dollars to enhancement.”

But it will take more than the First Nation’s enhancement efforts to reverse the effects on its watershed, cautioned Huu-ay-aht Councillor Edward Johnson.

“It’s going to take more than just us to enhance these rivers and bring them back,” he said. “Logging happened all throughout the coast and the Sarita River was our heart and soul. We had great wars about our Sarita River, it was the provider.”

Larry Johnson noted that the First Nation wanted to manage its watersheds “the way we did traditionally, with multiple uses, consistent with our sacred principles.”

“Who we are and what we value is founded in our connection to our lands and our resources,” he said. “If you understand how everything is interconnected, and you learn how to respect it, and you take care of it, you know what it means to me to be a Huu-ay-aht.” 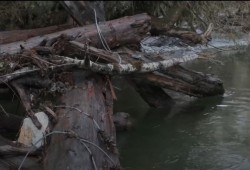 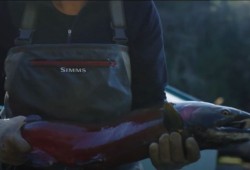