As the government tightens restrictions on salmon farming, an aquaculture company on the West Coast is relying on technological advancements to meet a growing global demand.

In late February Grieg Seafood announced that RAS 34, its new hatchery facility in Gold River, is almost complete. The $25-million project is designed to grow 400 tonnes of Atlantic salmon annually, adding to the 500 tonnes of farmed fish that Grieg can already produce at its adjacent hatchery in Gold River. The new facility’s six tanks are being filled with almost two million litres of water, capacity to house up to four million salmon. The first fish are expected to be added to RAS 34 in April.

What makes this hatchery different from Grieg’s pre-existing facility is the ability to grow fish longer on land. Currently the standard practice is to transfer a two-year-old smolt to ocean net pens once they reach 100 grams. Rocky Boschman, Grieg’s managing director for its B.C. operations, said the RAS 34 hatchery could keep salmon from 500 grams to one kilogram until they’re moved out to the ocean.

“More of our production is moving onto land,” he said. “Currently our production could be between 18 months and 24 months in sea in B.C. We could see that in the future going down to 12 months.”

This shortens the amount of time the farmed fish could be near wild salmon, thereby lessening the transfer of sea lice and other pathogens between the different species.

This winter Grieg introduced another innovation to its pens in Esperanza Inlet to mitigate the environmental hazards of fish farming. These semi-closed containment systems use pen barriers than can be lowered when wild salmon are migrating by the farms, designed to reduce the risk of sea lice passing between the wild and farmed species.

“I hope that it offers people an idea of what the future could look like,” said Boschman of the semi-closed systems, which were previously introduced to the Sunshine Coast. “In some cases we’ve reduced our lice treatments to zero…We found that in a subsequent trial in Esperanza as well.”

Cermaq also introduced a semi-closed containment system to Vancouver Island’s west coast in the fall of 2020. Using a barrier that eliminates lateral interaction between farmed and wild salmon, Cermaq’s system was successfully trialed in Norway before being introduced to the Millar Channel in Ahousaht territory, but one year in the project had to be ended “due to a technical fault and related fish welfare,” stated the company.

“SCCS is immature technology under development, therefore it is not surprising when you are trialing new technology you will run into challenges,” said Dr. Peter McKenzie, Cermaq’s director of Fish Health in a statement from the company. “This was our first attempt to grow fish of varying sizes in a semi-closed environment and unfortunately, due to water quality issues, fish performance was affected and resulted in fish mortality.”

Despite these challenges, such advancements could offer valuable hints as a burning question faces salmon aquaculture in B.C.: How will an industry projected to grow by 4.2 per cent annually manage to remove all open net pens from the ocean by 2025? The removal of open net pens was an election pledge the Liberals used to retain its minority government in last fall’s federal election. It’s also part of Justin Trudeau’s mandate to new Fisheries Minister Joyce Murray, requiring a plan to transition from ocean-based open net pens within three years.

The topic was addressed during the Nuu-chah-nulth Council of Ha’wiih Forum on Fisheries in February, an online meeting that included a large contingent of staff from Fisheries and Oceans Canada. As government and the industry tries to figure out how the aquaculture transition will work, First Nations are being consulted – although some may not be in favour of a government-mandated transformation of the industry. Most fish farms on the B.C. coast are being run through an agreement with the local First Nation, an arrangement that will become a requirement in the province as of this summer.

“We are aware that there are different views among First Nations communities on aquaculture on this coast,” said Amy Marr, regional manager with the net-pen transition team for DFO’s aquaculture management. “We do intend to engage bilaterally over the next year to understand what are their views and interests in aquaculture - not just for marine finfish, but other types of aquaculture.”

“I was shocked to listen to First Nations that are 100 per cent behind fish farms,” said Mowachaht/Muchalaht Hereditary Chief Jerry Jack during the fisheries forum.

Grieg Seafood run sites in Jack’s territory, where he has seen the company attend to the prevalence of sea lice among farmed salmon.

“Grieg is bringing in another ship from Norway, they’re going to have two huge ships here dealing with the sea lice issue,” said Jack. “I don’t really agree with them 100 per cent, but at least they’re acknowledging that there is a problem and they’re dealing with it.”

Meanwhile an aquaculture act is being developed, legislation that some who watch the industry believe is long overdue.

“Right now the rules are purposely vague - there’s quite a bit of loopholes that industry is aware of,” said Jared Dick, a fisheries biologist with the NTC’s Ua-a-thluk department, who also sits on an aquaculture committee with the First Nations Fisheries Council. “Right now is a time for First Nations to engage with DFO and say, ‘Listen, these rules don’t protect our needs and aren’t sufficient to protect our wildlife.’ Right now is a time to rewrite these rules and make them more stringent.”

Boschman welcomes the guidelines that an aquaculture act would bring.

“I think all companies in salmon farming in B.C. would hope to see some sort of stable regulatory regime that would allow us growth,” he said. “The world market for salmon is growing astronomically. Last year the United States grew by 13 per cent.”

But how that growth will be possible amid new restrictions to the industry remains to be seen. The industry suffered a major blow in December 2020, when former fisheries minister Bernadette Jordan announced that 19 farms in the Discovery Islands will not be renewed past June 30 of this year. Another 79 sites – representing most of the pens on the B.C. coast - are up for licence renewal on June 30.

Boschman pondered how aquaculture in B.C. could grow to meet the world’s demand without more farms being added in the future.

The BC Salmon Farmers Association expects that the province’s industry would suffer if additional farms are not added to the coast.

“We will lose market share to imported farmed salmon – most likely from Chile,” stated the association in an email to Ha-Shilth-Sa.

“It’s really up to the federal government – in consultation with our First Nation partners – to change regulations around making a farm, instead of 2,500 tonnes, making it 4,000 tonnes by adding those extra cages,” added Boschman. “In same places you could do that because you’re really confident you’re really not increasing any negative impacts to the environment.”

But amid calls to move the farms onto land, Boschman noted that the industry couldn’t currently afford this transition.

“There’s no business case to support it,” he said, referencing the cost of building the RAS 34 over the last three years to increase land hatchery production. “You see that it’s 400 tonnes for $25 million. If you do the simple math, one of our farms can be about 4,000 tonnes out in the ocean. We have 16 farms.” 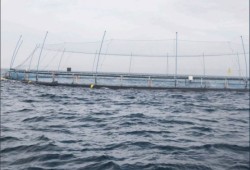 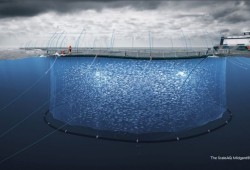