When Mike Roberts looks back on his time attending Alberni District Secondary School (ADSS) in the mid-80s, the Totem Tournament continues to stand out in his mind.

“If you were to ask anybody who has gone to this school to name five things they remember 10 to 20 years from now, I’m going to guess almost everyone will mention Totem,” he said.

It’s part of the fabric of the school, he added.

As the longest running high school basketball tournament in the province, Totem has been passed down through the generations. It’s not only an event for the participating students, but for the grandparents and parents who have gone before them.

That’s why Roberts said it was “crushing” when the province shut it down last year to curve the spread of COVID-19.

Many students felt like they'd been robbed of the experience.

Justin Ferrer was on track to play on the Armada senior boys’ basketball team during his graduating year at ADSS last year, but when the season was cancelled, his dream of playing in Totem vanished.

“I feel like I missed out on such a huge opportunity,” he said. “Everybody missed out in their senior year.”

After this year’s tournament was postponed in late-December due to the rapid rise of infection from the Omicron variant, many students wondered if they too would miss out on their chance to compete.

But when the news came that the 66th annual tournament was back on, Henderson said “we all got hyped.”

“We started cheering like this crowd,” he said, looking around at the packed bleachers inside the school’s gymnasium.

The Totem Tournament kicked off on March 10, and students, family and friends came out in droves to cheer on the Armada athletes.

Spectators were decked out in red and white Totem apparel, along with temporary face tattoos that displayed the tournament’s slogan, “it’s kind of a big deal.”

“It's been a long two years,” said Craig Brooks, Armada senior boys’ basketball team head coach. “Everyone wants normalcy and what is more normal in Port Alberni than the Totem Tournament, even if it is a little bit late?”

Launched in 1955 as a boys’ tournament, Totem expanded to include female teams in 2011.

Now, eight boys’ and eight girls’ teams from around the province annually compete for the title.

After being cancelled last year, Brooks said the tournament was the first time a lot of parents were able to watch their kids play in two years.

“This whole season, parents haven't been able to come watch their kids,” he said. “There’s a lot of excitement.”

Missy Knoll sat on the edge of her seat while watching her son, Blake, from the bleachers. As a former graduate of ADSS, she said she understands first-hand how important the tournament is for the school.

It’s something the kids look forward to, she said.

“They were so worried it wasn’t going to happen,” Knoll said. “And now, it’s all they talk about. It’s an adrenaline rush for them – knowing that all these people are here for them.”

Henderson’s grandparents, Ima Dick and John Campbell, were also in the crowd.

When Henderson moved from Ahousaht First Nation on Flores Island to Port Alberni a couple years ago, Dick said it was a big transition for him.

“It’s exciting to see him play,” said Dick. “To show support for him and encourage him.”

Now, a lot of his “little brothers” look up to him, she said.

“They come to see him and feel the energy,” she added.

“It was so good to feed off of all that energy that everybody gave us,” said senior girls’ Assistant Coach Dennis Bill. “To have our own fans, our own family, and our classmates there to cheer us on was amazing.”

As the girls huddled together after their win, Bill said “happy tears” were shed.

For some of the Grade 12 students, the game marked the end of their basketball careers.

And while it was bittersweet, Bill said “it was the perfect end to the season.” 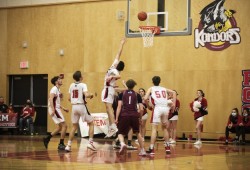 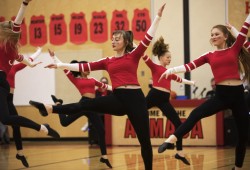 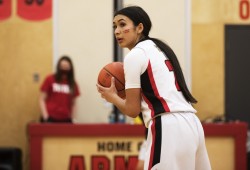