Monthly meals are provided to those in need within Victoria's downtown area, with opportunity to arrange for services. (Denise Titian photos)

A group of Indigenous outreach workers invited the downtown Victoria community to their first-ever seafood feast at the Downtown Community Center on March 16 on Pandora Street.

Co-organizer Herb Dick of Ahousaht joined other service organizations to put the feast together - not only to feed the people, but also to deliver services to at-risk guests.

Dick works as an Indigenous support worker for Island Health in Victoria. He works with other service providers through an umbrella organization called Indigenous Outreach Network. The partners include organizations like Peers, Pacifica, Cool Aid Society, the Aboriginal Coalition to End Homelessness and Our Place.

Together, the workers gathered seafood like salmon, clams and herring eggs.

“We buy crab, fish and clams from local First Nations harvesters, but many donate when they find out what the food is for,” said Dick.

The food is cooked and served up to people that hardly ever get to enjoy a seafood meal, like the Indigenous people who are living on the streets of Victoria or those with low income.

“It’s a little soul food for those who haven't had good ol’ fish soup, bannock or crab – it’s a treat for them,” said Dick.

Organizers managed to collect enough seafood to serve up fish soup, steamed clams, herring eggs and dried seaweed to grateful guests. There were also hotdogs and chili for those who don’t care for seafood. The meal was rounded out with chumus (desserts) and cultural entertainment.

Marilyn Jones of Pacheedaht lives in Victoria during the cold season and said it was her first time to come to the Seafood Feast.

“Oh my God, it means everything to me,” she said of her opportunity to have a free seafood meal. “I haven’t had seafood in forever!”

Marilyn and her daughter Katherine feasted on clams, crab, salmon and herring eggs, calling it delicious.

“It’s been a long time,” he told Ha-Shilth-Sa. “I took a long time eating it…savouring it.”

As people ate, Joe Thomas and his family from Esquimalt First Nation provided entertainment in the form of drumming, dances and stories in the courtyard. Inside the community centre more drumming could be heard as people were invited to take part in brushings. A Nuu-chah-nulth cultural group also provided entertainment at the event.

Dick estimates 160 people were served food that day. The crowd was more than half Indigenous with people from the Nuu-chah-nulth nations of Huu-ay-aht, Ahousaht, Tseshaht and Nuchatlaht along with people from other First Nations.

The meals are provided in downtown Victoria monthly, but this was the first seafood feast. Dick said the event not only allows people a rare chance to fill their bellies with food they love, but also provides an opportunity to connect with necessary services.

“We were able to place two homeless Nuu-chah-nulth people in housing at this event,” said Dick, adding that they had somewhere warm to sleep that night. “There are multiple services agencies working together to connect with the people and provide supports.”

IOW Networks feeds the people once a month. Dick says he has a connection that has donated sea urchins for a future seafood feast.

The IOW Network has a Facebook page for those looking for information about their events or those wishing to donate food. 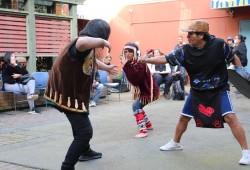