Vancouver Island University Chancellor Judith Sayers was honoured in her new role through a talking stick gifting ceremony on March 24. The talking stick was crafted in the traditional Coast Salish style while paying homage to Sayers’ Nuu-chah-nulth heritage. (VIU photos)

Carved by Ts’usquinuxn (William Good), a hereditary chief and master caver from Snuneymuxw First Nation, the talking stick was crafted in the traditional Coast Salish style while paying homage to Sayers’ Nuu-chah-nulth heritage. It was gifted to Sayers by the University of Victoria, which commissioned the creation of the piece.

Traditionally, talking sticks were carved for a chief as an acknowledgement of their position and prestige within a nation. They would be carved to reflect the clans the chief belonged to, and would be used while giving speeches at potlatches, during ceremonies and sacred events.

It was custom for a chief to have two talking sticks, Ts’usquinuxn described.

A large, long talking stick would be placed on the floor during potlatches, where the chief would deliver speeches. A chief would also carry a smaller talk stick, similar to a sceptre, so everyone knew who they were, Ts’usquinuxn added.

"This is to represent your journey here, your work and to give you the strength that you need to do it,” said Ts’usquinuxn’s daughter, Aunalee.

A halibut and salmon were also included in the carving to represent the wealth and culture Sayers brings to VIU.

During the ceremony at the university’s Nanaimo campus, Ts’usquinuxn’s said he was honoured to carve the talking stick for Sayers.

While addressing the crowd gathering at VIU, Sayers said “my heart is more than full today.”

“It's an amazing, powerful piece of work,” she said, “You have given me a tool to assist me in my role here as chancellor.”

Indigenous people have been struggling to be recognized for so long, said Sayers.

“We mark greatness by whom we include, how we support them to reach their dreams, and how in doing so we allow people to meet their potential,” she said. “We are rooted in this place and we will make Snuneymuxw and the nations we serve proud.”

There are many challenges and barriers to get through in order to change the role Indigenous peoples play in the world of academia, Sayers said.

“[The talking stick] gives me a greater voice,” she said. “An opportunity for a greater voice going forward and helping to be part of the change with all of you. We walk together.” 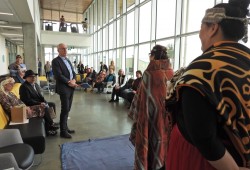 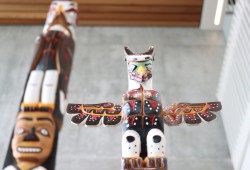