Brenda Johnson (centre) laughs with the youth at the NTC Northern Region Youth Gathering inside the House of Unity, in Tsa'xana, near Gold River, on March 29, 2022. (Melissa Renwick photos)

Linus Lucas Sr. created a Nuu-chah-nulth family tree five years ago to help children and youth in care reconnect with their families.

The senior Quu'asa wellness worker now has a genealogy database filled with approximately 21,000 people with Nuu-chah-nulth roots. Drawing from first-hand knowledge and the Royal BC Museum’s genealogy archives, Lucas said the database contains family records that date back to the mid-1800s.

In effort to encourage Nuu-chah-nulth youth to understand their own family lineage, Lucas attended the NTC Northern Region Youth Gathering at the House of Unity, near Gold River on March 29.

Prior to colonization, Lucas said it was common for grandmothers and elders to sit with children and share stories about the life lessons “they needed to know.”

When the residential school system pulled families apart, many of those teachings were disrupted, he added.

Even if children attended the same school, Lucas said they weren’t allowed to mingle and learn about each other’s family ties.

“I have a lot of relatives that are cohabiting with their own relatives,” said Lucas. “Many of our survivors of residential school don't have the ability to let their own children know who they're related to.”

Margaret Amos was among them and said that traditionally, youth were “constantly” reminded who their relatives were.

Amos said he hopes to rekindle the connection between the nations and their grandmother’s wisdom so that “we know who everybody is.”

Margaret said that since families were disrupted by the residential school system, “many of our children have lost their spirit– their identity as Aboriginal.”

“We have to find a way to instill it in them,” she said.

Part of that work is reconnecting the youth back to themselves through genealogy so they know who they are, said Lucas.

Amos’ 14-year-old daughter, Talishe, joined the youth who attended the four-day event hosted by the Quu'asa wellness team and the Mowachaht/Muchalaht First Nation.

Talishe said she struggles to express her feelings and, because of that, has felt alone for a “very long time.”

But as she’s come to learn more about her family’s history and lineage, Talishe said “it’s helped me to know that I’m not alone.”

“My dad always talks about who he’s related to and it just gets me a little more interested in my family every time he speaks,” she said.

Throughout the day, which began with a talking circle and ended with drumming, singing and dancing, youth stopped by to sit with Lucas and retrace their family history through his genealogy database. Lucas said that after a young boy found out he had roots in Hesquiaht First Nation, he started “puffing” his chest out.

When the youth learn that they have relatives in communities outside their own, “it makes them stand up a little taller,” Lucas said.

Audry Smith attended the gathering as a grandmother with her sister, Jessie Mack. The event was an opportunity to “break the cycle” by sharing the teachings that had been passed down to them.

It’s been two and a half years since a youth gathering was held at the House of Unity due to COVID-19 restrictions, Margaret said.

While it’s going to take a “little while longer” for the community to get their strength back, Margaret said that through daily practice cultural traditions will be rekindled.

But the change won’t happen overnight, she said.

“But what we have is a start,” Margaret added. “It’ll get better.” 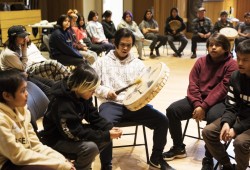 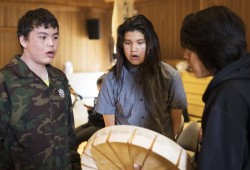