Huu-ay-aht Ha’wilth Jeff Cook stands with Chief Councillor Robert Dennis, as along with Yuułuʔiłʔatḥ, the First Nation marked 10 years with the Alberni-Clayoquot Regional District at its main office in Port Alberni April 13. The two First Nations were the first in B.C. to join a regional district, but several remain in the ACRD without a voting seat. (Eric Plummer photo)

With an emphasis on the path to “economic reconciliation,” April 13 marked 10 years since First Nations gained director status with the Alberni-Clayoquot Regional District.

Leaders from the Yuułuʔiłʔatḥ and the Huu-ay-aht First Nations spoke before a full board meeting on April 13, a decade since they became the first Indigenous communities in the province to gain representation on a regional district.

“It’s been a big step for us to be involved at this level,” said Yuułuʔiłʔatḥ Government President Chuck McCarthy. “We’ve always been told under [Indigenous and North Affairs Canada] what to do, when to do it.”

Alan McCarthy, a legislative member of the Yuułuʔiłʔatḥ Government, noted how the ACRD quickly responded to the Truth and Reconciliation Commission’s Calls to Action.

“This table has supported First Nations issues,” he said.

Alan McCarthy is a survivor of the residential school system, as are Huu-ay-aht Chief Councillor Robert Dennis Sr. and Huu-ay-aht Ha’wilth Jeff Cook, who both attended the Alberni Indian Residential School in the late 1950s and 1960s.

“It was not the best place to be, but it enabled us to get an education,” said Dennis. “For me it was a very bad experience. So bad I remember one time running away.”

As the province reassess the future of its forestry industry, including the deferment of old growth logging in various areas in consultation with First Nations, Dennis emphasized the need for the government to listen to those with deep ancestral ties to the land’s timber.

“We need old growth for our cultural purposes,” he said, warning against calls to halt the harvesting of all old trees. “Cultural genocide, that’s what I call it. Somebody trying to cease my right to practice my culture, and use it for whatever purpose I want to use that cedar tree for.”

In recent years the Huu-ay-aht have gained a growing stake in Tree Farm Licence 44, a large section of Crown land within the First Nation’s territory south of Port Alberni. Dennis calls this newfound control over the Huu-ay-aht’s territorial resources “economic reconciliation”.

“The opportunity is there if we do it right, and doing it right is managing the forest in a good way, including old growth,” he said. “Port Alberni was built on the forestry economy, and we should never lose sight of that. I know people say that it’s a sunset industry. Maybe it is, but there’s still opportunities.”

After the Huu-ay-aht and Yuułuʔiłʔatḥ joined the ACRD in 2012 the Uchucklesaht Tribe would follow in February 2014, as did the Toquaht Nation in October 2016. In Vancouver Island’s north the Ka:'yu:'k't'h'/Che:k'tles7et'h' First Nations, the fifth signatory to the Maa-nulth treaty, joined the Strathcona Regional District one year ago.

Penny Cote, Sproat Lake’s ACRD director of 17 years, called the movement of First Nations joining the regional district “one of the biggest events that’s ever happened in my career.”

But other First Nations still have yet to gain voting status with the ACRD, including the Tseshaht and Hupacasath in Port Alberni.

“I would like to see all First Nations in our community participate in the regional district and have a voice and a full vote,” said Dr. Kel Roberts, who represents Long Beach. “Whether they’re treaty nations or not, it’s extremely important.”

“Huu-ay-aht and Yuułuʔiłʔatḥ are a model for Canada, but there’s a lot to be done,” added Courtenay-Alberni MP Gord Johns. “Nations shouldn’t have to be in treaty to have a seat at the table.” 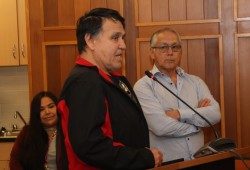