Hasheukumiss is speaking up with a coalition in favour of keeping salmon farms for the benefit of local First Nations. Here he is pictured during an event hosted by the Coalition of First Nations for Finfish Stewardship on March 21. (Youtube video still)

In two and a half months salmon farms throughout the B.C. coast are due to expire, with no firm commitment yet from the federal government to renew these licences.

But as uncertainty hangs over the controversial industry, the man speaking for Ahousaht’s Tyee is standing in support of aquaculture in his territory, with a claim that a failure from the government to support salmon farms in Ahousaht waters will betray commitments to reconciliation with First Nations.

“Cermaq has done more for wild salmon conservation and restoration in our territory than the federal or provincial governments combined,” said Hasheukumiss (Richard George), who is standing in for his father, Ahousaht Tyee Ha’wilth Maquinna (Lewis George).

Cermaq runs 14 sites in Clayoquot Sound, which are among the 79 salmon farming licences up for renewal on June 30. As Fisheries and Oceans Canada undergoes consultations with coastal First Nations this year on the future of salmon farming in the province, Minister Joyce Murray is operating under a mandate to make “a responsible plan to transition from open net-pen salmon farming in coastal British Columbia by 2025,” according to the directive delivered by Prime Minister Justin Trudeau.

For years environmental groups, as well as notable advocacy from the Union of B.C. Indian Chiefs, have been calling for the removal of ocean-based salmon farms to have the facilities placed on land. Many are concerned that the practice is a factor in the collapse of wild Pacific salmon stocks, as the close proximity of farmed fish act as a breeding ground for sea lice and other pathogens that can pass onto wild species as they migrate by net pens.

But this year a coalition of Indigenous groups are standing behind the industry, warning that removing salmon farms from the B.C. coast would lead to economic devastation for the 17 First Nations who currently have agreements with aquaculture companies.

Along with leaders from the Kitasoo Xai’xais, Tlowitsis and Wei Wai Kum First Nations, Hasheukumiss is defending what salmon farming has done for his community. Since 2006, Cermaq has run its farms in Ahousaht’s waters under a protocol agreement, which entails employment, environmental stewardship, wild salmon enhancement initiatives, benefit sharing arrangements and community projects, which have helped the nation to progress economic initiatives in its territory.

Nineteen Ahousaht members work for Cermaq, but since 2015 the relationship has also brought $325,000 for the Ahousaht Salmon Enhancement Program and $287,500 from the company for the Ahousaht Employment and Training Program. Another $595,000 in support came from Cermaq over the first year of the COVID-19 pandemic, a period that brought lockdowns and curfews as Ahousaht worked to prevent infection from entering its remote community. Habitat restoration work, clean up projects, scholarships, sports and cultural events have also been supported as part of the agreement with Cermaq.

“Right now we’re currently in the process of purchasing an $8-million resort to go to health and wellness, which is going to create not only 50 jobs, but also is going to do great, great work for our nation moving forward,” said Hasheukumiss during an event hosted by the Coalition of First Nations for Finfish Stewardship on March 21. “To protect these rights of our economic self-determination, our members, our nations call on the federal government to immediately reissue salmon farming licences in our territory.”

Years of opposition over salmon farms east of Vancouver Island led to the cancellation of 19 licences in the Discovery Islands, which was announced by former fisheries minister Bernadette Jordan in December 2020. The coalition warns that future closures will harm the social fabric of their communities.

“Leaders in this coalition have seen and experienced the devastation that poverty can have in their communities, with high unemployment, addiction, and suicide,” reads a statement from the coalition issued in March. “Having long-term economic opportunities (like current agreements with salmon farming companies) that the nations manage is the foundation for the renewal of their communities.”

While salmon farming presents employment opportunities that might otherwise be hard to come by in remote coastal communities, many fear that the practice has disrupted wild stocks. After peaking at over 40 million in the early 1990s, Pacific salmon catches have declined to under 10 million for most years over the last decade, according to the DFO’s State of the Salmon Program. Now three quarters of the salmon harvested in B.C. come from fish farms.

“Sea lice is one of the biggest environmental concerns our nation has,” said Hasheukumiss, noting how Cermaq has closely monitored this pathogen in recent years. “This has been a big step forward holding Cermaq accountable.”

Since 2016, Cermaq has funded a wild juvenile salmon monitoring program in Clayoquot Sound, collecting samples of chum and coho from 18 locations near its farms in March, April and May during outmigration periods. Over 800 salmon were analysed each year, with lice detected on anywhere from 20 to 40.8 per cent of fish, the highest counts recorded in 2018 during Clayoquot Sound’s outbreaks that caused emergency measures in some farms. Last year 28 per cent of the salmon sampled had lice, an average of just over two motiles per fish.

Cermaq has dealt with Ahousaht’s concerns by lowering the regulated threshold of three lice per salmon to 1.5 for farms in the First Nation’s territory. This applies to the period of salmon outmigration, running from February to the end of July.

While the industry awaits a decision from the federal government, Hasheukumiss has been struggling to replicate the positive relationship he had with Jordan, as he met with the former minister in person several times. As the feds weigh differing influences vying to change the direction of salmon farming, the Ahousaht leader fears he may be “dealing with another minister that’s really pushing for the activist side, listening to the activists prior to listening to the Indigenous and our concerns moving forward.” 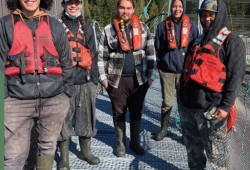 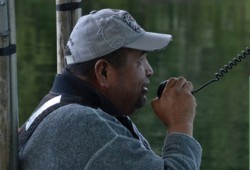