An old growth Douglas fir retained from logging near Port Alberni. The Huu-ay-aht are moving to protect their long-term forest interests, identifying over 4,000 tall trees to be preserved in the First Nation's territory. (Mike Youds photo)

Huu-ay-aht First Nations have a relatively small territory, yet they hold big ambitions in forestry.

Notched out of the Island’s west coast, Huu-ay-aht-owned land spans 8,200 hectares of the Sarita River watershed along Barkley Sound’s south shore while the nations hold additional rights in their larger ḥahuułi, including Tree Farm Licence 44.

This location has more than a little to do with HFN’s strategic interest in the forest industry as it undergoes upheaval and potentially transformative change through the provincial government’s promised forest sector “modernization,” implementation of DRIPA and recommendations of the strategic old growth review.

“Our biggest threat is that people are calling for a halt to all old-growth logging in B.C.,” Huu-ay-aht Chief Councillor Robert Dennis said during a recent UBC forestry panel discussion. He shared a photo of massive logs supporting the House of Huu-ay-aht in Anacla. “To me that means, OK, Huu-ay-aht, we’re not going to allow you to build any more structures like that.”

Less than a year after Huu-ay-aht-owned Huumiis Ventures acquired a 35 per cent stake in TFL 44, the new partnership with Western Forest Products — C̕awak ʔqin (Tsawak-qin) Forestry — is forging ahead with long-range plans to advance to carbon neutrality and fresh analysis of old growth trees in the TFL, research released ahead of an old growth summit hosted by Huu-ay-aht First Nations in Anacla April 28.

Next week’s gathering brings together coastal Indigenous representatives to share information on their stewardship and resource management planning and decision-making processes. Its purpose is to hear from forestry professionals on the so-called “science gap,” wide discrepancies in scientific estimates of old growth forest in B.C., a bone of contention in a continuing conflict over what remains of trees 250 years old and older.

“The need for large-scale deferrals would likely be justified by reliance on the untested assertion in 2020 by technical advisors to B.C. that there is only three per cent of productive old growth left in B.C.,” HFN said as it announced the summit in November. “Other forestry technical advisors say there is 30 per cent of similarly labelled productive old growth left within a highly protected land base. As the rights and title holders who make the final decisions on forestry in our territory, Huu-ay-aht needs to close this science gap.”

Far from shying away from controversy, HFN has elected to take a lead hand on the politically charged issue of old growth preservation and deferrals, heading off any potential constraints on their right to manage their forests as they see fit.

C̕awak ʔqin Forestry released results April 6 of a TFL 44 technical analysis that backs up Huu-ay-aht assertions about remaining old growth. The study found three-quarters of old growth in TFL 44 is protected or outside the timber harvesting land base. While some studies estimate as little as one to three per cent of more productive old growth (valley bottom) forest remains across the province, the study suggests TFL 44 has 29 percent.

The analysis provides a baseline for the Huu-ay-aht integrated resource manage plan (IRMP) expected to take shape over the next two years, said Joel Mortyn, a forester who authored the report.

“From a conservation focus, the data tells us that old forests are less represented in the highest productivity stands and the drier ecosystems in TFL 44, and the current Indigenous-led planning process will be important in addressing those areas,” Mortyn said. “It is also clear that old growth is not at risk of disappearing from TFL 44 and will, in fact, be higher than current levels in the future due to the established network of protected areas.”

The study was peer reviewed by experts in the field of forestry, ecology and timber supply analysis, C̕awak ʔqin said.

“Facts matter, and so do millennia of on-the-ground knowledge passed down through our ancestors,” Dennis said. “This study confirms what we have always known – that there is more old growth than claimed and that even under existing forest stewardship regimes, the amount of old growth will grow over our Indigenous seven-generation planning horizon. It’s time to move past the battle of numbers and continue planning for a future where we continue to have old growth in perpetuity, as well as strong resilient communities where everyone and everything benefits.”

“The report shows the state of our forests after a century of excluding our people from the lands we have lived on and from since time immemorial,” said Huu-ay-aht Hereditary Chief ƛiišin, Derek Peters. “Now the world is turning to our nations to lead the journey to an even better way where, through Indigenous leadership grounded in respect, we ensure a brighter future for everyone and everything.”

C̕awak ʔqin put another feather in its old-growth protection cap last week, announcing that trees within TFL 44 above 70 metres in height will be retained while the IRMP is completed over the next two years. Previously, only trees more than 80 metres high were retained.

Using LiDAR remote-sensing data, the company has identified more than 4,000 tall trees and said it will ensure that forest reserves are left intact around them.

An estimated area of 14,000 hectares of existing and planned preserved forests in TFL 44 is associated with tall trees. By comparison, the provincial government’s technical advisory panel recommended deferral of harvest of 11,860 hectares in TFL 44.

Over the next two years, foresters and ecologists, working with Witwak Guardians employed through a stewardship monitoring program, will verify tall trees and work with TFL 44 nations on long-term retention measures.

“This change in tall tree retention aligns with Huu-ay-aht First Nations practices on its lands and tenures and maintains options for long-term decisions made through the TFL 44 IRMP process,” said Shannon Janzen, forester and chair of C̕awak ʔqin’s board.

Next week’s Anacla summit includes a tour of the Huu-ay-aht ḥahuułi along with discussions about Huu-ay-aht’s approach to old-growth management and the IRMP process. 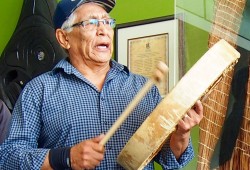 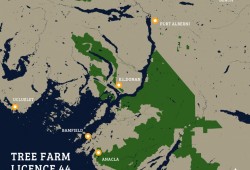