Regenerative ocean farming is taking place in Barkley Sound in the traditional territory of the Huu-ay-aht First Nations to maintain the sustainable creation of ocean products like oysters and clams.

Aquaculture company Nova Harvest has been operating out of Bamfield since 2011, producing oyster and clam seed for local shellfish farmers while applying innovative, science-based solutions to support the development of the shellfish industry in the province.

Nova Harvest operates a hatchery where they breed millions of oyster seed and an ocean-based nursery for the seeds to grow. The company uses regenerative ocean practices by growing the shellfish using no additional fresh water, fertilizer or feed.

Indigenous people in B.C. have been farming renewable ocean crops like shellfish and kelp for thousands of years. When shellfish are farmed in protected coastal areas, they create additional habitat space for species like sea cucumbers, rock fish and juvenile salmon.

“The majority of what we produce is oyster seed for the B.C. oyster industry, we also do some Manila clams,” said hatchery manager Angela Fortune in the BMSC webinar. “We have ocean nurseries, a farm and a processing plant. With that we have three ocean tenures and have recently just started a joint venture/partnership with the investment arm of the Huu-ay-aht Group of Businesses.”

Fortune said oysters and clams are the most sustainable protein on the planet and growing them has a net positive impact on the surrounding environment.

“The biodiversity of an area surrounding a shellfish farm is incredible. All the different animals around it like to settle in and grow, or the filtering of water that helps other species get light or increase water quality,” Fortune said.

Once the oysters are large enough, they leave the main hatchery and move into Nova’s greenhouse nurseries. Then they’ll either be sold to customers, or if they’re staying local to the west coast, they’ll be put into a floating upwelling system.

The floating upwelling system is a structure that floats at the surface of the water and acts as a nursery for the growing oysters. Held in tanks off each of the offshoot arms, oyster larvae are constantly feeding on the naturally occurring algae in the water.

Nova Harvest also farms using a system called flip farms, which is a method of growing oysters in bins at the surface of the water along long lines of rope. Originating from New Zealand, this farming system helps keep water flowing through the bins to keep oysters well fed.

“Anywhere you put a hard substrate, life finds it and starts growing a system around it,” said J.P Hastey, president and founding member of Nova Harvest. “That’s what oysters are, just massive amounts of surface area. They’re removing nutrients from the environment, they also are supplying habitat or substrate for other things to live on, in and around and that’s kind of the ecosystem that gets created by these farms to provide that net benefit to the system.”

Another system Nova Harvest uses for farming oysters is called stack farms which consist of vertical stacks to grow oysters in deep water.

“[Stack farms] are a lot more efficient use of the water column in a specific area. You can get a lot more production out of your farm, being able to farm beyond just the water surface area,” Hastey said. “You have a lot more access to a lot more water, a lot more flow.”

Hastey said his team is working with business partners, like the Huu-ay-aht, to develop a new technology to automate many of the components of farming.

“That’s something we think is really important for developing the industry and growing more product,” Hastey said. “Our goal or vision is to have a scaleable farming model so we can grow really meaningful supplies of shellfish, so that means limiting handling at every step that we can. Workers aren’t doing jobs that machines should be doing, they’re focusing more on operator-type positions of the machines and that way we could handle more product and push more to the consumer.”

Hastey said the more oyster farming Nova Harvest does in Barkley Sound, the better the environment will be around the system.

“Regenerative farming is kind of a new term you’re hearing to describe this but it has been going on since the beginning of shellfish farming, which is something the First Nations did thousands of years ago,” he said. “[Oysters] are one of few things you can grow that have a net benefit on the system…and that’s what’s really amazing about it.”

Nova Harvest is also an anchor tenant at the regional food processing hub, The Dock +, next to Tyee Landing in Port Alberni. 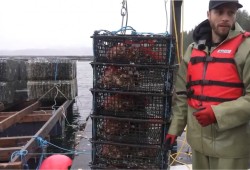