On April 21 Murray Rankin, minister of Indigenous Relations and Reconciliation, announced a one-time $74 million grant for First Nations to make up for lost gaming revenue during the first year of the COVID-19 pandemic. (Province of B.C. photo)

Three years ago First Nations across British Columbia celebrated the first payment of their newly designated share of the province’s gaming revenue. But as COVID-19 closed casinos the following year gambling proceeds dried up, forcing many Indigenous governments to put their community projects on hold.

To make up for lost revenue, today a one-time $74 million grant was announced by the province, to be distributed to the nearly 200 First Nations currently participating in the agreement. This amount is being dispersed to make up for the revenue shortfall over the first year of the COVID-19 pandemic.

“The intent of sharing gaming revenues was to ensure that communities have a long-term, stable source of funds to further discretionary community priorities,” said Kathryn Teneese, co-chair of the B.C. First Nations Gaming Commission. “Not more than one year into the revenue-sharing agreement, the COVID-19 pandemic hit and casinos were closed, resulting in a 75 per cent reduction in gaming revenue.”

“Like all governments, we recognise that First Nations governments need the same kind of stable, predictable funding to fund their priorities,” said Murray Rankin, minister of Indigenous Relations and Reconciliation. “The purpose of this grant is to ensure that First Nations are not further impacted by the falling gaming revenue caused by COVID-19. It’s about making sure that those who are among the most hardest hit in our province by the pandemic are not left behind during the recovery from the pandemic.”

Enacted in 2019 to run for 25 years, the B.C. First Nations Gaming Revenue Limited Partnership provides seven per cent of proceeds to local Indigenous governments, which comes from legal gambling activities such as casinos, lottery tickets and government-authorized sports betting. When it was announced, the partnership was expected to bring from $250,000 to $2 million in annual revenue for each First Nation, depending on its population and remoteness.

The Ministry of Indigenous Relations and Reconciliation noted that, in many cases, First Nations were hit particularly hard by the pandemic and the resulting impacts of its associated restrictions and societal effects. Damage from summertime forest fires and floods during torrential rains in late 2021 added to the challenges.

“In many cases, funding intended for initiatives such as home construction, language revitalization and community improvements has been used to meet immediate daily needs instead,” stated the ministry in a press release.

The Tseshaht First Nations is cited as an example, which had to scale back or cease several community priorities during the pandemic. These include governance and policy development, the exploration of a tiny home initiative to help with a housing shortage, a Tseshaht history book, development of a multiplex building for community wellness, providing retail space for members as well as language preservation programming.

“The funding provided through this grant will see those projects go ahead,” stated the ministry.

“Today, we’ve been providing services to our community in health and wellness activities at a time when they needed it the most,” said Tseshaht Chief Councillor Ken Watts. “Presently, although we’ve felt the deep impacts of the pandemic on the revenue sharing, this announcement will assist our nation in many ways, in particular in providing certainty for our language department.”

“Building a new community centre has been a dream of many of our members, which this gaming revenue sharing will assist in,” he added.

With many COVID-19 restrictions lifted and casinos open again, revenue for the First Nations to share is expected to rebound to approximately $100 million annually, said Jay Johnson, lead coordinator and chief negotiator of the B.C. First Nations Gaming Commission.

“What we’ve seen so far is that gaming revenue has rebounded significantly and we’re looking at similar revenues that were occurring prior to the pandemic,” he said.

All but five of the 203 First Nations in B.C. have joined the revenue-sharing agreement.

“There are a couple that have yet to make a decision whether they want to sign up,” noted Johnson. “The revenue that would be designated for those communities is put into trust from being won. So that When and if they make a decision to participate they would receive the full amount of those revenues for the initial three-year period. After the three-year period, if they’re still not signed on, those revenues would be distributed back.”

Half of the funds are equally divided among the participating First Nations, with 40 per cent dispersed on a per-capita basis. The remaining 10 per cent is set aside for remote communities. 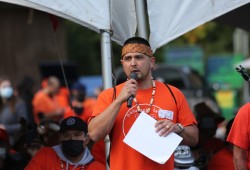