Nuu-chah-nulth fishers are working with experienced harvesters, after DFO set crab reallocations in December without consulting the commercial in Tofino. Pictured is Tla-o-qui-aht member Elmer Frank operating a crab boat off or Tofino. (Lacey Adams photo)

One year after a favourable court ruling, changes are underway to give Nuu-chah-nulth fishers a role in the crab fishery near Tofino - but help from existing commercial operators has been necessary for the transition into an expensive and potentially dangerous industry.

In late November the five nations of Ahousaht, Hesquiaht, Ehattesaht/Chinehkint, Mowachaht/Muchalaht and Tla-o-qui-aht received a surprising piece of news from Fisheries and Oceans Canada. The nations’ stake in the Area E crab fishery off of Tofino was to be increased to half of trap allocations near the shore, with 25 per cent of traps offshore. This represents a transformational change in the nations’ commercial access to the shellfish in the area; before this re-allocation licences had been limited to one held by the Nuu-chah-nulth Seafood Development Corporation and two owned by Ahousaht, with just one of them being used in the First Nation’s territory.

The re-allocation was guided by a decision released by the B.C. Court of Appeal in April 2021, which found that Canada’s management of commercial fisheries had unjustifiably infringed on the Nuu-chah-nulth nations’ right to harvest commercially in Area E. This ruling was the end of a multi-trial legal battle that was launched in 2003.

“It’s an opportunity,” said Wickaninnish, Cliff Atleo, Ahousaht’s lead negotiator, of the re-allocation of crab licences. “One of the things I’m always grateful for is how the decision included all aquatic species.”

Atleo expects that crab fishing will provide a supplementary income for Nuu-chah-nulth-aht who enter the industry.

“I think it’s going to be a side thing originally, because we’re coming into it when gas prices have never been higher,” he said. “Just to make a living I think you’ve got to have way more traps than we’re being allocated.”

Not everyone is happy with these changes, as the re-allocation is affecting the 30-some boats that currently fish for crab in the area.

Jason Voong is president of the B.C. Crab Fishers’ Association. On Dec. 23 he was informed by DFO that his group would be losing allocations in the commercial industry, a decision that was made without any input from crab fishers.

“I don’t understand why DFO didn’t come to the association, or at least form a better plan on how to best implement the five nations’ right to fish alongside us,” said Voong, who has been busy working the traps he still has since fishing began on April 1.

“It’s been a lot more difficult to fish efficiently because I can only cover so much ground with the traps that I’m allowed to fish,” he added. “Starting in April I’ve just been breaking even.”

The current limitations are part of a decline in the industry Voong has seen since his father moved from Vietnam to fish a generation ago.

As opportunities shrink for the commercial boats, DFO has offered to buy licences, with an approaching deadline of May 13 for this voluntary retirement. Although Voong is seeing many of his peers leave the business, he doesn’t believe a fair market value is being offered for the licences.

“The issue is DFO doesn’t use up-to-date market research,” he said. “They’re using data from 2020 and so much has changed in the last two years. Fuel has gone up, bait has gone up. All of these things need to be considered when the government buys back a licence.”

Voong said the current rate offered by DFO for a crab licence is approximately $32,000 a foot, meaning the typical 20-foot crabbing boat used for inshore waters would bring around $640,000. But he has seen licences change hands for much more recently.

“A couple of months ago there were two boats here that sold for at least $50,000 a foot,” said Voong.

Although the crab licence reallocation has brought opportunity for the five nations to explore in their territorial waters, they too are frustrated with the federal department’s reluctance to engage with those reliant on the resource.

“More consultation in advance of the announcement would have allowed all harvesters to better prepare for the transition to a fishery in which the nations have their rightful place, and the industry could have made informed choices well in advance of their fishing seasons,” reads a statement from the five nations on April 13.

The Nuu-chah-nulth nations stressed their commitment to working with commercial crab fishers to “jointly advise DFO on issues and areas of concern” near Tofino. This year the licence changes have been gradually phased in, with approximately 30 per cent of traps going to the Nuu-chah-nulth boats, with half of Area E’s allocations expected to go to the five nations in 2023.

“This year it hasn’t been cut in half just yet,” said Voong. “The five nations agreed to phase in trap reallocation instead of taking 50 per cent away from us right off the bat. They were nice enough to help us out and only took away 30 per cent for this year because they don’t have the infrastructure set up yet for their fishery.”

Fishing offshore is particularly demanding, as the Pacific’s waters require larger boats that the Nuu-chah-nulth nations don’t yet have access to.

“The weather out there is pretty rough,” said Voong, noting that currently only 10-15 boats are equipped for these waters. “For us fishermen here, we only get about 30-40 days to work offshore because the weather is just not nice.”

Atleo said that the Nuu-chah-nulth nations plan to be able to fish for offshore crab in the future. As the area transitions to give Nuu-chah-nulth a place in the crab industry, the nations’ fishers are being mentored by the experienced commercial harvesters. This shows a “commitment to reconciliation” after DFO policies pushed the Nuu-chah-nulth out of the industry years ago, stated the five nations.

“We wanted to sit down and talk with them about the management of crab,” said Atleo. “Like everything else it’s been poorly managed, by that I mean we now have crab traps outside [offshore], they never used to be outside. The reason they’re outside is crab fishers from the Fraser River got shifted into our area, because their fishery has been poorly managed.” 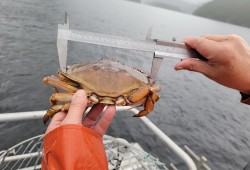 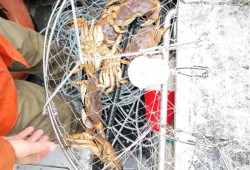 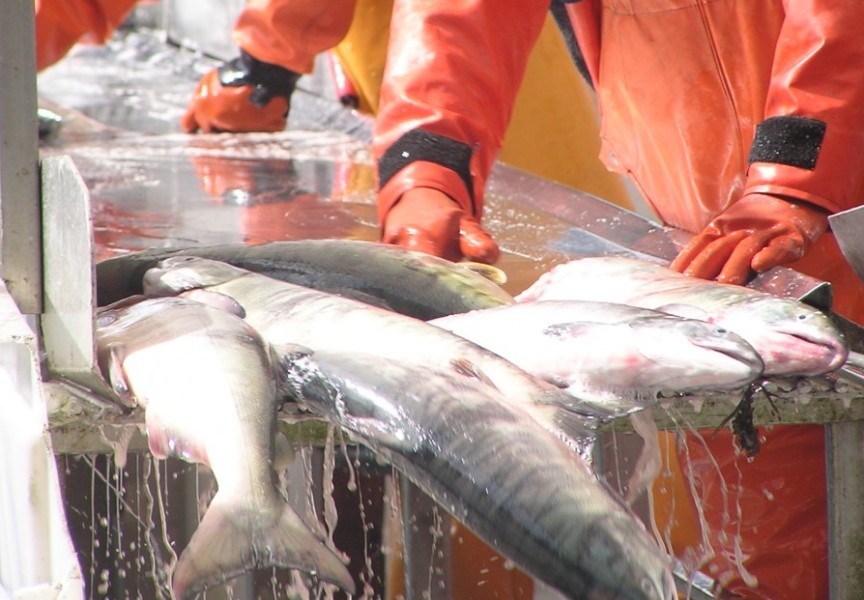