Constable Yannick Harry (left) and Sgt. Steve Mancini take a knee beside elder Richard Mundy in a display of solidarity during a peaceful protest in Ucluelet, on Sunday, June 6, 2020. The event was held in honour of Chantel Moore, a Tla-o-qui-aht woman who was fatally shot by a police officer in New Brunswick earlier that year, and George Floyd, who was chocked to death by an officer in Minneapolis, Minnesota in May 2020. The public service is being increasingly scrutinized, leading to recommendations for the province to reform its Police Act. (Melissa Renwick photo)

The Special Committee on Reforming the Police Act released a report with 11 recommendations to transform law enforcement and community safety on April 28.

Over the past 15 months, the committee gathered input from 411 organizations and individuals who presented and wrote to the group during a public consultation period.

Meanwhile, more than 1,400 British Columbians provided input about their experiences and perspectives on policing through a survey.

The committee was appointed by the Legislative Assembly of British Columbia amidst “increasingly widespread awareness of systemic racism in policing, demand for improved police accountability, and questions about the appropriateness of police responses to mental health, addictions, and other complex social issues,” according to the report.

Nuu-chah-nulth Tribal Council (NTC) President Judith Sayers and NTC Vice-Present Mariah Charleson were among those given 15 minutes to present their recommendations to the committee.

Sayers said the short time allotment did not accommodate the “scale" of the issues being discussed.

“We tried to make as many recommendations [as we could],” said Sayers. “And to let the [committee] know how much our communities have been impacted.”

Sayers said 53 Nuu-chah-nulth women have been murdered or died under suspicious circumstances, and two remain missing.

“It would have been nice to have been a greater part of the committee and their recommendations,” she said. “It would feel more like [it was] Indigenous-led.”

Over the course of the committee’s consultation, the report said it became clear that the Police Act is “not meeting the needs of British Columbians, and that transformative change is required.”

"British Columbians highlighted significant challenges in the structure and delivery of police services, which have contributed to a lack of trust in these services,” Committee Chair Doug Routley said in a release. “The committee's report outlines a new vision of policing and community safety rooted in decolonization, anti-racism, community and accountability.”

The committee’s first recommendation was to implement a new Community Safety and Policing Act, which includes “ensuring Indigenous peoples and nations, and municipal governments, are engaged in the drafting of the legislation.”

“As I see it, we're allowed to look at the legislation – we sign non-disclosure agreements – we make comments on it, but we don't have final approval,” said Sayers. “I’d like to see [Indigenous peoples] have better involvement in that legislative process.”

Meanwhile, the BC First Nations Justice Council (BCFNJC), the First Nations Summit, the BC Assembly of First Nations and the Union of British Columbia Indian Chiefs “applauded” the work of the committee in a news release.

“It is promising to see the special committee recognize that police must play a central role in supporting diversion of Indigenous people from the criminal justice system,” the release read.

BCFNJC Chair Doug White said that B.C. needs to adopt its own police force, similar to Ontario and Quebec.

“When policing began, the RCMP was created to control Indigenous people and that story line has never changed,” he said. “When the province contracts with the RCMP to operate as B.C.’s provincial police force, they are delegating too much authority and control away.”

The report’s recommendations, which outline a “less harmful and more appropriate and respectful approach to policing for our people,” are in alignment with the BC First Nations Justice Strategy, White added.

Conversely, Sayers said she’s “not convinced that replacing the RCMP with a B.C. police force is the answer.”

“It’s not enough,” she said. “We’re asking for trauma-informed teams to be going in and replacing some of the RCMP roles – policing roles.”

In response to the report, Minister of Public Safety and Solicitor General Mike Farnworth said the recommendations “echo our government's belief that everyone deserves equal treatment by the police.”

"This has not always been the case for many Indigenous, Black and other people of colour,” he said in a release. “Public trust requires that the delivery of police services is fair, equitable and responsive to all British Columbians.”

Farnworth said the ministry will be discussing the recommendations with Indigenous partners, community advocacy organizations, health groups, and police oversight bodies to meet the new vision for the Police Act beginning in late-summer.

"Policing is the subject of attention across Canada, and there are numerous national conversations occurring about policing reform,” he said. “We are dedicated to creating a safer, more inclusive B.C., and the report and its recommendations will help us achieve our goal of eliminating inequity and advancing enduring reconciliation.”

Sayers said the report includes “some great ideas” around decolonization, anti-racism and accountability.

But, she said, the “actual implementation” of those ideas is often “glossed over.”

While the report might have the “greatest of intentions,” Sayers said “I'm not convinced that the B.C. government has got it down pat yet on how to work with Indigenous people." 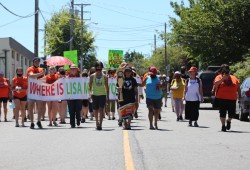