With Dontay Lucas’ father sitting next to them, Port Albenri RCMP announced they “turned every stone” while investigating the death of the six-year-old.

The young boy died under suspicious circumstances on March 13, 2018, shortly after he was found in medical distress at a Port Alberni home. Four years later, police announced the arrest of two people with charges of first-degree murder.

“Due to the tireless efforts of investigators, on Friday May 6 the Port Alberni RCMP arrested Dontay’s mother Rykel Frank nee Charleson and her now husband Mitchell Frank and charges were approved for the first-degree murder of Dontay Lucas,” said Const. Richard Johns of the Port Alberni RCMP.

Police stated that the four-year delay in making arrests in the death of Dontay Patrick Lucas, a Hesquiaht boy, was due the care that was taken to prepare and present all evidence to Crown counsel.

“In order to ensure that officers were ready to have this matter before the courts immediately, painstaking efforts were made to ensure every piece of evidence has been disclosed to the BC Prosecution Service and that the investigation is ready to stand trial,” said Johns, the detachment’s media relations officer.

At the media event on Monday, May 9, Dontay’s father, Patrick Lucas, sat stoically beside Sergeant Clayton Weibe of Port Alberni General Investigative Services as his grandmother and aunt sat nearby, softly sobbing.

Wiebe described the investigation as complex, noting there was a lot of evidence to process.

“The volume of material was enormous, and it takes time to put it together,” Weibe stated.

He went on to say that they waited for reports from various agencies including the BC Coroner and forensic sciences services. He mentioned cell phone records were part of the investigation. The RCMP waited for Crown counsel to approved charges before arresting the couple. Those charges were approved in the past couple of weeks, according to Wiebe.

When asked what the cause of death was, Wiebe said that information couldn’t be released and would come out in the trial.  He declined to say why the charges were first degree murder.

“In order to explain that properly, I would have to get into the evidence, which I’m not prepared to do right now,” he said.

Other children who were in the home at the time of Dontay’s death were immediately removed and placed in care, according to Wiebe.

The couple are in custody and will appear before a judge for a bail hearing. According to Wiebe, this is scheduled for Port Alberni Law Courts on Wednesday, May 11.

According to the Criminal Code of Canada, murder is first degree if the offence was “planned and deliberate.” A person’s death can also fall under this classification if the murder occurs while someone is attempting sexual assault or kidnapping and forcible confinement. 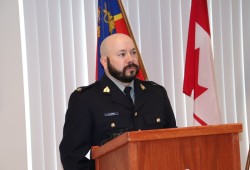