Chantel Moore was fatally shot by an Edmundston police officer during a wellness check during the early hours of June 4, 2020.

After two delays, the New Brunswick coroner’s inquest into the police shooting death of Tla-o-qui-aht’s Chantel Moore began Monday May 16 near Edmundston, where the 26-year-old lost her life in June 2020.

Chief Coroner Jérôme Ouellette first announced on July 7, 2021 that an inquest into the death of Moore had been scheduled to begin Dec. 6, 2021 in the Edmundston region. That was delayed until early 2022 and then again to May 16, 2022.

Moore died on June 4, 2020, on the deck outside her residence following a wellness check by Edmundston Police officer Jeremy Sun, who shot her five times after alleging she approached him brandishing a knife. Sun was cleared of wrong-doing in a subsequent police watch-dog investigation conducted by Quebec’s BEI (Bureau des enquêtes indépendantes).

According to the New Brunswick Coroner’s website, the inquest, the presiding coroner and a jury will publicly hear evidence from witnesses to determine the facts surrounding this death. The jury will have the opportunity to make recommendations aimed at preventing deaths under similar circumstances in the future.

Martha Martin, mother of Chantel Moore, took the stand on Monday, describing what happened the two times Edmundston Police officers came to her door in the early morning hours of June 4, 2020.

An inquest is a formal court proceeding that allows for the public presentation of all evidence relating to a death. The Coroner Service is an independent fact-finding agency that does not make any determination of legal responsibility nor does it assign blame.

Martha Martin will be supported by her mother Grace Frank, who flew in from British Columbia along with Martha’s brother to attend the inquest.

The inquest is expected to take one week. 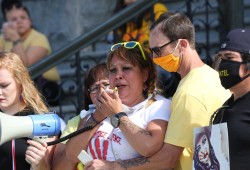