The Coastal Restoration Society scans the Alberni Inlet for abandoned ghost gear and garbage in February. The society is currently accepting applications for 12 individuals to receive paid training which would lead to employment. (Karly Blats photo)

The Coastal Restoration Society (CRS) is looking to train and hire at least 12 individuals for coastal remediation activities in Barkley Sound and Clayoquot Sound.

The CRS Coastal Restoration society is an organization that supports resource management and environmental stewardship goals of First Nations, as well as provincial and federal governments. Their services include marine-industrial project development and implementation, scientific monitoring and assessment, aquatic invasive species management and control, and climate change mitigation in the marine environment.

The upcoming training to be a part of the CRS is free and successful applicants will be paid as an employee of the society during the entirety of the training, which will occur in Port Alberni at North Island College. Upon completion of the training, full-time employment with CRS will commence immediately. Training starts June 6, running until June 25 and applications are due May 23.

“We’ve partnered with North Island College here in Port Alberni to offer all the training that you need to become a technician to work on our restoration projects that we’re focusing on on the west coast of Vancouver Island this year,” said Joshua Charleson, senior project manager with CRS. “The successful applicants will be hired as employees, so they will actually be getting paid to do the training, and then once the training is finished they will be enrolled in full-time employment on our projects on the west coast.”

“The ghost gear is abandoned, lost or otherwise discarded fishing gear and then we also work with controlling invasive species, so we do the monitoring and trapping of invasion European green crabs,” Charleson said. “In Port Alberni we’re working on putting in an application for shoreline cleanups in Barkley Sound and then we’ve done ghost gear surveys in the canal in February, so we’re hoping that will continue after the training.”

Charleson said preliminary surveys the CRS has conducted for ocean garbage have been shocking. He said everywhere they’ve looked, they’ve found the presence of abandoned ghost gear and copious amounts of garbage.

“Everything from huge lengths of rope, cable, batteries, bicycles, shopping carts…there’s just an incredible amount of debris on the bottom of the ocean and our main focus is to target all of that and deal with it appropriately,” he said.

Charleson said with all the garbage in the ocean, training and hiring 12 new individuals will help streamline coastal remediation projects.

Anyone who is interested in joining the CRS, is encouraged to apply to Charleson by email at jcharleson@coastrestore.com.

“Our entire society has a First Nations first policy. So I shared [the training opportunity] with as many of the First Nations on the coast as I could, all throughout Nuu-chah-nulth,” Charleson said. “Our focus is to bring these employment and capacity opportunities to First Nations.”

Charleson added they are also looking to hire an experienced excavator operator who can also email him to apply.

The CRS’s efforts to clean up the coast align with Courtenay-Alberni MP Gord Johns’ parliamentary motion for a national ocean plastics strategy that passed unanimously in the House of Commons three and a half years ago.

Although Johns said progress on the strategy has been slow, it would include funding for ocean and shoreline cleanup efforts and regulations around consumer and industrial use of single use plastics to try and keep them out of the ocean and off beaches. 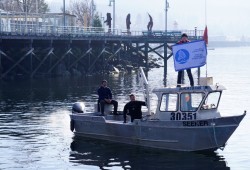