Premier John Horgan announces the construction of a new Royal B.C. Museum over the next seven years at a press conference in Victoria May 13. (Province of B.C. photo)

Watts told Ha-Shilth-Sa that there are Tseshaht artefacts in the RBCM collections and the Tseshaht were not consulted about the rebuild or whether or not they will repatriate their belongings.

“There are 204 First Nations in B.C.….How about you give each of them/us $1 million to repatriate THEIR artifacts and each build their own small museum, contribute to larger BC indigenous museum, or for Tseshaht maybe a Nuu-chah-nulth wide museum $14 million (14 nations),” posted Watts on social media, referencing the 14 First Nations in the Nuu-chah-nulth Tribal Council. “That would only be $204 million out of your $789 million!”

In a May 13 press release, the provincial government said it would build a new state-of-the-art and seismically safe Royal B.C. Museum in Victoria.

“The new museum is made possible through a $789-million investment from the province,” stated the release.

“The new museum will also be one of the first government projects of this size that partners with local First Nations on the project team, participating in both project development and delivery, including design influence to reflect the Lekwungen peoples, and members of the Songhees Nation and Esquimalt Nation,” said Melanie Mark, minister of Tourism, Arts, Culture and Sport.

In three building assessments dating back to 2006, it was discovered that there is a need for major seismic and structural improvements at the RBC Museum, putting at risk the museums’ extensive collection of artefacts.

The RBCM was founded in 1886 and spent its first few years in smaller facilities in downtown Victoria. In 1941 six building lots at the corner of Belleville and Douglas Streets were transformed into Thunderbird Park, where totem poles were put on display. They were eventually moved indoors to preserve them and were replaced with replica poles.

In 1963, then premier W.A.C. Bennett announced plans to build a new museum as part of a centennial project. A few years later Queen Elizabeth and the Queen Mother dedicated the RBCM cornerstone. By 1969, the new museum was complete.

Nearly 60 years later it was determined that it would cost more to renovate rather than rebuild.

The new museum, to be built on the same site, promises to be more accessible and more inclusive of the various cultures that make up the province. In addition, it will be energy-efficient and seismically safe.

But the backlash to the news was immediate with opposition leaders balking at the hefty price tag of the new museum. BC Liberal leader Kevin Falcon promised to scrap the plan if elected, calling it a vanity project in the NDP Premier John Horgan’s backyard.

In response, the province released its business case on May 25, outlining the rationale for its decision to build a new museum. They said that the business case was developed to enable the RBCM to meet its legislated mandate to protect B.C.'s natural and human history for British Columbians today and in the future.

The business case arose from a five-year evaluation project which confirmed the museum is at the end of its useful life, with costs to upgrade existing buildings more than those to replace them with a new, modern facility.

Watts says Tseshaht was not consulted about the plan to build a new museum, noting that some of what they have in their collection belongs to Tseshaht.

“I’m not okay with that,” said Watts.

He said that he will be writing an open letter to the provincial government citing Tseshaht concerns about the lack of consultation. He knows of at least two Nuu-chah-nulth nations that have repatriated some items from RBCM. But he also knows that a museum facility has specific temperature and humidity requirements to conserve delicate artefacts.

“It costs a lot to repatriate, conserve and exhibit artefacts,” he noted.

Watts says he wants to look at solutions.

“Maybe we should be scaling back (the provincial museum), we should at least have these conversations but it’s not even on the table,” he said.

In order to make way for new construction the museum will close its doors on Sept. 6.

Over the seven years that it will be closed, the Royal BC Museum will deliver provincewide travelling exhibitions, regional satellite displays and an interactive walking tour in Victoria.

“Unique events, community programs and learning experiences will be offered throughout the province, along with innovative virtual programs and digital tools available to all,” states the RBCM on their website.

BC Archives services will remain open at the downtown site until it moves to its new permanent home at the collections and research building in 2025. Imax Victoria, the museum’s gift shop and the food trucks located at the museum will stay open through early 2023.

The new modernized provincial museum is expected to open in 2030. 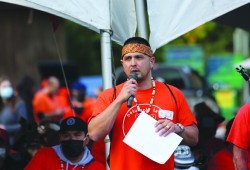