Ditidaht First Nation members are the proud owners of a new, 28-foot, custom-built landing craft that will be used to monitor and study the hahulthi around Nitinaht Lake.

Funded through the Trans Mountain Expansion (TMX)’s Indigenous Advisory and Monitoring Committee (IAMC) fund, the boat, worth $415,000, was delivered to the shores of Nitinaht lake on June 1, as proud community members applauded.

Built by Walker Custom Aluminum Boats in Coombs, BC, the shiny new vessel was trailered across the island on June 1 to a small bay on Nitinaht Lake, where the community welcomed it with a brushing ceremony before it was launched.

Paul Seiber, Ditidaht’s natural resource manager, said the custom-made landing craft was funded by a grant through Trans Mountain pipeline expansion. Currently under construction, the project is designed to nearly triple the capacity of petroleum piped from north of Edmonton, across the Rocky Mountains to the Vancouver area.

Trans Mountain has signed 43 Mutual Benefit Agreements with Aboriginal groups in B.C. and Alberta, 33 of which are in British Columbia. According to IAMC-TMX, the Mutual Benefit Agreements that have been signed will see Trans Mountain share more than $400 million with those communities. As one of the 43 First Nations to sign an agreement with the Trans Mountain expansion, this gives the Ditidaht access to funding that could support infrastructure and projects in the community.

Now owned by the federal government, the TMX project has been working to gain support from First Nations communities whose reserve lands could be impacted by the pipeline and tanker project. Concerns about the impact potential oil spills could have on the environment were raised by First Nations.

Mike Wright is a fisheries consultant and has been working on Vancouver Island for more than 40 years. He helped Ditidaht staff apply for funds through the Trans Mountain Accommodation Measures, Salish Sea Initiative. Nitinaht Lake, he said, is really a fiord and very little is known about it in a biological sense.

As signatories to the government’s Trans Mountain initiative, habitat mapping and emergency response is critical for First Nations.

“Members (of IAMC-TMX) have a shared goal of safety and protection of environmental and Indigenous interests in the lands and water,” says the IAMC-TMX website. “Participation by an Indigenous community does not mean that it supports or opposes the project, nor does it change the government's duty to consult.”

The IAMC-TMX initiative brings funding and resources to the communities to carry out work that will help them effectively respond to any potential oil spills and to conduct surveys of their resources.

Seiber said oil tankers will be traveling to and from Vancouver, and must pass through the Strait of Juan de Fuca, then toward Swiftsure Bank, passing close to Nitinaht Narrows, the waterway between the Pacific Ocean and Nitinaht Lake.

DFN, as a signatory to the TMX will receive funding to conduct natural resources studies and to purchase equipment to respond to oil spills.

Wright noted that without a baseline of information they cannot know what would be lost in the event of an oil spill encroaching through Nitinaht Narrows.

“It’s hard to know what you’ve lost if you don’t know what’s there,” he said.

For that reason, the new boat will be used to map the resources in both the lake and in marine and freshwater rivers. Some of the work will be done in collaboration with Parks Canada.

“We can use this boat to move crews around,” said Wright.

The landing gear on the boat will allow the crew to load an ATV, which can be brought to work on the other side of the lake where there is no road access. In addition, the unique design of the boat will allow divers to work more efficiently, with its drop gate.

Plans are in the works to purchase drones and a submarine remote operated vehicle to assist researchers in their work. A new portable office building has been bought for the DFN Natural Resources staff. It was purchased through the same fund.

Members from Ditidaht stood silently as Cyril Edgar chanted, asking the Creator that all that use the boat will be safe and that the boat has good fortune. A small fire crackled nearby as three men and one woman brushed the boat.

Elected Chief Brian Tate thanked the people for coming to the event, noting that it’s been a while that the nation has had something new to celebrate. He also thanked Mike Wright and Paul Seiber for starting the application process that brought the new boat to the community.

“They will use the boat to do research that will benefit all of Ditidaht,” said Tate.

“Good stewardship and monitoring, it’s good to get it going and we hope to keep it going into perpetuity,” said Wright. 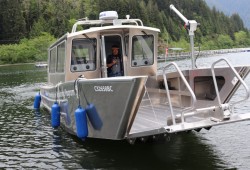