Tla-o-qui-aht First Nation elder Barney Williams welcomes the crowd gathered at the Combers Beach trailhead in the Pacific Rim National Park Reserve to use the new multi-use pathway that connects Tofino and Ucluelet, on June 28. Completed for $51 million, the trail extends 25 kilometres next to Long Beach. (Melissa Renwick photos)

After much anticipation, Tla-o-qui-aht First Nation, the Yuułuʔiłʔatḥ Government and Parks Canada joined together in welcoming visitors to use the new multi-use pathway at the Combers Beach trailhead in the Pacific Rim National Parks Reserve on June 28.

The path, which extends around 25-kilometres, traverses through the traditional territories of Tla-o-qui-aht First Nation and Yuułuʔiłʔatḥ, on the west coast of Vancouver Island.

It is the result of nearly $51 million in federal funding and offers visitors and locals an opportunity to explore the region's lush rainforests by bike or foot.

From the onset of the project in 2016, Tla-o-qui-aht Elected Chief Elmer Frank said the nation made it “abundantly clear” they needed to be involved to ensure the continued protection of their Ha-Houlthee (traditional territory).

An Elders’ Working Group was subsequently formed with representatives from both nations. They have been meeting at least once a month for the past five years and are responsible for naming the path ʔapsčiik t̓ašii, which means “going the right direction on the path.”

Tla-o-qui-aht elder Barney Williams addressed the crowd gathered at the Combers Beach trailhead to celebrate the official opening of ʔapsčiik t̓ašii (pronounced ups-cheek ta-shee). As a member of the Elders’ Working Group, Williams said the nations worked together to make sure the place names were done correctly and respect was shown to the land, plants and trees.

“Today's about celebrating an accomplishment that came to be because two nations were able to sit together [and] work out differences,” he said.

The Elders’ Working Group helped guide Parks Canada through the project using the Nuu-chah-nulth principles of hishukish ts’awalk (everything is one), uu-a-thluk (taking care of), and iisaak (respect).

Together, they developed Nuu-chah-nulth cultural interpretation along the pathway. Trilingual signage and text panels feature place names along the route, where English and French follow Nuu-chah-nulth.

Williams described it as “a first.”

Despite not being an elder, Gisele Martin was invited to join the Elders’ Working Group as a huhuḥtak̓iik (knowledge keeper).

Because Canada’s residential school system tried eradicate Indigenous language, the members of the Elders’ Working Group represent some of the last fluent Nuu-chah-nulth speakers within Tla-o-qui-aht and Yuułuʔiłʔatḥ, she said.

“Our cultures have been so abused and suppressed,” Martin said. “Any opportunity to support knowledge transfer is really important.”

ʔapsčiik doesn’t just mean going the right way, she said. It also means to do the right thing and speak truthfully.

When people talk about reconciliation, that’s what they should be aiming for, she said.

“It’s the wrongs that we need to right,” Martin said.

John Aldag, Member of Parliament for Cloverdale-Langley City, attended the event on behalf of the federal government.

“The close collaboration with the Tla-o-qui-aht First Nation and Yuułuʔiłʔatḥ is part of our government’s ongoing efforts towards reconciliation,” he said in a release. “This significant federal investment will support local economies and growth in the tourism sector, as the pathway offers a wonderful opportunity to share the beauty, history, and culture of Pacific Rim National Park Reserve for decades to come.”

The opening of the path exhibits Tla-o-qui-aht’s willingness to move forward, to build relationships and to heal collectively, said Frank.

“We are hopeful that this collaborative project will provide economic, educational, and recreational opportunities for all the parties involved,” Frank said in a release. “It is our hope that this beautiful trail will symbolize the benefits and achievements that were made by working collaboratively together to achieve common goals.”

While Martin said a lot of work went into the project, more needs to be done to better represent Tla-o-qui-aht and Yuułuʔiłʔatḥ within the region.

And yet, she said, the path offers Nuu-chah-nulth representation to visitors who may be experiencing it for the first time.

“This has to be some of the first representation that you’ll see of our nations,” she said. “There’s been a lot of effort behind this project.” 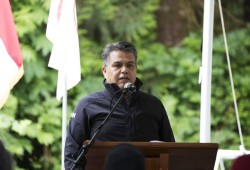 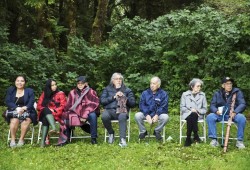