Ka:'yu:'k't'h'/Che:k'tles7et'h' is tapping into a growing appetite for vacations with an Indigenous theme through recent developments, including the reopening of Walter's Cove Resort and buying West Coast Expeditions. (Eric Plummer photos)

After a two-year shutdown that included an uncertain period for the future of the destination, the Ka:'yu:'k't'h'/Che:k'tles7et'h' First Nation’s resort has rebounded this summer to reclaim its place in a growing tourism industry.

Walter’s Cove Resort welcomed its first round of customers on June 23 with a newly leased floating facility anchored in Kyuquot Sound, one kilometre from the First Nation’s village of Houpsitas. The reopening came with considerable excitement from Ka:'yu:'k't'h'/Che:k'tles7et'h' members and staff, who haven’t brought guests to its fishing lodge since before the COVID-19 pandemic.

With 17 staff on hand, 10 of whom are Ka:'yu:'k't'h'/Che:k'tles7et'h' members, the lodge is scheduled to operate until early  September. The resort’s general manager Terry Schultz has seen a “pent up demand” for the destination over the past two years, as many of Walter’s Cove’s previous clients waited for when it would reopen.

“We’re over 90 per cent occupancy right now for the season,” said Schultz two days before the first customers were scheduled to arrive. “We surpassed our guest number target last week, and we surpassed our revenue target about three weeks ago.”

But until recently the resort’s future was uncertain, as structural problems were discovered with the previous facility on Walter’s Island. These issues became apparent in the fall of 2020, leading the First Nation to face $1.5 million in repairs to bring facility’s foundation up to safe standards, said Ka:'yu:'k't'h'/Che:k'tles7et Chief Administrative Officer Cynthia Blackstone.

“It was quite an emotional time for us when we had to close down that resort,” she said. “It was agonizing, really, because it’s such a beautiful building. People who have gone in the building have often expressed how amazing it is and enjoyed their experience while at the lodge.”

After the available options proved to be unviable, by August 2021 customers who had left their deposits with the resort in hopes of a reopening had to be notified.

“We decided to close for the foreseeable future,” said Schultz of the old Water’s Cove facility. “We decided that it wasn’t worth the money to bring that up to commercial code, just due to the size of the lodge, the number of rooms we had. It would have taken them forever to get that investment back out of it.”

What made this decision particularly difficult for the First Nation was the resort’s rapid growth over its previous five years of operation. Since Ka:'yu:'k't'h'/Che:k'tles7et'h' bought Walter’s Cove in 2014, annual revenue rose from approximately $150,000 to almost $850,000. But as many of its guests came for afar, flown in from Vancouver via seaplane, when COVID-19 took hold in 2020 the choice was clear.

“About half of our guests are American. Of course, they couldn’t cross the border - the majority of our guests fly in,” explained Schultz. “With losing 50 per cent of our guests, it just didn’t make sense for us to open.”

As the pandemic dragged on, the discovery of the old facility’s structural issues forced Ka:'yu:'k't'h'/Che:k'tles7et'h' to come to terms with what was needed if it was to explore a future in the fishing lodge industry: a larger resort than the pre-existing nine rooms.

With no season on the horizon, opportunity was presented with the Englefield, a premier, 23-room floating facility equipped to feed and shelter up to 50 people. A partnership soon developed with the lodge’s owner Vancouver Island Forest and Marine, which is leasing the facility to Ka:'yu:'k't'h'/Che:k'tles7et'h' to serve as the new Walter’s Cove Resort.

The Englefield most recently housed forestry workers on various parts of the West Coast, but now it returns to its role as a fishing lodge, which is what the facility was originally designed for when it was built in 2000.

More than a fishing lodge

As Walter’s Cove embarks on another busy fishing season, ongoing threats to the survival of Pacific salmon have made it clear that less reliance on the activity will be necessary for the operation to remain sustainable. In recent years the DFO, First Nations, aquaculture companies and other interest groups have been scrambling to better manage the resource as some salmon stocks have declined to the brink of extinction.

This has put pressure on the lucrative sports fishing industry to play a larger role in controlling what salmon are being caught. The Nuu-chah-nulth Council of Ha’wiih Forum on Fisheries has called for a ban to the catch-and-release method currently permitted for at-risk salmon stocks, as well as “increase catch monitoring standards for charter and lodge operators.”

“The recreational fishery is a significant source of mortality for all [west coast Vancouver Island] salmon,” stated a March 1 letter from the council to Fisheries and Oceans Canada.

“We’re transitioning away from our primary focus being on fishing, to focus being on eco and cultural tourism,” explained Blackstone. “We will still be able to provide fishing, but it won’t be the 100 per cent focus on it. I don’t think that we can really get away from it.”

How exactly Walter’s Cove’s sports fishing trips will be replaced remains to be seen, but potential is evident nearby on Spring Island, where the base camp lies for West Coast Expeditions. This spring the Ka:'yu:'k't'h'/Che:k'tles7et'h' First Nations Group of Businesses announced its purchase of the touring company, which has a 50-year track record in Kyuquot Sound. Hosting hikes and multi-day kayaking tours as far north as Brooks Peninsula, the acquisition fits in with the First Nation’s aim of developing a more “sustainable, conservation-based economy,” according to a press release.

Hunger for a ‘transformational’ experience

Over its years as a fishing lodge, Walter’s Cove guests were greeted by Ka:'yu:'k't'h'/Che:k'tles7et'h' member Daisy Hanson, who welcomed them in her ancestral language. It’s an acknowledgment of the territorial heritage that is becoming increasingly sought after, particularly among visitors from oversees, said Keith Henry, president and CEO of the Indigenous Tourism Association of Canada.

“It’s never been stronger, because everyone is trying to figure out reconciliation, but they don’t actually know how to do that,” he said, adding that Indigenous tourism is attracting a wider variety of clients than what the association previously thought, according to surveying. “It’s showing young families, single people. People just really want to understand.”

Henry works with approximately 1,900 Indigenous-owned businesses across the country with a stake in tourism. The sector’s gross domestic product grew from $1.4 billion in in 2014 to $1.9 billion the year before the pandemic hit, reported the association. After fears of permanent closures and the loss of international travellers due to COVID-19 restrictions, 2021 still brought the highest sales yet from Canadian customers.

“There’s never been more motivation in Canadians themselves to try and find new things locally,” said Henry, noting how the pandemic forced many people to reflect on environmental values. “People realized that this planet is not sustainable as we once thought it was. Part of their journey as non-Indigenous people is learning Indigenous values because they think they’re better values.”

“People are looking for an Indigenous experience when they travel here,” added Paula Amos, chief marketing and development officer with Indigenous Tourism BC. “They want more than just to visit the location; they want to have an authentic, transformational experience.”

The benefits of ownership through treaty

As a resident of the First Nation’s village of Houpsitas, Janice John-Smith undertakes weekly grocery runs to Campbell River, a round trip across water, gravel road and highway that can be upwards of 12 hours. But despite the challenges of living in the remote community, the hereditary chief gladly calls Kyuquot home, where she has raised children and grandchildren.

She observed Walter’s Cove Resort with excitement as it prepared for the first guests of the season.

“It’s so exciting to see our people working here,” said John-Smith. “I’ve seen our nation grow - like this Waters Cove Resort, this is something huge for us.”

The reopening is the latest of many that have marked the last 11 years of treaty implementation for the First Nation. As part of the Maa-nulth Final Agreement, Ka:'yu:'k't'h'/Che:k'tles7et'h' are among just seven First Nations in British Columbia with a fully-implemented modern-day treaty. The agreement has enabled the First Nation to progress economically through land ownership recognized under Canadian law.

“The main thing that it’s helped many levels throughout the nation is the fact that we own the land,” said Blackstone. “The nation is an entity that can own land, versus Indian Act nations that are not permitted to own land.”

Looking into the future, the First Nation hopes to explore the use of recreational tenures it holds throughout its territory.

“We would like a land-based lodge, that’s another thing that I see for our future,” added Blackstone. “We’d like to put in some mountain bike trails, we’d like to add in some surfing, there’s a couple of beaches here that would be good. That would extend our seasons into the spring and the fall.”

John-Smith admits to being against the treaty before it was implemented, but now it has become evident how the agreement is helping Ka:'yu:'k't'h'/Che:k'tles7et'h' to determine its future.

“I was scared…I didn’t know what we were getting into,” she said. “I was really scared for my children and grandchildren, but I see it different…the changes that are happening.” 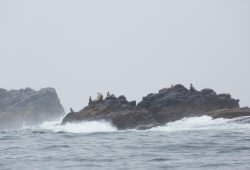 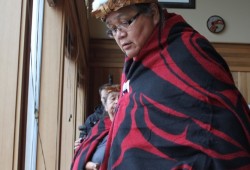 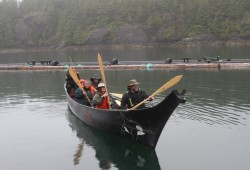 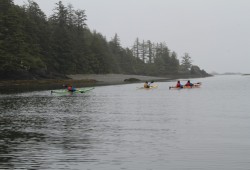 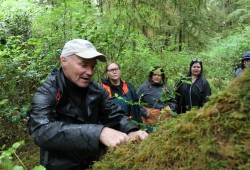 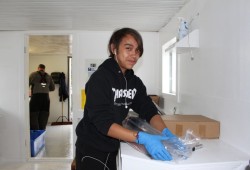 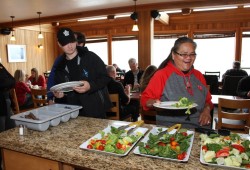 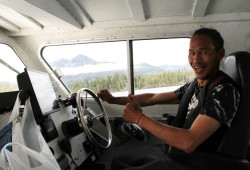