Booms are placed around a sinking vessel in the Alberni Inlet on July 13. (Western Canada Marine Response Corporation photos)

The Canadian Coast Guard (CCG) responded to a report on the morning of July 11 that a 34-foot gillnetter got caught on rocks as the tide was receding, causing it to sink.

The vessel, which was actively fishing, had 500 litres of diesel fuel onboard, which is slowly leaking into the marine environment.

The Western Canada Marine Response Corporation (WCMRC) was mobilized to work alongside the CCG to respond to the incident near Hocking Point in the Alberni Inlet.

In an email on July 11, WCMRC Indigenous Relations Advisor Jonathan Wray wrote that fuel was leaking from the vessel where there’s an active salmon run.

At the time, the CCG said the vessel owner had hired a contractor to salvage the vessel on July 12.

“The responders on scene are actively containing and recovering the small amount of oil that is coming from the vessel, thus minimizing any impact to the environment,” the CCG said on July 11. “By ensuring that the vessel is removed quickly, the impacts to the environment will also be minimized.”

Now, Wray said the owner of “Robert Brian” and the salvage company that was hired “have gone completely dark and are not returning any calls.”

On July 13, the CCG assured it was working towards a salvage contract, but they do not yet have a salvage date.

“As the vessel owner has failed to take action, the CCG is making plans to have the vessel removed from the marine environment,” the CCG said.

Following the vessel’s removal, the CCG will make a claim to the Ship-source Oil Pollution Fund, which covers damage caused by spills in Canadian waters.

When WCMRC crews arrived on scene July 13, “the vessel was gone and appears to have fully sunk in about 130 to 150 feet of water,” according to Wray.

A boom was positioned around the vessel on July 11 to contain the spill, and sorbent pads were placed within the containment area to absorb diesel that had leaked out, said Michael Lowry, WCMRC senior communications manager.

This containment was temporarily compromised on July 11 when the wind kicked up and caused the vessel to swing and catch the boom, Wray said.

The boom was further compromised overnight on July 12, which Wray said likely occurred as the boat sank.

Despite the vessel being completely submerged, Lowry said it doesn’t change their response efforts.

A boom remains in place around where the vessel has gone down. While WCMRC continued to observe “very minor” oil upwelling into the containment boom on July 13, none have been observed on July 14.

“The [upwellings] have died down,” said Lowry. “We’ll continue to monitor the situation until the coast guard tells us to stand down.”

Between 1500 to 2000 pounds of sorbent pads have been recovered so far, said Lowry.

A navigational warning has been issued to notify mariners of the hazard in the area.

Anyone observing marine pollution in the area is asking to report the sighting to the CCG by calling 1-800-889-8852. 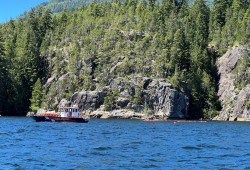