The University of Victoria’s First Peoples House, located at the heart of the campus, is a social, cultural and academic centre for Indigenous students, serving as a welcoming place that encourages community building. (UVic Photo Services photo)

The University of Victoria (UVic) is set to deliver the world’s first custom master’s degree in business administration in Indigenous Reconciliation.

Developed in partnership with the BC Association of Aboriginal Friendship Centres (BCAAFC), the MBA was unveiled on July 8.

It was revealed as part of an $8.4-million funding announcement by the Ministry of Social Development and Poverty Reduction, that will “create an action framework to integrate reconciliation into community social services,” according to a release from UVic.

“We are honoured by the invitation to collaborate on this unique program,” said Saul Klein, dean of the Gustavson School of Business. “This MBA will equip leaders in social services, government and non-profits to meaningfully advance reconciliation in their organizations and across our broader society.”

Leslie Varley, executive director of the BCAAFC, said the social services sector made a commitment to reconciliation as their “top priority” and offered her the opportunity to identify some actions that would “start us down that path towards reconciliation.”

After the province invited Varley to submit a proposal to help build and maintain capacity within the social services sector, she motioned to create an “Indigenous-focused not-for-profit-focused master’s in business administration for Indigenous leaders.”

It was presented to six different universities and UVic ultimately came out in front because of the work they’ve been doing towards reconciliation “on their own accord,” said Varley.

In her position, Thomas is providing “strategic leadership and direction in all aspects of our work towards decolonization and self-determination of Indigenous peoples,” read a release from UVic.

“That is action that speaks our language,” said Varley.

Thomas said the university reflects on the “injustices created by colonial policies and practices, and is committed to offering programs that meet the needs of the local Indigenous communities.”

The new MBA program follows others, such as UVic’s Indigenous language revitalization education and the university’s joint degree in Indigenous legal orders and Canadian common law.

By customizing the MBA so that it’s specific to the non-profit and Indigenous sectors, Varley said it “addresses our successor succession planning needs and develops our future Indigenous leaders.”

Many executive directors who work at the 25 different friendship centres across the province are preparing to retire, including Varley.

Through succession planning, Varley said they hope to leave the sector in a “better position” than when they arrived.

There are more than 29,000 non-profit organizations in B.C. that employ more than 86,000 people, contributing $6.7 billion to the province’s economy.

And yet, Varley said Indigenous organizations get 10 per cent less funding than the mainstream social service organizations.

“Anybody who's Indigenous knows that we seem to need to be doubly qualified to be considered legitimate,” she said. “Our work is highly scrutinized by funders, and by the public – and we seem to need to jump through a lot more hoops than any regular funder.”

It’s with this in mind that Varley said she designed the MBA program.

The program follows a “closed-enrolment model,” meaning students in the program will be selected by a committee formed of executive directors working in the not-for-profit sector, said Varley.

Anyone who’s working in an Indigenous not-for-profit organization is encouraged to apply. Priority will be given to Indigenous applicants, as well as people of colour.

There is currently funding available for two cohorts, for a total of 50 seats. The first cohort is slated to start in February 2023, said Varley.

The MBA is open to applicants who may not have the prerequisites universities often require, she said.

“They don't have to have done their colonial academic push-ups in order to get into this MBA program,” Varley said.

A separate advisory committee consisting of executive directors within the sector is being formed to address what is needed within each of the courses, said Varley.

“Drawing from the non-profit, social-service and government sectors, cohorts will be intentionally designed to include Indigenous and non-Indigenous participants,” according to a release from UVic.

Nuu-chah-nulth Tribal Council President Judith Sayers said the MBA sounds like a “good initiative” for the BCAAFC, “but the title is misleading.”

“If I was going to design an MBA on reconciliation, I would want to open it to everyone,” Sayers said. “And not just [make] an exclusive degree for one organization ... the optics are really bad.”

Sayers said she isn’t opposed to First Nations organizations approaching UVic to help them “design a program specifically for their organization.”

“But if they’re really wanting to do an MBA on reconciliation, I thought it would be better to open it to everybody,” she said.

Varley said B.C.’s wider community social services sector made it clear that funding going into the sector needed to prioritize reconciliation, which is where the “term” came from.

“These are foundational grounding steps that will take us along that path towards reconciliation,” she said. “This is certainly not reconciling, but I don't know how we get to reconciliation without putting out those steps to get us there.”

Brent Mainprize, teaching professor at UVic’s Gustavson School of Business, said that “reconciliation is a lens for everyone to look through.”

“This program brings together Indigenous and non-Indigenous professionals to learn from each other about their cultures and build a shared understanding of and commitment to reconciliation that can be designed in the classroom and immediately put into action in students’ organizations and communities,” he said in a release.

The MBA program will also draw on funding from BCAAFC and Indspire, a national charity that invests in Indigenous education.

“This is a big step,” said Varley. “[It’s] something to celebrate.” 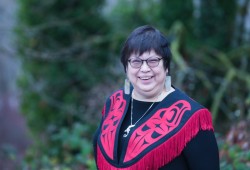