Boats fish for sockeye salmon on the Somass River in early July, as part of the Tseshaht and Hupacasath First Nation’s community fisheries. While the sockeye run for the Somass River was forecasted to be an average size this year, other parts of the B.C. coast have expected more modest numbers. (Eric Plummer photos)

Nuu-chah-nulth representatives can expect more meetings with high-level DFO officials in the future, according to the head of a $647-million federal initiative designed to turn the tide of Pacific salmon declines.

This was the reassuring message from Sarah Murdoch, senior director of the Pacific Salmon Strategy Initiative, a large-scale project launched a year ago to “stem historic declines in key Pacific salmon stocks and rebuild these species to a sustainable level,” states Fisheries and Oceans Canada.

“It is meant to be a framework that reflects how DFO is going to be better integrating and managing salmon activities that are meeting the challenge of historic declines,” said Murdoch in a recent interview with Ha-Shilth-Sa. “It is meant to be a way to make DFO a better partner going forward.”

At stake is the future of Pacific salmon, a species that has seen declines reaching near extinction among some West Coast stocks. Wild chinook on the west coast of Vancouver Island are listed with the major stocks that require rebuilding in Canada’s Fisheries Act, and the Committee on the Status of Endangered Wildlife in Canada lists several chinook populations west of the island as threatened.

“Many of the [west coast Vancouver Island] salmon streams Nuu-chah-nulth nations relied on for some of their food and economic harvests are now too low in most years to support even small food harvests,” stated the Council of Ha’wiih Forum on Fisheries in a letter sent to Murdoch in March. “Kennedy Lake sockeye returns, which used to support commercial fisheries, are so low that Tla-o-qui-aht Nation has closed access to these fish to their members since 1992 for conservation concerns.”

The PSSI pledged to tackle such concerns, when it was announced as “the largest, most transformative investment in salmon by any government in history” by former fisheries minister Bernadette Jordan in June 2021.

But one year later frustration had reached a boiling point among Nuu-chah-nulth leaders for being left out of the decision-making process. In October 2021 the Council of Ha’wiih passed a resolution condemning the federal government for determining what should be done in Nuu-chah-nulth territorial waters.

This language followed an announcement by the council that two thirds of the PSSI would be used within Fisheries and Oceans Canada, with another $100 million for the Salmon Restoration and Innovation Fund.

“Your mismanagement to date has collapsed our fisheries to near nothing,” said Hasheukumiss, Ahousaht’s acting Tyee Ha’wilth, to DFO representatives during a June fisheries forum in Tofino. “For too long we have been pushed to the side and our knowledge has been ignored.”

During the forum the First Nations Fisheries Council of BC also announced its opposition to the PSSI in its current state.

“All they did was shuffle money around in their own department,” said Hugh Braker, president of the fisheries council. “It’s not enough for bureaucrats in Ottawa and Vancouver to decide what’s best for Pacific salmon.”

Murdoch defended the $647-million initiative, explaining that it entails the DFO “reinventing” how it approaches salmon, with regulatory and policy changes as well as hiring more staff to focus on rebuilding stocks.

“There will be quite a bit of funding going out to fishers, both Indigenous and non-Indigenous,” said Murdoch. “In a few different areas there is going to be some shifting and growth. It will be new investments in science, for instance, largely focused on what we’re realizing more and more, and getting to understand what’s going on from a science perspective in terms of climate change and some of the broader ecosystem impacts.”

“We certainly agree that we can only do this in partnership with local First Nations,” she added. “DFO has a leadership role to play certainly, but others do as well.”

After the announcement of the initiative, the Council of Ha’wiih provided DFO with its own priorities to better manage Pacific salmon. These include the increased use of genetic tools for assessing stocks and managing hatchery-raised and wild populations. Better catch accounting is needed for fisheries that intercept chinook, wrote the council, while improved monitoring for the recreational sector is long overdue.

Murdoch said that improved surveys of B.C.’s south coast are coming, as are enhanced compliance inspections for the sports fishery from conservation officers.

Several hatcheries on the B.C. coast are also due to a “retrofit” to better support the rebuilding of salmon stocks, said Murdoch. This entails upgrades that some of these facilities haven’t see in many years.

“One key example is Rosewall hatchery on eastern Vancouver Island,” explained Murdoch. “This facility has supported conservation and rebuilding initiatives across the Island and Sunshine Coast, including the Nahmint River Chinook program. Expansion of this secure conservation site will increase DFO's ability to support conservation priorities such as Nahmint, as well as other new potential priorities such as sockeye salmon rebuilding.”

As much as $94 million of the PSSI is expected to be used to buy out existing salmon licences, a practice the DFO has undertaken since the mid-1990s. With the commercial fleet nearly cut in half of what it was 25 years ago, voluntary licence retirement will continue to be an option.

“It was intended to reflect the difficulty that a lot of fishers are having hanging on from year to year,” said Murdoch. “We want it as an option for fishers to transition out of the sector, particularly given that many fishers are of retirement age.”

One month after the PSSI was announced last year, the DFO closed 60 per cent of commercial salmon fisheries on the B.C. coast. As some closures continue to be in place, Murdoch cautions that the salmon industry will need to be different in the future.

“Looking ahead 10 years, what we’re projecting is that we’re going to need long-term closures,” she said. “We’re not going to be able to support fisheries as they once were, we’re going to have to have much more modest harvest levels.” 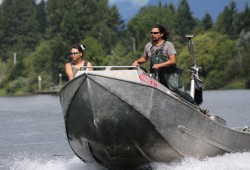