Pope Francis embraces a First Nations delegate in the Vatican April 1. During an event Edmonton on July 25, the Pope apologised for abuses committed by members of the Catholic Church while operating residential schools in Canada. (Vatican photo)

Today the Pope concludes his five-day visit to Canada, leaving behind mixed feelings among First Nations communities after he apologised for the pain caused by the residential school system.

Pope Francis made stops in Edmonton, Iqaluit and Quebec City July 24-29, addressing former residential school students and Indigenous leaders at each event. His visit follows a meeting with First Nations, Métis and Inuit representatives at the Vatican on April 1, when he recognised the “deplorable behaviour” of Catholics who abused children while working at residential schools.

This message continued while Pope Francis gave a statement at the former site of the Ermineskin Indian Residential School in Maskwacis, Alberta.

“I am sorry. I ask forgiveness, in particular, for the ways in which many members of the church and of religious communities cooperated, not least through their own indifference, in projects of cultural destruction and forced assimilation promoted by governments of that time, which culminated in the system of residential schools,” said Pope Francis to residential school survivors and delegates at the event. “What our Christian faith tells us is that this was a disastrous error, incompatible with the Gospel of Jesus Christ.”

Many of Canada’s residential schools were run by the Catholic Church, leading the Truth and Reconciliation Commission to list the need for a papal apology for the church’s role in the institutionalisation of Indigenous children among its Calls for Action.

Before the Pope’s visit Terry Teegee, regional chief of the B.C. Assembly of First Nations, expressed hope that the apology would be on behalf of the whole Catholic Church, rather that for certain members who abused children. The BAFN has since accepted the Pope’s apology.

“The apology is a signal for all members of the Roman Catholic Church to accept responsibility, and the shame, of the evil atrocities that were committed upon generations of Indigenous peoples,” stated Teegee in a press release. “Together we are confronting difficult truths that have shaped Canada’s economic, social and cultural institutions that continue to systematically deprive First Nations of freedoms, liberty and rights.”

“I just think he should have made a full, all-out apology from the very beginning of the Catholic Church’s involvement in residential schools - on behalf of the church, on behalf of all those people - and all the abuses,” she said.

Sayers noted that a funding commitment to help survivors with healing would have been much more meaningful, as well as a promise to turn over all residential school records.

“Those were the substantial pieces that I thought were missing,” she said.

For the better part of a century the Catholic Church operated the Christie Indian Residential School, which housed First Nations children on Meares Island from 1900 to 1973, before it moved to Tofino for a decade.

Bernard Jack attended Christie from 1968-73, starting at the age of six when he was taken from his home in Yuquot. At that time the Mowachaht/Muchalaht First Nation member didn’t speak English, but was punished for using his native language at the school. He recalls seeing graves there, and was discouraged from acknowledging them while at the school. Jack has seen this environment affect many former students for the rest of their lives.

“I don’t know how many generations I’ve seen lost through my life, my schoolmates, my uncles and aunts, due to alcoholism,” he said. “There was nowhere else to turn.”

For Jack, the papal apology carries no meaning.

“It’s too little too late…I’m just so sickened by this,” he said. “Why was that religion thrown in our face when we had our own custom?”

Eldon Yellowhorn has older siblings who attended the residential school that once stood where Pope Francis delivered his apology. Now the next steps will be how the Canadian Congress of Bishops and local diocese follow through with supports, he said.

“That’s why the church has an obligation to do ongoing work with communities,” said Yellowhorn, who is a member of the Piikani Nation and a professor of Indigenous Studies at Simon Fraser University. “As apologies go, it’s a start, and I don’t think we can say that this is the last word on it.”

The apology has opened up expectations for the Catholic Church to step back more than 500 years to revoke an order that fueled the ensuing wave for European colonialism. Effectively beginning in 1492 with Pope Nicholas V – in the same year that Christopher Columbus began his expeditions to the Americas – the Doctrine of Discovery was an international legal principle holding that European Christian nations could acquire Indigenous territory by making landfall, raising flags, planting crosses or digging soil.

More than five centuries later, some are looking for Pope Francis to acknowledge a cultural dilemma that is still tied to imbalances in Canadian society.

“Going forward, Pope Francis’ apology will become meaningful and sincere when he rescinds the Doctrine of Discovery and denounces the concept of terra nullius which, under international law, gave licence to explorers to claim ‘vacant’ lands in the name of European sovereigns,” said Teegee.

But such revisions are slow for the Roman Catholic Church, as shown by the fact that it took the institution 359 years for Pope John Paul II to declare Galileo’s theory that the earth moves around the sun is right. John Paul made this official statement in 1992; under threat of torture, Galileo was forced to revoke his theory in 1633. A similar process took place to finally recognise Copernicus. 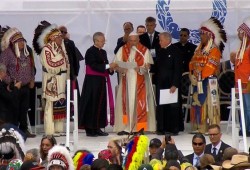 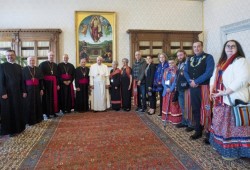 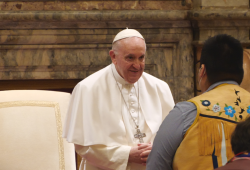