Showcasing what’s possible by Indigenous-owned businesses was the main message behind the second annual Cims Fest at Chims Guest House on Tseshaht territory.

Naomi Nicholson and her husband Ed hosted the event for the second consecutive year at their property on Aug. 6. The couple, who own Chims Guest House at 6890 Pacific Rim Hwy., want to bring Indigenous and non-Indigenous people together to build a relationship through a shared cultural experience. The festival showcased Indigenous artwork and vendors, a fashion show, traditional food, storytelling, song and dance.

The event was also a fundraiser for Haahuupayak Elementary School for their food program and for the Namwayut Cultural Group, who performed at the event, to purchase new regalia.

“I want to showcase what’s possible,” Naomi said. “I really am promoting reconciliation. My biological mother would have never been able to do this, so the fact that I get to do this is amazing. That’s why I share the constraints about being on the reserve because a lot of people have misconceptions about Indigenous people. Until you have a new experience to replace your old experience, you can’t change your mind.”

Last year, Naomi and Ed expanded Chims Guest House from one studio suite and a one-bedroom guest house to include four serviced RV sites. This year, they’ve expanded again, adding one new tiny home to the property, with plans to add two more in the near future.

The one-bedroom tiny home, that Naomi has named the ‘Hummingbird Home’, was built by Mint Tiny House Company out of Delta and will be available for professional short-term rentals and possibly personal long-term accommodation as well.

“I could rent this short term to somebody who needed housing,” Naomi said, adding that operating a business on the reserve does gives her some flexibility. “I don’t have the same rules as the ACRD where [someone] can only stay eight months.”

However, Tseshaht First Nation does have a housing policy regarding mobile homes and their use for permanent residences. A band council resolution with “very specific conditions pertaining to the Chims Guesthouse business” has been passed, according to the First Nation. A business licensing policy is also being finalized for members operating on reserve, something that the First Nation expects will be ready for implementation in 2023.

“While there are differences in on and off-reserve residential rental regulations, Tseshaht First Nation has informed Ha-Shilth-Sa that their current housing policy does have criteria and limitations related to mobile homes/recreational vehicles,” stated the First Nation in an email.

As the Tseshaht finalizes the details of how mobile units will be regulated on reserve, the goal for Naomi and Ed is to add two more tiny homes on the site’s RV pads.

Mint Tiny House Company are certified builders and build under the RV and park model certification, therefore anywhere that land is designated for an RV or a park model, a tiny home can legally be parked on it. In addition, because the company are certified builders, people can legally get financing to purchase a tiny home, which range from around $119,000 to $182,600, and they can be insured.

In addition to touring the new tiny home, guests at Cims Fest were able to watch a fashion show that showcased Indigenous clothing from Naomi’s personal collection.

“When you get an (Indigenous-made) item there’s always a story about it, so this is where you can change; when somebody asks you, ‘Well, are you allowed to wear that?’ you can say, ‘Yes, I can,’ and then you tell them the story,” Naomi said.

“I never imagined when we got together that we were going to grow all of this,” Ed said. “This is something [Naomi] was talking about when we first met 10 years ago and she’s just never given up.”

Editor's note: Additional information has been added to the article regarding the regulation of mobile homes on the Tseshaht First Nation reserve. 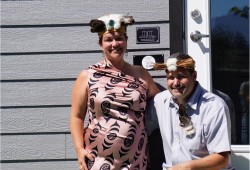 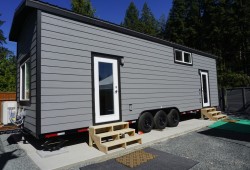