A 25-bed overnight shelter will soon be available for Port Alberni’s homeless population at the Bread of Life on Third Avenue. (Karly Blats photo)

A portion of Port Alberni’s unhoused population will soon have access to a temporary overnight shelter located at the Bread of Life on Third Avenue, but not all of the soup kitchen’s neighbours are thrilled about it.

City council voted in favour of a temporary use permit (TUP) for the low-barrier shelter at a regular meeting of council on July 11. The 25-bed shelter will be operated by the local Salvation Army at the Bread of Life’s drop-in centre and funded annually by BC Housing.

A letter to Port Alberni city council from a group of concerned citizens voiced opposition to the shelter and asked city council if they wanted to “turn the complete side of town, which Third Avenue runs through, into a homeless shelter.”

The letter claims most established businesses don’t want to see “the homeless” sleeping or leaving residue on their doorsteps, which they say are the same issues being faced by neighbours of the Overdose Prevention site on the corner of Third Avenue and Bute Street.

At the July 11 meeting, H&R Block owner Rick Slemko told council he was shaking angry as he read his letter of opposition to a temporary shelter. Slemko said he’s had to pick up garbage, syringes and human waste around his storefront on several occasions from individuals accessing the Bread of Life. He’s found people sleeping in his doorway and said on occasion his customers don’t feel safe entering the office.

“The Bread of Life is far too small for this. It seems to me little or no consideration has been made for a more feasible long-term location,” Slemko said. “I cannot believe this, 25 more people living in a business area. [The Bread of Life] are bad neighbours already and I’m sure it’s going to get worse.”

Mayor Sharie Minions recused herself from the discussion due to a conflict of interest as she is married to Colin Minions of the Salvation Army. Coun. Ron Paulson was the only councillor not in favour of permitting a TUP for the shelter. He doesn’t believe the Bread of Life, which is next to the Harbourview Apartments and the Rack and Rally club, is the best location for the shelter and the clientele that will access it.

A temporary-use permit, granted under the Local Government Act, can be in place for three years and can be renewed one time for another three years. Completion of a Good Neighbour Agreement and an approved fire plan are both conditions of the TUP. There’s no expansion to the building proposed in the application and renovations will be internal to the structure.

Colin Minions of the Salvation Army said BC Housing approached them about turning the temporary drop-in centre at the Bread of Life into a year-round 24-hour shelter due to the current shelter on Eighth Avenue being “overcapacity on most nights and a growing need.”

“We were able to touch base with many local surrounding businesses. We were able to connect with Dog Mountain, Coastal Restoration Society, which is set to make a big investment in the area and some others,” Minions said. “Some were largely in support, some had a lot of questions and concerns that we’re able to address.”

The owners of Dog Mountain Brewing across the street from the Bread of Life and the Coastal Restoration Society, which recently purchased the former BMO building on the corner of Third Avenue and Argyle Street, wrote letters of support for the new shelter.

A few other business owners voiced concerns about the shelter through letters to council. Neighbour Keith Ambrose spoke to his opposition at the meeting.

“The soup kitchen has been a horrendous neighbour,” Ambrose said. “There’s no inclusiveness in this plan, I’m a neighbour and I wasn’t included in anything.”

Colin Minions said the shelter will be operated from 8 p.m. to 8 a.m. and people can’t come in and out.

“During the day we see 150 people in and out and it’s constant traffic…so at night once they are in, they’re in,” Minions said. “There’s been concerns about the use of the sidewalk space in front, so we’re in the process of…having a grant approved to build a patio off of the back in the backyard, which will allow people to go outside to smoke or hangout at night - or just generally keeping people off of the sidewalk.”

Cherie Edgar, a hereditary chief for Tseshaht First Nation who also volunteers at the Bread of Life, told council that the shelter likely won’t draw anyone new to the area.

“These people deserve a place to sleep irregardless of what got them there. These are not bad people. All we’re doing is trying to give 25 people a place to sleep,” Edgar said. “We’re not attracting anybody else into the area that’s not already there. We feed 150 people a day and then they’re off and they’re sleeping in everybody’s doorways because they don’t have a place to go.”

The funding through BC Housing will also include opportunities for case management for those accessing the shelter.

Down the street from the Bread of Life, a visible problem with homelessness can be seen on Fourth Avenue around the Wintergreen Apartments and bottle depot. Individuals have begun setting up tarps and other makeshift shelters along the sidewalks with bags, personal items and shopping carts pilling up nearby.

Some businesses owners in the area are fed up with crime, vandalism and open drug use occurring at or near their businesses.

Kam Bingg, owner of Port Autotech at 3717 Third Ave., said a stack of pallets and tires was set on fire outside his business on Monday, Aug. 23. Luckily firefighters were able to get the blaze out quickly.

Business owners in the area plan to bring their concerns to the next city council meeting on Sept. 6.

In another attempt to help the unhoused population, the Salvation Army sets up a mobile three-stall shower unit on an empty lot in front of Dry Creek Park from 6–10 p.m. up to four days a week.

The showers must be moved off the property outside of the allotted time. The mobile showers are on loan from the Salvation Army ARC in Victoria. They are staffed and sanitized between uses. 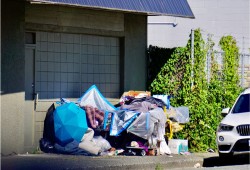