The disclosure of internal correspondence between DFO and the Sports Fishing Advisory Board has raised conflict of interest concerns, leading a First Nations’ fisheries group to call for two biologists to leave the federal department.

With the aim of collectively supporting Indigenous fisheries, the Island Marine Aquatic Working Group is composed of representation from 14 Vancouver Island First Nations, encompassing Nuu-chah-nulth, Coast Salish and Kwakwaka’wakw communities. Suspicions grew among the group two years ago, when IMAWG had difficulty getting data on chinook salmon from Wilf Luedke, a stock assessment biologist with Fisheries and Oceans Canada, despite repeated requests.

“Our Indigenous technical organization required this information in order to provide sound management advice to our First Nation membership,” stated IMAWG in a summary document.

“As a last resort”, the group submitted a formal request under Canada’s Access to Information and Privacy acts, asking for a wide range of chinook data and information from 2019 and 2020.

IMAWG stated that the request was made due to concerns over Luedke’s dealings with the recreational fishery, “hence the specific request for all emails between Mr. Luedke and members of the [Sport Fishing Advisory Board].”

Since 1964 the Sport Fishing Advisory Board has advised DFO on fisheries management.

“DFO organizers, after considering the input of the SFAB executive and members, will provide access to agendas and information needed as a starting point for informed discussion well in advance of meetings,” states the advisory board’s principles. “In addition, this information will be posted to a public website to ensure accountability to all Canadians.”

But after reviewing over 400 pages of documents and correspondence dating back to early 2019, IMAWG stated that it was led to believe that Luedke was “working in stock assessment primarily to benefit the recreational fishery, and as a result the management of salmon has been compromised.”

IMAWG’s summary also names DFO biologist Diana Dobson, who is Luedke’s spouse, for participating in these dealings with the recreational fishery.

“Throughout the emails we see Mr. Luedke sharing documents and tools with SFAB that were not shared with IMAWG despite their requests,” continued IMAWG’s summary statement. “Rather than acting as a DFO biologist, Mr. Luedke appears to be acting as a member of the recreational industry or SFAB.”

In June these concerns were presented to the Nuu-chah-nulth Council of Ha’wiih Forum on Fisheries, where frustrations with the federal department escalated during a meeting in Tofino that was hosted by the Tla-o-qui-aht First Nation.

“These people are supposed to represent the public and Canada,” said Tla-o-qui-aht Fisheries Manager Andrew Jackson. “We need to expose it.”

“We as Nuu-chah-nulth need to gather and show how upset we are,” he said.

Luedke did not respond to Ha-Shilth-Sa’s request for comment on IMAWG’s concerns, but the DFO stated that allegations of a possible conflict of interest are considered seriously by the department. Since the June fisheries forum the DFO has “reviewed the complaint as reported by the Island Marine Aquatic Working Group, and the matter is now closed,” according to an email sent to Ha-Shilth-Sa.

“Work is underway to improve our data systems, including storage and access, with the goal of increasing efficiency and transparency,” added the DFO.

An email from a SFAB member shows a reluctance to share data with Indigenous groups.

“[M]ost of the responses to DFO from First Nations regarding management options for Fraser River chinook stocks of concern were frankly hostile to the recreational fishery,” stated the email from April 2019. “We collectively decided to make the data public, but if it’s going to be used against the recreational fishery in a user-group-versus-user-group non-scientific way, I think we have a problem with continuing to make the data widely available.”

In that month DFO announced that some chinook salmon stocks in the Fraser River were “in danger of disappearing from Canada,” according to assessments by the Committee on the Status of Endangered Wildlife in Canada.

Strict measures were introduced that spring to better control chinook fishing, with tighter catch limits for sports fishers and delayed openings for many areas until mid July or August. In May more restrictions were announced to protect the offshore feeding grounds of the endangered southern resident killer whales.

As 140 conservation officers patrolled the Fraser River by land, water and air, members of the Sports Fishing Advisory Board spoke of the tightest fishing restrictions the industry had seen in years, according to the correspondence provided to IMAWG.

This wasn’t good for business for a tidal and freshwater industry that generates over $1.1 billion annually, supporting approximately 9,000 jobs, according to DFO figures.

“The multi-day anglers will not pay $2,000-4,400 per person for a fishing trip to go home with one large halibut and a couple of rockfish,” stated SFAB information sent in 2019. “Their motivation is chinook and the expectation to keep a couple of them on a multi-day trip. They will not make a ‘long haul’ trip without a reasonable limit of chinook salmon. They will not tow a boat from Washington State to Nootka or Kyuquot Sound, with all the travel expenses, plus the local service costs when chinook is at 0 during this time frame. Marinas and lodges would be vacated.”

In April 2020 an email within the DFO to Luedke indicated concerns that the department could be swaying too far in favour of the sports fishery, which remained open at the height of COVID-19 pandemic restrictions.

“I am concerned that we remain the non-partisan Department of Fisheries and Oceans, not the Department of Recreational Fisheries,” wrote a DFO official that the Ha-Shilth-Sa is keeping anonymous. “Yes, we need to listen to all stakeholders, but we do not have to follow their every wish. We need to speak for not only the fishing community as a whole, but for the fish themselves. We are supposed to design and conduct risk-averse fisheries…‘No’ has to be an option for the long-term viability of the resource.” 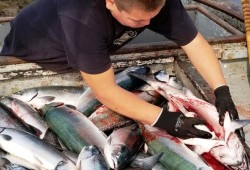 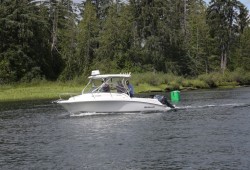