By mid September the Stamp River was full of chinook salmon, headed toward Stamp Falls and the fish ladder that will lead them towards Great Central Lake. This is one of the last chapters in the species' multi-year migration that will culminate in reproduction and death. (Eric Plummer photos)

In mid September Tseshaht and Hupacasath fishers were casting their nets in the Somass River, taking advantage of the last days of a large chinook salmon run.

In recent years Fisheries and Oceans Canada has stressed the growing challenges facing Pacific salmon. The department’s 2019 State of the Canadian Pacific Salmon report stressed the environmental impacts of a warming climate on the fish, which normally thrive in cooler waters. The report stated that chinook are declining throughout their range, while some southern B.C. sockeye populations face imminent extinction.

But this year the number of sockeye that returned from their ocean migration to Barkley Sound and the Somass River ended up being double the pre-season forecast, while approximately 135,000 chinook are expected to come back. The area’s chinook fisheries are heavily reliant on breeding the large salmon in a hatchery by Great Central Lake, which produces 90 per cent of what returns to the Somass watershed.

“All in all a decent season,” summarized Dave Rolston, fisheries manager for the Tseshaht First Nation. “The sockeye runs are doing reasonably well, for the most part, and this year was a good one. And the chinook is pretty steady. So all of those factors combined attract a lot of fishermen, a lot of commercial fishermen, a lot of rec fishermen, so it’s a very dynamic and busy fishing location.”

Area 23, which includes Barkley Sound and the Somass River, is managed throughout the season by weekly round-table meetings, with participation from the local First Nations, DFO as well as representation from the commercial and recreation sectors. On some days commercial openings attracted over 200 vessels on the Alberni Inlet, said Rolston, while 200 to 300 Tseshaht members took to the river to participate in the Somass fishery, representing as much as one quarter of the First Nation’s population.

Murrell doesn’t expect that the two First Nations will reach their total allowable catch limit (TAC), which was set at around 37,700 chinook between Tseshaht and Hupacasath for the season.

“They did show up early, you would have thought they would have been slower with not much rain happening,” he said of the chinook migration up the Alberni Inlet and into the Somass River. “We’re ahead of the curve definitely, in terms of escapement.”

Rolston noted that chinook and coho “came in very quickly”, a dynamic he says could have been attributed to cooler water conditions this year. By late August Vancouver Island entered a Level 3 drought stage, after reaching the severe Level 5 during the same period in 2021.

“They didn’t spend a lot of time in the harbour, waiting at the top end of the inlet,” said Rolston of this year’s chinook and coho migration. “That made it challenging to catch our TAC.”

A ‘chess game’ of co-management

As in most years, the First Nations harvested from the river under an economic opportunity agreement with DFO. Eighty to 90 per cent of catches were sold to two Vancouver Island companies: French Creek Seafood from Parksville and Hub City Fisheries of Nanaimo. Although he didn’t expect the Tseshaht would reach their total allowable catch, Rolston estimates the chinook run generated $1.5 million for the Tseshaht First Nation.

“There was opportunity for a number of our members to earn a living,” he said, noting that this is possible from the commercial, recreational and First Nations fisheries jointly coordinating a management of the area over the course of the fishing season.

According to the most recent Somass fisheries bulletin issued by DFO, over 69,000 chinook were estimated to be caught, including 23,224 for the Somass First Nations, 1,103 for Maa-nulth treaty nations, 11,224 for the commercial Area B seine fleet, 15,838 for Area D gillnet boats, 16,983 to be caught by recreational boats and 638 taken by a test vessel.

“It’s a chess game in movement all the time around numbers and around openings and closings,” noted Rolston.

“You don’t want to fish on top of another group,” added Murrell. “You want to make sure that the rec boats have safe passage in and out of the marina during their busy times.”

The early-season price was $6 a pound, which lowered to $3 by the end of the chinook season. The market is affected when Alaskan chinook become available.

Ninety per cent of the chinook caught in the Somass River and Alberni Inlet originated from the Robertson Creek Hatchery, a facility by Great Central Lake, where many of the salmon are destined to return to die at the end of their multi-year migration to and from the Pacific Ocean.

These hatchery-raised chinook have the same genes as their wild-born counterparts, but they have the advantage of being released into rivers and estuaries at a larger size. Naturally born chinook usually enter the calm, nutrient-rich waters of estuaries weighing 0.5 to one gram, while the hatchery salmon are released at 4-8 grams, explained Jim Lane, deputy program manager for Uu-a-thluk.

“We don’t really know what happens in the first three or four months of their life,” he said of the species. “We assume a lot of the mortality happens in that time.”

“It’s a hatchery system, and that’s what’s keeping it going in the valley,” said Murrell of fisheries in the Port Alberni area.

Fisheries managers are observing that chinook are coming into the Somass smaller than they were a generation ago. Lane has seen hatchery raised salmon return younger that those born in the wild.

“The age of fish when they return is generally younger than if it was a wild population,” he said. “You see a higher proportion of three-year-olds than you would see in the wild.”

But a number of other factors could be affecting the size of the fish, including ocean conditions that have brought higher temperatures in recent years.

Rolston also noted that commercial nets could be bringing in more large salmon, which can be sold at a higher price.

“Over the years people cream off the bigger fish because the TACs are a piece-count, but you get paid by the pound,” he said. “Area D, for example, wouldn’t want to end up with a lot of small fish.”

Despite the 30 million eggs that fisheries managers expect will be deposited in the area’s rivers this year, Murrell admits that there is yet to be a “smoking gun” that reveals why more of the chinook born in the wild aren’t surviving to return.

“We have to figure out why we’re not getting that production before the next steps of what can we do to increase it,” he said.

“Why they’re not surviving now, while they did up to the early 90s, we don’t know,” said Lane. “That’s one of the things we’re trying to figure out.”

Meanwhile the future of the Area 23 fisheries, and how its salmon will be produced, rests on how much of a dependence will be placed on breeding fish in a facility.

“Are you going to have a river that’s predominantly going to be for enhancement fisheries, and the others are going to be more wild? Or are they managed to maintain a high percentage of natural influence?” asked Lane. “Those are societal questions.”

The chinook fishing season might be almost over, but the salmon will continue to migrate up the Somass River into the autumn, benefitting from cooler water when rains begin and the summer heat subsides. As many as 13,000 have been known to pass through the river in one day, said Murrell.

“Chinook are powerful swimmers,” noted Rolston. “Once they get adjusted to fresh water, and that doesn’t take long, they can boogie many, many kilometres in the run of a day if they wish to push through.” 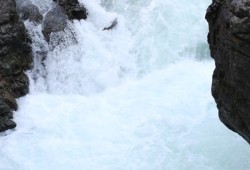 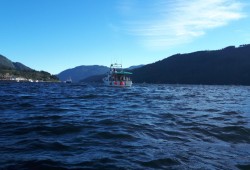 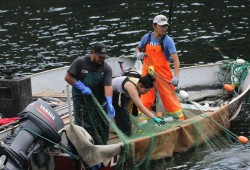 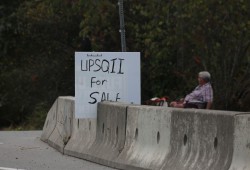