Brought over in the bilges of ocean freighters, the crab species originated from Europe, but has reached 265,000 that were caught in Clayoquot Sound. (Coastal Restoration Society photos)

The biggest threat to wild salmon you’ve never heard of. That’s what the Coastal Restoration Society calls the invasion of the European Green Crab in Pacific coastal waters.

“Invasive European Green Crab are being found up and down the West Coast in larger numbers than ever. These crabs outcompete native species and destroy sensitive and ecologically important habitat,” they say.

With funding from the British Columbia Salmon Restoration and Innovation Fund, a partnership was formed between the Coastal Restoration Society, BCSRIF, Fisheries and Oceans Canada, Ahousaht, Tla-o-qui-aht and T'Sou-ke First Nations to begin work to tackle the problem. Together, they have launched a project to study industrial trapping as a way to mitigate the impacts of European Green Crab on the West Coast of Canada.

European green crabs are a small, invasive species that are voracious predators of clams and juvenile Dungeness crab. They quickly destroy eel grass beds that serve as habitat for young salmon. They have been present on the Atlantic Coast of North America for more than 200 years but have only been on the west coast Vancouver Island for about 20. It is believed that they arrived on the Atlantic coast in the bilge waters of trans-ocean freighters.

Crysta Stubbs of Coastal Restoration Society says the European Green Crab showed up in San Francisco, California in 1989. They believe larvae-infested seaweed used to package seafood from the Atlantic coast was improperly disposed of and, over the years, the larvae floated on the current north, up to Vancouver Island. It was 1999 when the invasive species was first detected on the island’s west coast.

Local seafood harvesters in the Sooke Basin and Clayoquot Sound have been finding the crab on beaches and in traps, killing them as they find them. It wasn’t known how bad the infestation was, until the pilot trapping project began in November 2021.

According to Stubbs, two teams of workers began trapping the invasive crab last November. One team works in Sooke Basin and the other in Clayoquot Sound with Ahousaht and Tla-o-qui-aht people. She said the teams of three or four people set 40 traps in four Clayoquot Sound sites over five days a week.

“The number one goal is removal of the green crab, but we are also collecting data,” said Stubbs. This is the first-of-its-kind attempt to control the green crab through industrial, commercial-scale trapping.

Workers, mostly local First Nations, also monitor the health of the eel grass beds as they work. They count the crab as they pull traps and euthanize them by freezing them.

“And that was supposed to be a bad time for green crab,” said Stubbs. In the first two weeks they trapped nearly 9,000 green crab in the Tranquil Inlet estuary.

“Tla-o-qui-aht First Nation has really lush crab grounds, large fans of eelgrass and mudflats, a lot of great habitat,” said Saya Masso of Tla-o-qui-aht. “To have an invasive species that comes in that has less marketability, less meat on the animal itself, is just a negative for everyone in the region.”

Ahousaht’s Tyee Ha’wilth Hasheukumiss, Richard George, said he had no problem signing off on the project, noting his concern that more than a quarter million crabs have already been trapped in Clayoquot Sound.

“They’re everywhere, it’s kind of scary,” said Stubbs. They pulled 10,000 green crabs at the Cypre River estuary in one day, making that their highest count in one day.

But Stubbs says that the work that they’re doing has had a positive impact.

“The numbers are definitely coming down…Cypre went from 10,000 green crab caught in a day to 2,000 in one day, in a recent count,” she noted. “This is something that’s not going to go away, it’s not possible.”

The trapping program only has funding to run to spring 2023 but Stubbs hopes federal funding will be extended to continue the work. Ultimately, she hopes that a program like this can grow and, with coordinated efforts, reduce the green crab population on the Pacific coast in both Canada and the US.

If not, Stubbs says we can expect to see negative impacts on eelgrass beds, which are important habitat for the already struggling salmon and herring stocks. In addition, the green crab will negatively impact Dungeness crab, clams and other bivalves through predation.

The European Green Crab have no economic value. The 265,000 green crabs caught in Clayoquot Sound are being stock piled in freezers. Stubs hopes that they can be composted and used as fertilizer but there are concerns that need to be addressed before that can happen. `

Stubbs says the Coastal Restoration Society is always on the lookout for funding to keep the project going. They hope that with their work and data collected, European Green Crab numbers will be decreased to the point that the ecosystem can function normally.

“This project needs to be collaborative and widespread as possible in order for it to be successful,” said Stubbs. 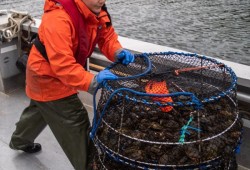 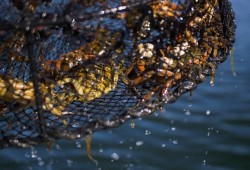