One day prior to the National Day for Truth and Reconciliation, Nuu-chah-nulth Tribal Council staff organized a walk to to show Port Alberni's vulnerable populations they are not alone. (Eric Plummer photo)

One day prior to the National Day for Truth and Reconciliation, also a day recognized as Orange Shirt Day, orange fills lower 4th avenue as Nuu-chah-nuth walk through Port Alberni’s vulnerable neighborhoods handing out orange T-shirts.

John Gomez, the Quu’asa coordinator for the Nuu-chah-nulth Tribal Council’s Teechuktl Quu’asa program, said the effort was to show the at-risk population that there are resources and support for them, and that they aren’t left behind.

It was reported that last year’s 24-hour homelessness count in Port Alberni found that individuals who identified as Indigenous made up 65 per cent of the total.

Jamie Richmond, Youth Outreach Worker for Nuu-chah-nulth Tribal Council (NTC) Harm Reduction Program, says it’s important for individuals in these vulnerable neighborhoods to know that the National Day for Truth and Reconciliation and Orange Shirt Day is for them too.

September 30th marks the National Day for Truth and Reconciliation and Orange Shirt Day. The streets will fill with orange to recognize the harmful and ongoing impacts of residential schools and colonization.

“It's important to also recognize that all Nuu-chah-nulth people, and Nuu-chah-nulth related, have been affected by contact, colonization, and the whole process of assimilation. Which is the whole thing about orange shirt day; how residential schools have such a huge impact on our Nuu-chah-nulth population,” says Gomez.

Cherie Elliot, resolution health support worker, says the impact of residential schools is that many Indigenous people are on the streets battling similar traumas.

“A lot of our Indigenous people may have not attended residential school, but they're impacted by it because of their parents, their grandparents, [and] all the survivors,” said Elliot.

Historical trauma, also known as intergenerational trauma, is experienced by a group of people with a shared identity, and can be passed down through generations.

Elliot says that August and September are difficult months for former residential school students because this is the time of year they would be taken from their homes.

“Today we just want positivity and be able to walk for them, walk with them whatever they may need for that day,” said Elliot.

“It's generational. The effects are felt even in young youth today who did not attend, but maybe their grandparents did, or even their parents. It wasn't that long ago,” Richmond said. “Whether they recognize it or not tomorrow, on September 30, it does, it affects them. So just bringing awareness to days, like tomorrow, and the walk is super, super important, not just for survivors, but for [all] families.”

Kim Erickson, a youth outreach counsellor, says that traditionally homelessness was not experienced among Indigenous culture.

“Everybody had a role and everybody had a place and even the people who couldn't contribute as much as others, they were still part of the circle – the sacred circle of our community and they belonged,” Erickson said. “Now we have so many people that feel they don't belong. And they're out here on the streets and they do feel alone… That is all directly an impact of colonization and genocide that has happened to our people across this country, Canada.” 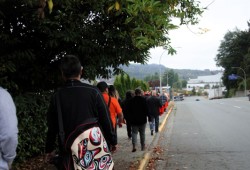 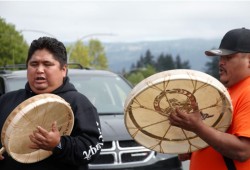