Motor Vehicle accidents are a common sight on the 3.3km stretch of Highway 4 that cuts through Tseshaht First Nation's I.R.1.

Port Alberni, BC – Highway 4, the east/west connector between Qualicum Beach and Tofino, has been growing and improving over the years, allowing more than 1 million visitors access to the Pacific Coast according to VancouverIsland.com – and it cuts straight through Tseshaht’s Indian Reserve #1. They say they were never consulted about the road, nor have they ever received compensation for land taken away from their main residential reserve to build the road.

On October 27, 2022, Tseshaht First Nation issued a statement. “ c̓išaaʔatḥ (Tseshaht) First Nation has recently submitted a Specific Claim with the Government of Canada seeking compensation for the unlawful and unauthorized use of land within the Nation’s Tsahaheh IR 1 (main or principal community lands) for the provincial Pacific Rim Highway 4, which leads to Tofino.”

They went on to say that Tseshaht has always opposed the construction or operation of Highway 4 and has never been compensated for the use of its land.

Elected Chief Ken Watts (Wahmeesh) states that as far back as 1889 Tseshaht leaders wrote letters to the government of Canada stating their opposition to roadways cutting through their reserve. “Despite this, Canada did not take any steps to protect our interests, as they were legally required to do. As a result, the Province of British Columbia proceeded to build the highway, taking our land without our consent,” Watts stated.

The section of highway alienated from Tseshaht’s IR1 amounts to 3.3 km of roadway, shoulders, and ditches. It extends from the Orange Bridge, which crosses the Somass River at the Tseshaht Administration Building, to the Tsahaheh branch of BMO.

Tseshaht say their people have always voiced their concerns about the impacts the heavily-travelled highway has on their people and their territory. “Through increased pollution, garbage waste transportation and vehicle accidents that disproportionately impact Tseshaht members,” they stated.

There have been many accidents on the road. Just last week a Tseshaht girl was struck by a vehicle as she crossed the highway at a marked crosswalk near the Orange Bridge. The girl is okay.

Former Tseshaht elected Chief Hugh Braker recalls a time about 40 years ago when one of their members, Darlene Watts, called Hupacasath Ha’wilth Hugh Watts to join in a protest of the highway. According to Watts, they set up their lawn chairs on the highway and blocked traffic.

The protest, said Braker, slowed the traffic to one lane and the police eventually arrived, telling the pair to move off the road. According Braker, Darlene Watts responded, “Why the hell should we move? It’s our land!”

The western end of Highway 4 to Tofino is relatively new, opening as an industrial logging road in 1959. But the road cutting through Tseshaht territory has been in existence since the late 1800s as settlers went through to get to their lakeside homesteads or workers headed to the logging camps.

The eastern end of Highway 4, from Qualicum Beach to Port Alberni, was built in 1942 and was originally called Highway 1A. It was re-designated Highway 4 in 1953.

In 1959, a rough logging road was pushed through Sutton Pass, connecting Port Alberni to Tofino and Ucluelet in the west. It was paved in 1972, opening the door to ever-growing numbers of tourists traveling to the west coast.

In a move toward reconciliation with Canada’s First Nations, the federal government introduced the specific claims process that aims to address a long history of colonialism and the scars it has left by righting past wrongs.

Tseshaht filed their Specific Claim in late October 2022. According to Braker, the government can take up to six months to review the claim. If it meets criteria, they have three years to negotiate the claim.

If negotiations go ahead, Watts anticipates that a value will be placed on the Tseshaht land taken up by the highway. He said Tseshaht would agree to hear expert opinions on current market value of the land and maybe compensation for extracted resources, like trees, harvested from the land when the road was being built.

“We encourage Canada to expedite its review and acceptance of this Claim so that we can get on with the work of righting this historic wrong,” said Wahmeesh (Ken Watts). “Meanwhile, our Nation is open to a separate conversation with the Province of B.C. about its role in the future of this roadway on Tseshaht land to better protect our people now and in the future and keep them safe from the damage it continues to cause,” he added. 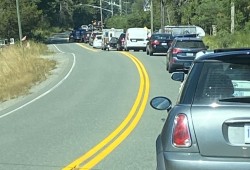