Murray Rankin, minister of Indigenous Relations and Reconciliation, speaks at an announcement for the Oomiiqsu Mother Centre, as Huu-ay-aht Councillor Edward R. Johnson listens at the Port Alberni Lawn Bowling Club on Nov. 8. Construction on Oomiiqsu commences in early 2023, offering transitional spaces and supports to keep mothers and children together (Eric Plummer photos)

In an effort to keep more Indigenous children out of the foster care system, a transitional living facility is coming to Port Alberni to support mothers and their young ones.

For years the Huu-ay-aht First Nations have been working on developing a mother’s centre to better support those struggling with addiction, mental health challenges, abuse, poverty or other trauma that can interfere with parenting. Now such a facility is approaching realization, with a $5-million commitment announced by the B.C. Ministry of Indigenous Relations and Reconciliation on Nov. 8 to cover the centre’s initial operating costs.

BC Housing has invested $10 million into a 17,900 square-foot, two-level facility capable of housing up to a dozen mothers and their children in separate units, complete with a day care and offices for the Huu-ay-aht’s Child and Family Wellness Department, which will run the centre with around-the-clock staff. Construction is expected to begin as early as January, and operations are scheduled to begin by the summer of 2024.

Modelled after the Vancouver Aboriginal Mother’s Centre that opened in 2002, the Port Alberni facility will be called Oomiiqsu Mother Centre, using the word for mother in Nuu-chah-nulth.

Other funds for the project include nearly $800,000 from the B.C. Ministry of Education and Child Care and $1.4 million from the Huu-ay-aht First Nations.

“This partnership between the province and the Huu-ay-aht First Nations will make an important difference on the West Coast of Vancouver Island, where many communities are remote and provide few options for mothers and their children in need,” said Murray Rankin, minister of Indigenous Relations and Reconciliation, who spoke at the mother centre announcement in Port Alberni. “At Oomiiqsu, they will find stability, security and access to support in a way that works specifically for the Nuu-chah-nulth people.”

The announcement was emotional for several who spoke at the event, as the Huu-ay-aht have worked to improve a social issue that brought about a public health emergency for the First Nation in March of 2018. At that time 21 per cent of Huu-ay-aht children were in the foster system, but the 47 youngsters who were in care at the time have since declined to the current level of 18-22, said Huu-ay-aht Councillor Edward R. Johnson. He pointed to work the First Nation has undertaken to implement recommendations of the Social Services Project. Informed by a panel of experts tasked to investigate the large number of Huu-ay-aht children in foster care, the project relied heavily on input from Huu-ay-aht citizens.

“The movement of change is wonderful see, in knowing that change takes time,” said Johnson during the mother centre announcement. “In being able to enforce reconciliation - to be able to slow that momentum of colonialism - it’s an uphill battle.”

While the public health emergency was declared four and a half years ago, a young Huu-ay-aht mother was fighting in court for access to her newborn. The baby was removed by the B.C. Ministry of Children and Family Development from the mother while in a Victoria hospital just three days after birth. The newborn was put in the care of the paternal grandmother in Courtenay, while the 20-year-old mother, who lived in Port Alberni, was limited to two hours of access a day. Contact was not granted on weekends, as ministry staff were not available to supervise the visits.

But by mid March a Provincial Court order reunited the mother and newborn, after supports from family and the Huu-ay-aht helped the case for the baby to live with the young woman.

But while the number of B.C. children currently in foster care has declined to nearly half of what existed 20 years ago, Indigenous youngsters have not kept pace. As of 2021 Aboriginal children comprised 67 per cent of those in care, according to the Ministry of Children and Family Development.

At the mother centre announcement Josie Osborne, MLA for Mid Island-Pacific Rim, spoke of the goal “to turn the corner from a very dark history of separating children from families and culture, to one that is more generous, more humane in a culturally aligned way of keeping children and families together.”

“I’ve done hundreds of announcements in my riding in my seven years. I haven’t been to anything more important than today,” added Courtenay-Alberni MP Gord Johns. “This project is going to save lives.”

Johnson said that Oomiiqsu is designed to prevent the traumas that many families have had to endure by providing a transitional home “where mothers and children will feel safe, healthy and connected.”

He shared that his mother would have benefited from such a place to help with her struggles when he was young.

“I have my mom to thank, because she’s my hero. It was her words that helped push me forward,” said Johnson. “Knowing that my mom and I could have benefitted from a mother’s centre; my cousins, my sisters, my aunties and uncles could have benefitted from Oomiiqsu. It’s not just Huu-ay-aht that’s going to benefit from Oomiiqsu Mother Centre, [but] all of Nuu-chah-nulth.” 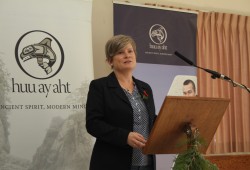 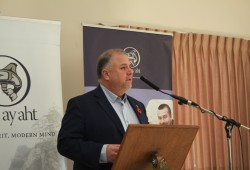 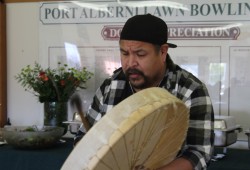