John Jacobson stands in Ahousaht, shortly before he headed overseas to serve in World War II. The photograph of the young man was taken at the Ahousaht General Store during the two-week period when he was home before joining the war.

“When you are a knowledge keeper you gotta share it at every opportunity, and don’t expect anything back except maybe a cup of tea,” John ‘Smitty’ Jacobson advised his nephew, Dave Jacobson before his passing in 1986.

John Jacobson was born September 16, 1922, to George and Nellie Jacobson of Ahousaht. From an early age he was taught to be a knowledge keeper and he collected as much information as he could, from family genealogy, cultural teachings and songs to art and classical music.

While John was married to former schoolteacher, Joan, he never had his own children. He shared his knowledge with anyone willing to listen, many times with his nieces and nephews.

According to Dave, his uncle John chose to enlist in the Canadian Army at a young age.

“He did his training somewhere on the mainland, the prairies,” said Dave.

When he was done training he was given two weeks to go back home before shipping out to Europe.

“I guess they were sending them home to say goodbye to their families,” Dave speculated.

The photograph of a young John Jacobson in uniform was taken at the Ahousaht General Store during that two-week period when he was home.

Instead, John had two trusted friends that would take his late-night or early-morning calls.

According to Dave, he’d make those calls and talk about his experiences and the trauma. Those friends were the late George Watts of Tseshaht and a trusted friend from Hupacasath.

“There would be no goodbye, when he was done talking, he would simply hang up the phone. When the phone went dead, that’s when they knew he was done,” said Dave.

While Dave was never told about what his uncle went through, he acknowledged that there was some trauma. Back then, he said, there was no emotional supports in place for war veterans. Many turned to vices and addictions to cope – and for his uncle John, it was alcohol.

“He could go many months without drinking but when turned to alcohol, he could go for days,” Dave remembered.

He believed it was during those binges that his uncle was reliving and feeling his pain.

“Then he’d sober up and he’d be good for a while,” said Dave.

Indeed, there were far more good sides to John Jacobson than bad. He was an artist that carved small totem poles. The carving that hangs above the entrance to Maaqtusiis School in Ahousaht was made by John along with his friend Ron Hamilton in 1986.

“He wasn’t as much of a carver as he was a sculptor,” said Dave.

John saw sculptures of angels while in England and incorporated those designs into his carvings of eagle and thunderbird wings.

John was born in a time where it was important to commit to memory the things he learned, from family history to songs. He was the first one in Ahousaht to own a recording device. It was a reel-to-reel tape recorder that he used when he spoke to elders.

“He talked to elders a lot about mułmimc, family roots. No matter where he went on the coast, he could always tie people back to Ahousaht through their family roots,” said Dave.

In addition to his genealogy knowledge, John amassed a huge collection Nuu-chah-nulth songs. The tapes that he made of oral histories and songs are now at the Royal British Columbia Museum archives.

“Anybody can access them…late (Dr.) George Louie transcribed a lot of the tapes. His notes are on yellow legal pads at the museum,” Dave shared.

When John got back from the war, he and his fellow Ahousaht veterans were no better off than they were before they left. While mainstream veterans were given tracts of land in exchange for their service, Aboriginal war veterans were given certificates of possession for parcels of land on reserve, something they already had a right to as Ahousaht members.

According to Dave, Phillip Louie, Frank Williams and John Jacobson were given certificates of possession for land on reserve in Ahousaht, but away from the main village at the time. Williams traded his lot for one in the village while Phillip Louie gave an elder couple permission to build on his lot.

“The lots were too far away from the village for them to use,” said Dave.

Today, those parcels of land are along the shoreline, starting from Mattie’s Dock to a small house that belonged to Winona Thomas and her husband. The village has grown up around the lots.

Another difference in the treatment of Indigenous war veterans was access to grants to get started in life. Most veterans got grants but Indigenous veterans were offered loans, according to Dave.

“Uncle borrowed money to buy a fishing boat and he had to pay it back,” he said.

But John didn’t let anything hold him back. He took what he learned from abroad and brought it home to Ahousaht. He was one of the first Ahousahts to attend university, spending a year at the University of Arizona.

"He always sought knowledge and though he never had children of his own, he always talked to me,” Dave recalled.

“You gotta share it at every opportunity and don’t expect anything back…be grateful that you have the ability to share these things,” John told Dave. “So that’s what I do today, share what I know.”

For his many contributions to the preservation of history and his service in the military, John Jacobson was honored by Nuu-chah-nulth-aht and the Canadian Coast Guard when a new CCG patrol vessel John Jacobson was named in his memory back in 1991.

John’s wife, Joan, was there with Jacobson’s family and friends for the CCG dedication ceremony back in 1991. Joan passed away in Port Alberni in 2020.

The CCG vessel John Jacobson was stationed in Esquimalt and was in service until 1999, when it was sold and renamed Coriolis II. It is now in Quebec.

Dave said that the Jacobson family were grateful to the NTC and the Government of Canada for the honor bestowed upon their uncle, acknowledging that he and his contributions were important. 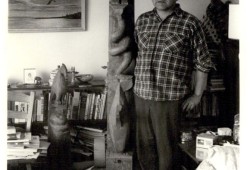 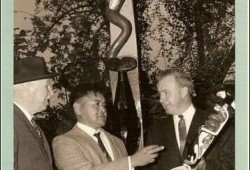 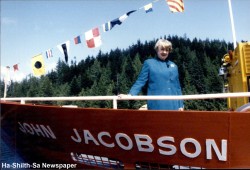 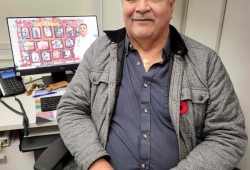