Considered “the most harmful form of debris to sea life”, the DFO plans to improve the reporting of lost and discarded fishing gear in the coming years, with millions set aside for collecting equipment left from commercial operations.

Termed “ghost gear” by Fisheries and Oceans Canada, this equipment is often lost due to rough weather, snags below the surface, or fishing lines being cut during marine traffic. The DFO sees ghost gear as “a major threat to healthy fisheries and fish stocks,” according to a presentation given in late October to the Nuu-chah-nulth Council of Ha’wiih Forum on Fisheries.

The remains of commercial operations are considered a major threat to aquatic life globally as well. The United Nations estimates that 600,000-800,000 tonnes of lost and discarded fishing equipment enters the ocean each year. Ghost gear is responsible for up to 30 per cent of fish population declines, according to the USA’s National Oceanic and Atmospheric Administration.

“The concern with ghost gear is that it can remain fishing even after it’s lost,” said DFO biologist Kevin Conley, who delivered the presentation to the Council of Ha’wiih on Oct. 28.

Over the last two years a ghost gear fund managed by the DFO has supported the collection of 157 kilometres of rope across Canada, part of 2,911 units of equipment recovered, thanks to the $16.7 million in federal support. In the Pacific this has funded 603 sea and shoreline sweeps, including the cleanup of derelict fish farms. On the west coast of Vancouver Island the Coastal Restoration Society attended to nine abandoned aquaculture sites, collecting over 100,000 kilograms of debris, including rope, wood, metal and plastic barrels.

Canada’s budget for the 2022-23 fiscal year includes another $10 million to fund the collection of ghost gear. With 43 new cleanup projects underway, the Coastal Restoration Society secured another $600,000 in federal funds to support its operations. The CRS survey work “will be guided by First Nations partners and will prioritize sites of high cultural, food, social and ceremonial importance,” states the organization’s project description submitted to the DFO.

In recent years Ahousaht has worked closely with CRS, which has conducted cleanups in Warren Bay, Oyster Island and the harbour by the First Nation’s village on Flores Island.

“Our Ahousaht divers who have gone through our program are now letting us know it’s now time for another cleanup of the harbour,” said Hasheukumiss, son of Ahousaht Tyee Ha’wilth, during the October fisheries forum.

The Rugged Coast Research Society is also working in partnership with First Nations, removing gear from subtidal areas of Hesquiaht and Ka:'yu:'k't'h'/Che:k'tles7et'h' territories. With almost $200,000 from the federal fund, Rugged Coast is using remotely operated vehicles to find ghost gear.

“The subtidal surveys will locate ghost gear, such as crap traps, lines, sunken floats, and any other objects that pose a threat to the marine habitat and sea life,” describes the RCRS. “Following the survey work, a skilled team will be employed to collect, remove and transport prioritized ghost gear for disposal and recycling.”

Since 2019, federal regulations have required commercial fishers to report lost gear to the DFO, a system can enable the equipment to be returned to its owners after retrieval. Over the next five years the federal department plans to improve this reporting system, enabling the DFO to have a detailed map of sites where equipment has been lost in the ocean. Priority regions in the Pacific are Clayoquot Sound, the Alberni Inlet and the southern Salish Sea.

Additional capacity for the recycling of ghost gear is also being supported, including $626,767 awarded this year to the Ocean Legacy Foundation for centres that process plastics, polystyrene, rope, tires and nylon nets.

The retrieval of ghost gear is managed by Canada’s Wrecked, Abandoned or Hazardous Vessel Act, legislation that limits retrieval to periods outside of fishing seasons. The act requires a permit to retrieve ghost gear, and collectors must specify the areas they will be exploring and what is found.

“That’s our opportunity to get into the specifics of the actual sites that they’re going to be doing,” said Conley. “That’s typically when we will send a notice to First Nations in the area, notifying them of that planned activity.”

Hasheukumiss stressed the need to make operators accountable for what is left behind, citing several barge loads that had to be removed from his territory after a fish farm tenure ended.

“When we’re looking at people who are having these operations, to make sure that they’re accountable before their departure,” he said.

The First Nation is awaiting approval to remove gear from another site north of Tofino.

“Right in front of our Tofino Wilderness Resort, there’s a couple dangerous ghost gear sites that are derelict now,” said Hasheukumiss. “They’re just under the water line. They were left two years ago. We’ve applied for removal.” 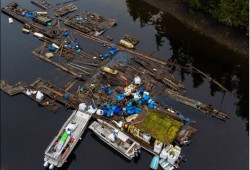 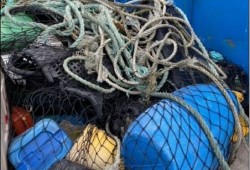