Soon the gym was filled with the sound of drums and song, laughter and conversation. Some children chased each other playing tag while others played with toys and read books.

“It really comes from an old teaching of honoring the life of a person,” said Trevor Little (Nawe-thleet), teacher at Haahuupayak.

“There were stages…as a child grew up that we'd honor their growth, their moments, the transition to another step in their life,” continued Little. “This stuff used to be honored all the time, and so we're honoring their arrival right now.”

“We call our children ‘usma’, and that means precious,” said Lena Ross (Nasgaadan), another teacher at Haahuupayak. “We need to treat them in that way, in everything we do.”

Ross said that it’s important to gather in community events to teach children that their community is behind them, cares about them, and supports them.

“We have such an investment in the future generations,” said Ross. “It's a real investment”

Throughout the gymnasium community services were set up for families. Infant massage was provided by the Nuu-chah-nulth Tribal Council Children and Youth Services department, the Literacy Alberni Society provided books for little ones through to the teens, Pacific Rim Children and Families brought books and toys, and Pacific Care Family Enrichment Society was set up too.

“It's well overdue, and it's nice to be able to get together,” said Gus. “Learning about what songs that we can have, that we can sing to her babes.”

Michelle Colyn from the Gallic family said that it’s important that her children know their family roots and connection to Tseshaht.

“[It’s important] that they have a sense of belonging in this,” said Colyn. “Over the past couple of years, the pandemic, it's been tough not having all the access to the cultural events we may have participated in.”

As the event began the mothers and female guardians were led in the construction of cedar headbands, while the fathers and male figures were led through the making of a drum. These were gifted to the children.

“The drum is our heartbeat,” said Gus. “Cedars are strength, and the women are our strength.”

After the drums and cedar headbands were completed, Trevor Little and the male figures made their way to the longhouse, where they would wait for their families. Little spoke to the group about commitment to their families, and the type of parent they want to be for their children.

Little said the female and male circles were to honor both spirits in the child.

Once the mothers and children arrived in the longhouse, family by family, according to traditional practice the fathers and other related male figures would give their children the drum they made, declaring their intentions and hopes for their young ones, surrounded by witnesses.

Little said that it’s beautiful to witness the promises made by participating families.

“When I watch him now, hold his baby over there, it’s different, it feels different,” said Little.

“My hopes for those children are that they’re grounded. They’re grounded in their culture [and] they know where they belong,” said Ross. 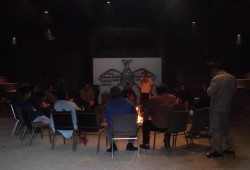 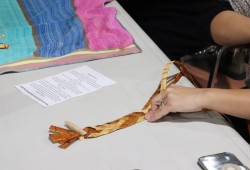 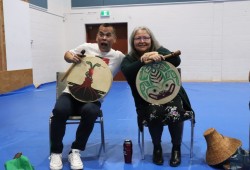