The prevalence of homelessness on Victoria’s Pandora Street has led front-line workers to describe the area as a miniature version of Vancouver’s Downtown Eastside. (Eric Plummer photo)

It’s been more than two years since the last official homeless count in Victoria, and Herb Dick, an Indigenous outreach worker from Ahousaht, believes the number of Aboriginal people living in the streets is increasing - even in the face of weekly losses due to street drug overdose deaths.

“I don’t know the number but there’s been a real growth in tents, some people just in blankets and under tarps,” said Indigenous Outreach Worker Lacey Jones.

It has been more than two years since the last official Point-in-Time Homeless Count in Victoria.

According to Jones, the IOW team is made up of about 15 Indigenous people from all over the island who deliver support and supplies to approximately 90 Aboriginal people per week in Victoria. The IOWs come from several different non-profit societies and from Island Health.

The group meets every couple of weeks to coordinate their work and to plan for cultural events.

“We try to reconnect people with their foods, especially seafood,” said Jones.

She told Ha-Shilth-Sa that she is grateful to the Songhees for offering up free meals like fry bread and soup to warm the people in the frigid winter conditions.

In addition to the generous contributions from the Songhees Nation, the service agencies rely on donations and are always on the lookout for seafood.

“We brought out packs of smoked fish for the people and are jarring sockeye to give away,” she added.

The IOW worders deliver food and supplies on Pandora Street and also visit encampments to check on the people and provide support to them.

“We have a pop-up tent on Pandora two days week,” said Jones, adding that they deliver harm reduction supplies, hot or cold drinks, clothing and food.

On other days of the week they visit the various tent communities around the city, delivering the same service and checking in with the people there.

“Each site has five to 10 First Nations people living there,” said Jones.

She is proud of the cultural reconnection component of their work.

“So many of them are our relatives, we treat them as aunties and cousins,” she said, adding that they gain strength from culture.

In addition to the monthly seafood gatherings, elders come in to drum or to provide a friendly ear. Jones said she is grateful that Guy Louie Sr. and Helena Sam, both Nuu-chah-nulth elders, are always willing to come downtown to share cultural teachings.

“People on the street are often disconnected with their culture,” said Jones.

But the weather went from summer conditions to freezing temperatures very suddenly this year. In early November the first snow of the season arrived in Victoria.

“We’re missing winter shelters,” said Dick, noting that spaces at the Victoria Native Friendship Center and other places were not yet open when the cold snap hit in early November.

“They say there’s been more funding but it doesn’t seem that way,” said Dick, adding that there were no seasonal shelters opened in the city Nov. 8. “That’s pretty troublesome now that we’ve had our first snow.”

Changes in how Victoria’s Extreme Weather Response Plan is enacted has caused delays this year. In previous years a regional coordinator, hired by the Greater Victoria Coalition to End Homelessness, was responsible for determining when weather conditions met the threshold to activate an Extreme Weather Response. This year the position is vacant.

In 2022 Emergency Management B.C. will still fund the daytime centres, but B.C. Housing now has responsibility for the overnight ones. For now, Victoria’s emergency program co-ordinator, Tanya Patterson, in consultation with service providers, shelters, Victoria police and others will be responsible for activating the city’s Extreme Weather Response.

Jones said that folks prepared as well as they could for the snow.

“They’re in survival mode. They’re asking for tents. They’re trying to figure out if emergency shelters are activated,” said Jones.

Both Dick and Jones acknowledged that the provincial government has opened up low barrier housing units when they purchased former motels, but Jones says they are barely liveable, and some people choose not to stay there.

She estimates there are about 300 to 400 people living in Victoria’s streets, not all Indigenous.

“What is needed, funding,” said Jones, stressing the need for core support for these kinds of programs and staffing.

“It’s hard to chase funding every year,” she said, adding that there is a need for more culturally safe housing.

Currently, there are no supportive places for those returning from treatment or detox.

“They go back to a place where their neighbors are using,” said Jones.

She pointed out that many subsidized housing spaces don’t allow guests.

“We sit with our family, we visit,” she said.

More cultural programing would allow them to reconnect with their roots and strength if they choose to get off the streets, she added.

Indigenous people are stigmatized for being homeless, addicted, and then again for being Indigenous, Jones noted. Having First Nations support staff makes them feel safer.

“People need a home so they can start healing work,” he explained. “We’re being reactive, as First nations people. We need to focus on being more proactive, look to next year, to have someone here to help our people.”

He noted that there’s IOW workers but said it’s still just a drop in a bucket for what they need.

Dick says that he has reached out to the First Nations and to the NTC, raising awareness about the number of Nuu-chah-nulth people living on the streets of Victoria. “I never got a reply,” said Dick.

“I think more needs to be done. Some of the larger tribes come here to look around and feed their people,” he added. 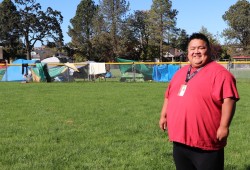 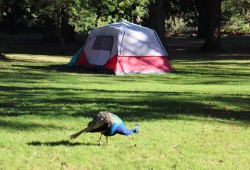