While Justin Trudeau addresses COP 15 at the opening ceremony, members of the West Coast Youth Collective hold a sign reading, “Indigenous Genocide equal ecocide, to save biodiversity stop invading our lands, colonialism can’t save you”. (Photo provided by Aya Clappis).

Dec. 7 marks the beginning of the United Nations Biodiversity Conference.

COP 15, Conference of the Parties, is being held in Montreal, the unceded territory of Kahnawake Mohawk First Nation. Governments from countries around the world will come together to negotiate and create a new framework of goals and strategies, known as the Post-2020 Global Biodiversity Framework, to minimize biodiversity loss and preserve nature. These goals will then be carried into the next decade of conservation work throughout the 196 countries involved.

According to Global Risks Report 2022, the top three threats for the next decade on a global scale are climate action failure, extreme weather, and biodiversity loss.

The document indicates that 10 per cent of biodiversity risk mitigation efforts have not started, 67 per cent are in early stages, 21 per cent are established, and only two per cent are considered effective.

It defines “biodiversity loss and ecosystem collapse” as “Irreversible consequences for the environment, humankind, and economic activity, and a permanent destruction of natural capital, as a result of species extinction and/or reduction,” the document reads.

As the convention begins Montreal, Aboriginal voices take the forefront at the International Indigenous Forum on Biodiversity press conference, discussing the intertwined connection of biodiversity conservation and Indigenous ways of being.

Lakpa Nuri Sherpa, co-chair of International Indigenous Forum of Biodiversity and program lead at Asia Indigenous Peoples Pact, said it’s important “to look [at] Indigenous peoples as rights holders, as leaders, and also as partners to conservation of all the discussions that we are having.”

“It’s very important for the Post 2020-Global Biodiversity Framework to really enhance this relational value of nature and peoples together with the culture,” he said. “There are so many… good practices [and] the customary traditional values that Indigenous peoples are doing all over the world that are the very key to the problem we are discussing in the [Convention of Biodiversity].”

Canada’s conservation efforts continue to align with conserving 30 per cent of land and ocean by 2030.

“Again, the science here is clear, 30 per cent is the minimum necessary to address the biodiversity and climate crisis. It’s a floor, it’s not a ceiling,” said Steven Guilbeault, Canada’s minister of Environment and Climate Change, in his opening remarks. “The world's largest countries, geographically, such as Canada, are critical in this effort, and we are committed to play our part.”

In the closing remarks of the International Indigenous forum for Biodiversity Press Conference, Chrissy Grant spoke about Indigenous peoples around the globe who are concerned about the 30 by 30 framework.

“I think we need to be really clear about what that 30 by 30 is about, what it means when we say 30 per cent protection of land and waters,” she said. “It needs to have careful consideration by parties at this meeting to identify and define what that 30 per cent means.”

Attending the conference is the West Coast Youth Collective with delegates from Tla’amin, Homalco, Gixstan, Dene, Musqueam, and Huu-ay-aht.

Aya Clappis of Huu-ay-aht First Nations is part of the collective. They have been involved in youth-based activism that advocates for Indigenous rights, land, and water.

“I will be attending meetings, marching in demonstrations, building art, and connecting with international as well as local Kahnawake youth,” wrote Clappis in an email to Ha-Shilth-Sa.

Clappis said that members of the West Coast Youth Collective are at the conference advocating for Indigenous rights, a livable future, for forests, and water. These are all important because they are tied together by salmon, which is presently at risk due to industry and climate change, Clappis said.

“It was really important for us to come as a delegation because Indigenous people are traditionally excluded from these spaces, or have been historically,” said Clappis.

Clappis said that the collective’s delegates are bringing issues that are happening on their territories to politicians, policymakers, and scientists at COP 15. They stand for solutions to issues regarding biodiversity loss and climate change that are far more than policy, nature-based solutions, and frameworks, they continued.

“These nature-based solutions, which are rooted in the commodification of our lands, are not the answer and policy can't simply be the answer,” said Clappis.

The West Coast Youth Collective will be participating in two panels: Biodiversity = Land Back: Reawakening Indigenous Sovereignty for Biodiverse Futures, and Our Forests are the Frontline: Indigenous Youth Resistance to Industrial Forestry Along the West Coast.

Clappis said they are looking forward to the youth demonstrating, “that we don't necessarily need Western science to tell us what's going on in our land because our people have been in relation to the land for so long that we understand it just by living with the land.” 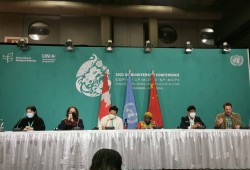