People gather outside the Wintergreen Apartments, where a murder occurred on Dec. 2. The fatal stabbing occurred next to the future site of the Tiny Home Village, which is planned to offer a safer option to an illegal trailer park. (Eric Plummer photos)

A murder in Port Alberni’s poorest neighbourhood has raised the urgency for an upcoming development that will house the city’s marginalized residents.

Just before 9 p.m. on Dec. 2 police found three people injured from knife wounds, with one person who was killed during the incident on Port Alberni’s lower 4th Avenue. Police tape was put up at a unit in the Wintergreen Apartments, a building next to an empty lot full of run-down trailers being rented for low rates.

“We don’t believe there is any risk to the general public, this is an isolated incident,” stated Const. Richard Johns of the Port Alberni RCMP. “Officers from our Major Crime Section spent the night investigating, and will continue until all of the details have been unearthed. All persons involved in the incident are identified and the investigation is under control.”

Charges have not been announced, nor has the identity of the victim, but reports indicate he was set to be moving from the trailer park to a collection of over 30 living units due to be assembled on an adjacent lot. The Tiny Home Village is now expected to be ready to house some of the trailer park residents in mid-February, said Cyndi Stevens, executive director of the Port Alberni Friendship Center, which is managing the development.

“It’s tragic, actually,” said Stevens. “It saddens me to think that this could potentially have been avoided if we had the opportunity to have opened earlier.”

The Tiny Home Village was originally expected to be ready by early October, but municipal code requirements, site planning, as well as construction and shipping delays have pushed back the development. Now the first two units are expected to arrive today late in the afternoon.

Located just half a block from where the fatal stabbing took place, the Port Alberni Friendship Center has pushed forward the Tiny Home Village, which will offer 32 heated living units, each equipped with a bed, mini-fridge, desk and chair. Intended for those in the area who would otherwise be unhoused, tenants can access communal washrooms and showers on the site, with Wi-Fi and support services available that include referral to recovery supports.

Security will also be in place at the collection of modular living pods, as safety has long been a concern in the trailer park and Wintergreen Apartments.

“We’ve always seen it as an urgency anyway, and knew that there were some safety issues in that community,” said Stevens. “There will be no weapons allowed on the property at all.”

She added that staff will be trained to monitor who enters the Tiny Home Village.

“People who are coming in, if they have a violent history, unfortunately will not be considered for the tiny home at that time,” said Stevens. “Safety is primary, and also is knowing that the people that are living there are going to feel safe, and that our staff are also going to feel safe.”

The Wintergreen Apartments and the next-door trailer park lot is owned by Randy Brown, who runs a local property management company. In 2020 Brown brought trailers to the lot next to the Wintergreen after seeing people sleeping outside in the area, charging $375 to $500 a month in rent for the accommodation.

The city has identified the trailer park as illegal, deeming the site unsafe and a violation of municipal bylaws. City council passed a remedial action requirement in November 2020 for Brown to remove them, but amid the reality that the residents will end up on the streets, the trailers remain on the site two years after the municipal order was voted through.

Now the Tiny Home Village appears to be the next option for those residing in the 4th Avenue trailer park, and Brown has stated that the RVs will be removed once there is a safer place for the tenants to go. The city has purchased the property for the Tiny Home Village, committing at least $140,000 for utilities, security and fencing, with the friendship centre leasing the site. A Housing Task Force has guided the development, composed of representation from the friendship centre, the Nuu-chah-nulth Tribal Council, the Tseshaht and Hupacasath First Nations, as well as other local agencies.

In recent years Indigenous people have taken up a growing proportion of Port Alberni’s homeless population. A point-in-time homeless count conducted in 2021 reported that 65 per cent of the city’s unhoused identified as Aboriginal. 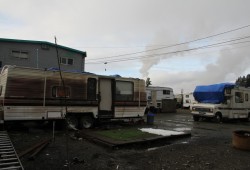 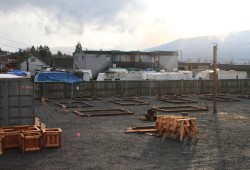