In the running for Totem Spirit, a competition that reflects school spirit, is Sophia Bill of Tseshaht First Nation. Bill is a Grade 12 student at ADSS and a member of the dance team. (Alexandra Mehl photo)

For Alberni District Secondary School, Totem is an annual basketball tournament that rallies ADSS and the broader community together with school spirit.

In the running for Totem Spirit, a competition that reflects school spirit, is Sophia Bill of Tseshaht First Nation. Bill is a Grade 12 student at ADSS and a member of the dance team.

Totem Spirit is a competition of the “ultimate school spirit,” reads the ADSS Totem tournament website. The candidates, representing their respective school teams and groups, assist with the tournament and rally the school together to create the special and cheerful atmosphere that ADSS experiences each year at Totem.

The dance team will be bringing school spirit to Totem 67 with performances between games and at halftime. They will also “cheer on the crowd” and the basketball teams throughout the tournament, said Bill.

Bill is excited about the atmosphere cultivated during the tournament, set to begin Jan. 5.

“You don't really have that anywhere else,” she said.

“I've actually attended Totem my whole life. So, [running for Totem Spirit] seemed like the perfect way to top off my experience at Totem for my final year,” said Bill. “If I didn't do it this year, and I didn't run, I might regret that decision in the future.”

Bill’s family has lived in Port Alberni for many years and has regularly attended the tournament. Her family is also involved in the event: Bill’s mother is the current ADSS cheer team coach, and her father is a former ADSS basketball coach, Bill explained.

“I kind of grew up around it all the time,” said Bill.

Bill said that running for Totem Spirit has been a rewarding experience for her.

This year the dance team is also welcoming many new additions.

“We have a team of a lot of Grade 8s this year,” said Bill. “I think that'll be really cool to see them all experience [Totem] for the first time.”

Bill’s mom registered her in dance at a young age, and ever since then she has been in love with all forms of the art.

“I love it all. Ballet is really… beautiful and I love that,” said Bill. “Tap is really fun, and jazz has so much energy…Jazz is kind of what you're going to see at Totem.”

“[Dance has] taken over my whole life. So, the dance team seemed like just another way to do what I enjoy doing,” she added.

Bill has been on the dance team for five years, and this is her final season.

“Which is kind of bittersweet,” she said. 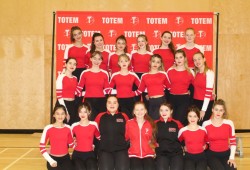