Commercial boats fish on the Alberni Inlet in the late summer of 2022. Fisheries and Oceans Canada is introducing more opportunities to retire commercial licences in order to lesson the strain on threatened Pacific salmon stocks. Multiple rounds of bids to the DFO are expected to be available for commercial licence holders until March 2026. (Eric Plummer photo)

With the aim of thinning out the commercial fishing fleet to lessen its strain on threatened salmon stocks, the DFO has announced another round of licence buy backs, including an upcoming program that encourages First Nations’ communal operations to transition to other species of fish.

Staff from Fisheries and Oceans Canada announced the new initiatives at a technical briefing for media on Dec. 14, a $123-million suit of programs that includes voluntary salmon licence retirements, incentives for communal First Nations licences to transition away from salmon and a plan to dispose of commercial fishing boats. The licence retirement programs are part of the federal department’s $647-million Pacific Salmon Strategy Initiative, a push announced in June 2021 to rebuild vulnerable salmon populations on the West Coast.

According to Canada’s Species at Risk Act, 24 of the Pacific salmon populations are “endangered”, with 10 listed as “threatened” and another seven falling under the “special concern” category. The DFO has blamed this decline on “climate change, habitat degradation, pollution, land and water use, acute events like toxic spills and landslides, and fishing pressures,” according to a Dec. 14 press release.

There are currently approximately 2,030 licences to catch Pacific salmon on a commercial scale, according to Jeff Grout, DFO’s salmon resource manager. Less than 1,300 of these licences are directly eligible for retirement, with the remainder being communal licences, including those shared by members of a First Nation.

The DFO’s aim is to encourage the transition to a “smaller, more financially viable and sustainable fishery for those who remain.”

“More specifically for the commercial fishery, we think that there is far more harvest capacity in the fishing fleet than there is opportunity to catch fish, and this is in part making the fishery economically unviable,” said Neil Davis, the DFO’s regional director of salmon management.

He explained that under the voluntary retirement program licence holders can submit bids for the department to purchase their regulated right to catch.

“The department will view those bids, and make decisions about which bids to accept or not,” he said.  “The purpose of this program is really to support that transition to a smaller commercial harvesting sector that is better aligned with the scope of harvest opportunity in the fishery for the foreseeable future.”

This is not the first time a finger has been pointed at the commercial sector as a threat to stock recovery. One month after the Pacific Salmon Strategy Initiative was announce in 2021, the DFO closed 60 per cent of commercial salmon fisheries on the B.C. coast, with more shut downs the following year. As salmon closures are expected to continue, many in the industry fear that their licences have dropped in market value, thereby lowering the amount that the DFO would offer in the voluntary retirement program.

“We will not be considering licence values from 2021 and 2022, to exclude the potential impacts of those long-term closures on licence valuation,” said Davis in response to the concern.

The voluntary retirement program is nothing new, as the DFO has been buying back licences for decades, and now the commercial fishing fleet is approximately half of what it was in the mid 1990s.

Ahousaht fisherman Andy Webster sold his Area G licence to fish off the west coast of Vancouver Island years ago.

“It was pretty hard to make a go of fishing at the time. I was penny pinching when I decided to sell it,” said the lifelong fisherman. “It was to the point where I fished by myself for four or five years with no crew because it wasn’t viable. I wasn’t able to pay a living wage to my sons.”

That was when Nuu-chah-nulth began their case to fish commercially in their territorial waters, an Aboriginal right that five First Nations had affirmed by the B.C. Supreme Court in 2009. Webster now fishes for part of the year as part of the T’aaq-wiihak rights-based fishery, which the Ahousaht, Hesquiaht, Ehattesaht/Chinehkint, Tla-o-qui-aht and Mowachaht/Muchalaht First Nations participate in.

Hesquiaht fisherman Vic Amos also harvests with T’aaq-wiihak, but is among the few Nuu-chah-nulth-aht who have kept an Area G licence as well over years. Amos recently completed his 50th fishing season, with the help of his two sons.

“We started in the middle of May and we were done by the first week of November,” he said. “But I started to work on my boat in January to get it ready for the season.”

Although the Nuu-chah-nulth have a constitutional priority to access salmon, Amos needs his Area G licence to remain in the industry, as allocations under T’aaq-wiihak aren’t enough.

“If I relied on that, I would not be able to make it from one season to the next,” he said. “There’s not enough allocation to make it profitable. The only way that I survive is that I have other fisheries.”

During the Dec. 14 technical briefing, the DFO staff were asked how the voluntary retirements will not favour larger companies to stay in the industry over family-owned operations that are struggling to make ends meet.

“Whether you voluntarily choose to participate in this program or stick it out, there’s some benefit in some form available to you,” said Davis. “If you want to depart, this licence retirement program offers you payment in exchange for your retirement. If you choose to stay, presumably there will be fishing opportunity that you may benefit from.”

“Based on our data from the last five years, somewhere between 50 to 70 per cent of each or our fleet has been actively participating in the fishery, the remainder has not,” noted Grout. “We do expect there will be some interest in the program from a number of those folks.”

Although it’s being presented as a voluntary buy back, Amos sees the whole process of restrictions, closures and retirements as a means to “starve out” the smaller commercial operators.

“They’ve been curtailing us since 1980,” he said. “They’ll probably just reallocate to a different sector that’s a priority - like the sports priority, that’s a political priority.”

In recent years, Area G commercial allocations for chinook off the west coast of Vancouver Island have been less than what the recreational sector has been permitted to catch, leading some to suspect that the federal government is favouring the sports fishery and the tourism dollars it generates.

“What really bothers me is when they gave the recreation people priority,” said Webster. “I think the whole idea was to kick the whole commercial fleet right out.”

If the commercial fleet continues to thin out, Amos fears losing the coastal infrastructure, like local fish processing plants, that the industry relies on to continue each year.

Another new initiative was announced on Dec. 14 that specifically pertains to First Nations: The Pacific Salmon Indigenous Communal Commercial Licence Alternation Program. This gives Aboriginal groups and communities the chance to exchange a communal salmon licence for funding, which would then be applied towards gaining access to another species. More information and a website are expected to be available in the new year.

“As they will be switching to non-salmon species, they will have other needs in order to make that transition,” said Duncan Stephens, DFO’s director of Indigenous programs. “So there is support contemplated in the program for incremental costs associated with things like gear, modifications or upgrades, vessel modifications, training or other capacity that might be needed to make that transition to non-salmon species.” 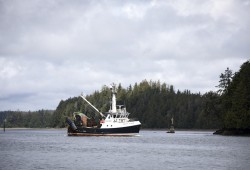 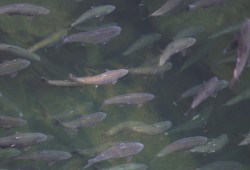 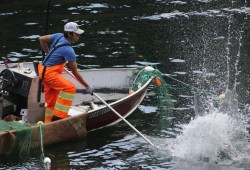 With little to no rainfall occurring over the past five weeks, the west coast of Vancouver…