The Alberni District Secondary senior girls team battled Belmont on Friday, Jan. 6. Belmont took the the game 56-40, and went on the claim the Totem championship the following day by defeating Pacific Christian. The Alberni squad took third in the tournament after a Saturday win against Nanaimo District Secondary. (Alexandra Mehl photos)

The ADSS senior girls basketball team took home third place at their Totem tournament, after giving it their all.

“The girls played hard,” said Steve Sperger, coach of the Alberni District Secondary senior girls basketball team, reflecting on the Jan. 6 game against Belmont. “They worked all game long, gave their best effort. And that's all I can ask really, as a coach.”

Sperger said that the team is disappointed. They had won the Totem title last year, and aimed to win it again, he continued.

“We couldn't find our offensive opportunities as well as [Belmont] did,” said Sperger. “Defensively, I thought our girls just worked hard and gave it everything.”

“Today was definitely a challenge... we played [Belmont] last year so we had an idea of what we were up against,” said Hannah Rust, a Grade 12 student at ADSS and captain of the senior girls basketball team. “It was a pretty physical game today. So I think we're gonna have some bruises tomorrow.”

ADSS senior girls first played Kwalikum on Thursday, Jan. 5, winning 48-44. In their second game they fought tooth and nail, ultimately losing to Belmont 56-40. In their final game against Nanaimo District Secondary the senior girls won 55-44 to place third overall in the tournament.

After facing the Alberni squad, Belmont went on to play in the finals against Pacific Christian, winning 56-49.

Rust said that playing in Totem is an “unforgettable experience”.

“As a senior it's kind of bittersweet this year, just because it is our last year,” she said. “The school culture here is just amazing, I don't think you could find anything like that anywhere else.”

Natalie Clappis, Grade 12 student at ADSS and captain of the senior girls basketball team, said that Totem will be a memory she will have for the rest of her life.

“We know our bench is cheering for us. But when the crowd’s screaming and roaring for us that just makes it 10 times better,” said Clappis.

Sperger said that he is proud of the hard work and effort.

“We're not just building athletes here. We're building people,” said the coach. “You can see that growth and development as a group, how they're coming together and how they're working together to create goals for themselves and beat challenges with each other.” 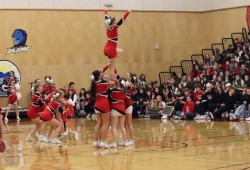 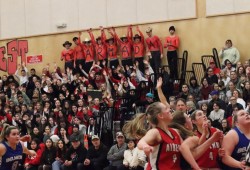