As a sign of protest, in the fall of 2020 an encampment appeared before the Port Alberni Shelter Society’s Our Home on 8th. A provincial review and progress report followed, but now BC Housing has ended its contracts with the society. (Karly Blats photos)

BC Housing has served notice to the Port Alberni Shelter Society (PASS) that it will end agreements for supportive housing, effective March 30, 2023. The decision was announced at a Jan. 5 meeting in Port Alberni. No reason was given.

PASS operates several supportive facilities in the small city, including the shelter at 3939 Eighth Avenue, the Overdose Prevention Site located at 3699 Third Avenue and the Shelter Farm south of town. PASS also has a support service agreement with BC Housing for the Capacity Expansion Shelter at 3978 Eighth Avenue (formerly the First Nations Hostel opened in 1972).

PASS provides services under contract through BC Housing for shelter facilities. They are under service contracts with other agencies for the operation of the sobering centre, the overdose prevention site and Shelter Farm.

“BC Housing has given Port Alberni Shelter Society (PASS) notice that BC Housing has ended their agreements for the supportive housing and shelter located at 3939 8th Avenue effective March 31, 2023,” wrote the provincial agency in an email to Ha-Shilth-Sa. “Over the next few months, we will be working with PASS and partners on this transition with continuation of supportive housing and shelter service for residents and clients being of utmost importance.”

While BC Housing didn’t give reason for the termination, they say that they will soon issue a request for proposals to select an operator. BC Housing said it will prioritize organizations that can ensure safety for women and vulnerable individuals, while also respecting the culture and experiences of local Indigenous Peoples.

Our Home on 8th opened in March 2019. Staffed 24/7, it offers 30 supportive housing units and a 23-bed emergency shelter. Users of the facilities have access to food, clothing, health services and support in a pet friendly building.

Funded under the Rapid Response to Homelessness program, Our Home on Eighth serves individuals who are experiencing or at risk of homelessness.

PASS’s management of Port Alberni’s shelters came under scrutiny in October 2020 when protestors set up an encampment on the lawn adjacent to the shelter facility. Allegations of shelter staff issuing long-term or permanent bans on several individuals from the shelter was one of the complaints.

The protest ended when BC Housing committed to conducting a third-party review into the allegations and concerns towards PASS.

“In response to escalating concerns about services provided by PASS for people experiencing homelessness, BC Housing initiated a review of the organization,” states the provincial agency’s report, which was released in February 2021. “BC Housing hired an external consultant to collect information and conduct the arm’s-length review.”

The report notes that a list of individuals banned from the facility contained 100 names in 2017.

“Another, more recent version has 50 names,” states the report. “How these lists came to be publicly circulated is unknown, but it has resulted in the further stigmatization of those barred individuals.”

The BC Housing Research Centre conducted a survey among staff and residents of the shelter. During that study, shelter staff identified challenges they face when it comes to disruptive tenants.

“A few residents require assistance from staff to ensure they aren’t accumulating too many items in their units,” states the report.

In addition, staff saw that some residents were taking advantage of “other, more vulnerable” tenants, and were asked to leave.

Several recommendations to improve services and safety at the shelter came from the BC Housing Consultant Review Report. An update on the status of each recommendation was issued February 2022, indicating that PASS has been working on improvements.

“Over the past 12 months, significant changes have been made to the society’s operations,” reads the Port Alberni Shelter Society Review update. “This includes new operational policies, improved access to training for staff, increased Indigenous representation among staff, and expanded relationships within the community,” 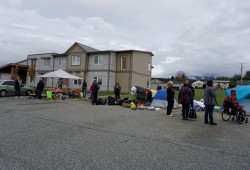