Located at 4th and Argyle Street in Port Alberni’s Uptown district, the Salvation Army served an unprecedented number of first-time clients over the recent holiday season, including many seniors. (Eric Plummer photo)

This past holiday season saw what seemed like endless snow filling communities throughout Vancouver Island. As the snow fell, the social services sectors worked hard through the month tending to weather and holiday needs of vulnerable people.

Among some services that were needed was the Salvation Army’s emergency weather response program, which provides extra mats in shelters to meet the demands of unhoused folks.

Jeffrey Baergen, executive director for Salvation Army Addiction and Rehabilitation Centre in Victoria, said that during the snowstorm the shelter on 525 Johnson street was full each night. The shelter includes 161 beds, and 30 additional mats for emergency weather response.

“We were actually over capacity each night,” said Baergen. “When it gets colder outside people are, of course, looking for more services.”

Baergen explained that one of the biggest issues facing the social services sector is staffing. Often managers have been stepping onto the front lines to accommodate the high demand.

“We can't put up a sign that says, ‘Hey, due to staffing we’re closed’,” said Baergen. “We have to make it happen.”

“We had everybody we could possibly find working our emergency weather program so that we could get people in, out of the snow,” he added.

Pastor Michael Ramsey of the Salvation Army in the Alberni Valley said that they operated with 20 mats throughout the snow storm. They were never at full capacity, though some nights they almost reached that point.

“We're hoping, very shortly here, to be able to move the mat program and put in 25 beds,” said Ramsey. “Then to turn the space into, not [a] weather dependent [shelter], and just another additional shelter in town so that we are able to fully assist those who are in most need.”

Ramsey said that he is thankful for the volunteers and community organizations that come together to provide for the vulnerable population.

“Volunteerism is the only way that we're able to provide the myriad [of] services that we do,” said Ramsey. “I'm just so thankful that, even though the need has been more significant and higher than I've ever seen it in this community, that so many people in this community [have] a big heart and are willing to step up and try, and help us, help others.”

Ramsey noted that this past December there was a “staggering” amount of first-time users seeking services provided by the Salvation Army in Port Alberni. Ramsey particularly noted food hampers.

Seniors on a fixed income who would have donated in previous years were now turning to the salvation army for support, seeking help such as food hampers, he said.

“I think the cost of living in many places has really gone up, like buying food,” said Ramsey. “Again, a senior income or any other kind of just solid fixed income, they're not going to be able to keep up with that kind of an increase in cost.”

Christmas is already a busy time the Alberni Valley Salvation Army, noted Ramsey. There is also an additional challenge to support first-time service users, he continued.

The Port Alberni Friendship Center, which is busy serving the community year-round, struggled providing services through the snow fall.

Cindy Stevens, executive director of the Port Alberni Friendship Center, said that outreach workers weren’t able to work in snowy conditions because of the dangers associated with driving in the snow.

While many of the services provided by the Friendship Center tend to slow down during closures like the Christmas holidays, the unhoused population's need for services remains consistent, said Stevens.

Though the Friendship Center remained open throughout December, it closed on statutory holidays such as Christmas day and Boxing Day. However, this didn’t stop the centre from “unofficially” providing for vulnerable communities, as they have over the past years.

Stevens and her family prepared and delivered Christmas dinners, on both Christmas day and Boxing Day, to those in the area who were most in need, she explained.

Herb Dick of Ahousaht, who is an Island Health Indigenous outreach worker in Victoria, noted that throughout December people who were seeking services also experienced holiday blues and were missing home.

“Another part [of] what [Indigenous outreach workers] do is we have cultural events,” said Dick. “We try to support, and other matters are just bringing [the] community together.”

In December the Indigenous outreach workers, also known as ey stelnexw, hosted a turkey meal. Dick said there was a Santa, drumming, singing, and brushing.

“I think that's a major thing about people who are lost, they sometimes feel like they're by themselves,” he added. “We try [to] bring the services from home to the street community, and that is through coming together, sitting together, eating together…with our local elders, and then with our Nuu-chah-nulth elders, too.” 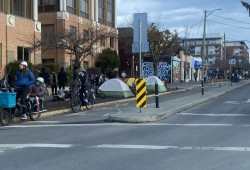 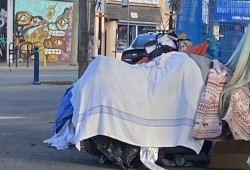