Dave Ignace sees debris from across the Pacific wash up near his home in Hesquiaht Harbour, including this sign that possibly came from a tiny US community.

An initiative that collected 56 tonnes of marine debris from Hesquiaht Harbour last June is preparing to clean up other parts of Clayoquot Sound this fall.

Clayoquot CleanUp is looking ahead to the next phase of its multi-year plan, anticipating to collect 200 tonnes of debris from the inland waterways of Clayoquot Sound over the fall and winter months. With the efforts of 75 volunteers, the initiative gathered refuse from 29 kilometres of shoreline from June 1-14. The refuse was collected in large fish farm sacs, which were loaded by helicopter to barges bound for Tofino.

It was by far the largest cleanup effort at the remote location, said Dianne Ignace, who has lived there for the last 42 years.

“They piled everything at the sand bar, and the pile was halfway up the house and twice as long,” she said. “They sat right down on the beach and picked these little pieces of plastic up.”

Dianne is among Hesquiaht Harbour’s four year-round residents, who include husband Dave, her son Jeff and daughter Korianne.  Dave lived at the site as a child before his years in residential school, then returned as an adult to raise a family of four with Dianne at the ancestral home of the Hesquiaht First Nation. Hesquiaht Harbour’s geography on the western edge of Vancouver Island makes it a deposit for the Pacific’s refuse.

“In the wintertime there’s big tides and big seas, it just washes right up,” said Dave.

With an estimated 6.4 million tonnes of marine debris entering the oceans each year, Clayoquot CleanUp was launched to promote healthy landscapes that allow wildlife to thrive while encouraging sustainable economic growth, according to the organization’s project plan. Organizers are currently fundraising to cover the remaining portion of the initiative’s $107,500 Phase 1 budget. Preparations are also underway for cleanup efforts over the fall and winter.

“We will be focussing on the inland waterways of the sound during the fall and winter when offshore weather negates cleaning operations on more exposed shorelines,” said Josh Temple, who founded Clayoquot Cleanup with Lisa Szostek. “Abandoned aquaculture sites, derelict vessels, marinas, harbours, docks and piers near villages will all be targeted during Phase 2, which we anticipate will last six months.”

Nearly all of the garbage collected from Hesquiaht Harbour was Styrofoam and plastic, material that became common in the last 70 years. Ninety per cent of this debris is being recycled.

“For many generations, especially after World War II, there was this push for consumerism and all of this unnecessary packaging,” commented Temple, who believes that the 56 tonnes gathered was a tiny sample of the existing debris in the Pacific Ocean. “The scary thing for me is that we’re only collecting the stuff that floats and makes it to the shores.”

Over the years the Ignace family has seen the rate of garbage increasing – particularly after the 2011 earthquake and tsunami that hit the west coast of Japan.

“There’s a lot more Styrofoam, and a lot more Japanese stuff,” said Dianne. “A lot of the water bottles, over half of them have Japanese writing on them.”

“After that earthquake in Japan someone came here and told us to take iodine,” said Dave. “They were worried about radiation on some of the stuff here.”

“A marine biologist told us to watch out for the starfish on the shoreline because if there’s radiation of any sort in the water, the starfish get soft and soggy and they deteriorate,” added Dianne. “It happened pretty fast, there are no more starfish.”

Clayoquot CleanUp collected twice as much garbage as organizers expected. Fortunately, a large group of volunteers tackled the growing scope of the project.

“When you do aerial or visual surveys, you don’t really have an idea until you actually get in there and start crawling around in the bush,” said Temple.

The project’s staff includes a First Nations liaison, as operations are taking place in Nuu-chah-nulth territory like Hesquiaht Harbour. Szostek credits the initiative’s success to how it has involved those most familiar with the areas targeted.

“People who live up there, people who go visit there know the land way more intimately than anyone could flying over it,” she said.

Beyond Hesquiaht Harbour, the progress of Clayoquot CleanUp will depend on donations as organizers fundraise to cover the remaining costs of helicopters, barges, tugboats, zodiac vessels lodging, food and the hand full of staff who guided operations in June.  So far support has come from businesses, in-kind donations and a GoFundMe campaign, but government assistance is yet to materialize.

“It’s disappointing that local organizations have to deal with the fallout from the marine highway with limited resources and little funding,” he said. “The amount of marine debris we are seeing in our ocean from Canada’s increasing trade endeavours is astounding and it is important [that] environmental responsibility is maintained.”

In his response, Justin Trudeau mentioned the $1.5 billion Oceans Protection Plan the federal government has committed to over the next five years.

“We are moving forward to protect our coasts and the people who make a living along it,” said Trudeau. 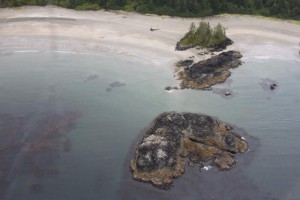 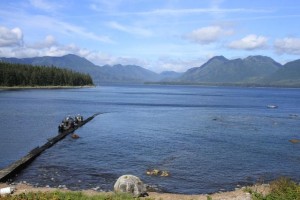 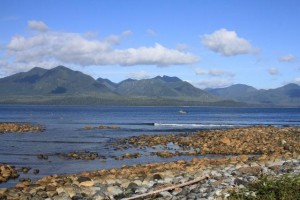