For the first time in recent memory, a coming of age celebration was hosted at the House of Huu-ay-aht for 13-year-old Helena Howard and Cierra Nookemus, 12. (Heather Thomson photos)

For centuries the First Nations of British Columbia have hosted coming of age celebrations, marking the time when a girl becomes a woman. The potlatch ban came into place in 1885, making traditional celebrations like this challenging. Many nations continued the practice in private, but they were not able to bring it out in the open again until the ban ended in 1951.

Because they lost their traditional practice for so long, many families no longer celebrate life’s big moments through a community celebration like a potlatch.

On Saturday, Oct. 21, the Howard family held a coming of age celebration for their 13-year-old daughter Helena Howard. Just before the event, Helena asked if her 12-year-old cousin Cierra Nookemus could join the celebration. Both young women were honoured and given traditional names.

After receiving an invitation from Helena’s parents, Tammy and Cory Howard, I decided to attend the event. I wanted to help honour Helena. I was also curious and somewhat envious of such a rich cultural event, and so we packed up the truck with camera gear and made the trip to Anacla to check it out.

Elders tell me this is the first time they remember a coming of age being celebrated in the House of Huu-ay-aht. Many of them said they could not recall the last time the Nation hosted such an event. This was a special day in Anacla.

Lunch was served and everyone socialized at the House of Huu-ay-aht. The girls ran around visiting their friends and family. It was like any other luncheon in Anacla, that is until the girls were whisked away to the Anacla Government Office to get ready. I was asked to come over to take some photos, and when I arrived I could not believe the transformation. The young girls who were playing at the House of Huu-ay-aht only a few minutes earlier were gone, and two beautiful young women stood before my camera, all dressed in white and ready for their big moment.

Back in the House of Huu-ay-aht, excitement was running high. The only comparison I can offer is when people wait to catch the first glimpse of a bride on her wedding day. Dancers gathered at the door with their shawls spread wide to keep anyone from sneaking a peek of the guests of honour before it was time. As eagle down began to float around the ankles of the dancers, rattles and a voice rose from the circle, drums followed, and finally two sea serpents emerged. As the voices and drums grew louder, a canoe began rising above the dancers, on the shoulders of men. Sitting in the middle were Helena and Cierra, with two guardians by their sides.

The canoe made its way down the centre aisle and circled the front of the building. Dancers followed, all paddling to the beat of the drums and voices that sang out. Finally, with tears running down their faces, the young women were seated at the front of the room with their guardians.

The emcee for the event explained the ceremony and its importance. He also introduced the four guardians and explained their role was to protect and guide these young women for the rest of their lives. This was also our responsibility too, he explained, adding that everyone in the room plays a role in ensuring Helena and Cierra grow up with the knowledge that they are special and hold an important place in society – that they should be respected and respect themselves.

Helena’s father, Cory explains that aside from receiving a new name and finding out who their relatives are, teaching the young women they deserve respect is the most important part of the event. “It’s about raising them up and showing off how important they are because they bring life into the world,” Cory explains. “They need to be reminded that they deserve respect.”

Hereditary chiefs from several nations were then called up to wash the young women’s feet. Cory explains that this is an important part of the ceremony. By bowing down in front of the young women and washing their feet the chiefs are putting themselves below the young women, when they would usually be above them. It is a sign of respect and a way of honouring them on their special day.

The final step in the official ceremony was giving each of the girls a new name. Helena was given the name of her grandmother Marie Nookemus, which has come from her grandmother before her – Kla-qwo-klee-nulth. Sara Dennis, hereditary chief for the Ka:’yu:’k’t’h’/Chek’tles7et’h’ First Nation, offered Cierra her name, Kluu-ath-apee.

As the drumming, singing, and dancing continued, the room was alive with excitement. People cheered and danced at their seats. The voices grew louder and more drums joined the circle as the Huu-ay-aht dancers joined the Howard family, the Muchalaht/Mowachaht Nation, for a shared song.

It was then time to share a meal and socialize with friends and family, before the dancing and singing into the night.

Looking back on the event, that feeling of cultural envy is even stronger. I think back to my own coming of age. I think I was taken to the local drug store for a quick shop for feminine hygiene products, told once a month I had to be careful in swimming pools, and sent on my way. It makes me wonder, if we all learned to celebrate this stage in life, would women respect themselves more and demand the same of the men in their lives? If we marked this change in our life with pride, would men understand it is something they too should celebrate and respect?

I hope that feeling of pride and respect follows Helena and Cierra through their lives, and that the message from Saturday is not forgotten. I also hope their coming of age celebration is only the beginning of many more big moments at the House of Huu-ay-aht. 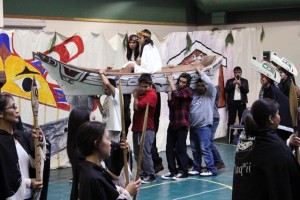